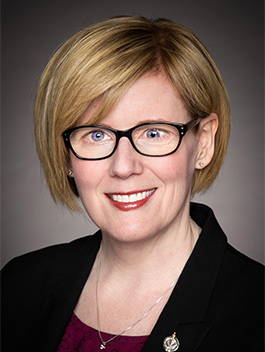 Represents the riding of Delta

A successful lawyer, dedicated volunteer, and Paralympic swimmer, Minister Qualtrough is a strong advocate for Delta, with a commitment to addressing inequality and championing diversity.

Committed to equity and inclusion, Minister Qualtrough has practised human rights law at the federal and provincial levels. She chaired the Minister’s Council on Employment and Accessibility in British Columbia, and was an adjudicator with the Workers’ Compensation Appeals Tribunal. Minister Qualtrough has been visually impaired since birth.

Passionate about the power of sport and physical activity to change lives, Minister Qualtrough has volunteered locally, nationally, and internationally, including with the International Paralympic Committee and for the Toronto 2015 Pan and Parapan American Games. She has been President of the Canadian Paralympic Committee and Chair of the Sport Dispute Resolution Centre of Canada. She was also on the Board of the Canadian Centre for Ethics in Sport, and was Vice-Chair of the Delta Gymnastics Society.