From 2009 to 2010, Health Canada consulted with key stakeholders, including the Canadian public, on policy options to improve the use of precautionary labelling in identifying the potential presence of priority allergens in prepackaged foods. This consultation process included both an online questionnaire and a series of face-to-face public meetings held across Canada. The on-line portion of this consultation was launched on November 13, 2009 and closed on February 24, 2010. The public meetings were conducted from November 23 to December 9, 2009 in seven Canadian cities: Halifax, Toronto, Vancouver, Edmonton, Winnipeg, Ottawa, and St-Hyacinthe. Stakeholders were pre-notified of these consultation activities through targeted mailings to key allergen stakeholders, and through notifications sent through Health Canada's Food Allergies E-Notice. These events also received media coverage across Canada.

Key findings from both the on-line consultation and the face-to-face workshop sessions are presented below.

Key findings from the on-line consultation and the workshop sessions

The objective of the online consultation was to generate quantitative and qualitative data on stakeholders' opinions regarding Health Canada's proposed options for its food allergen precautionary labelling policy review. Objectives of the workshop sessions were: 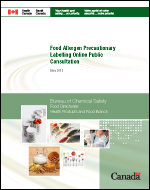 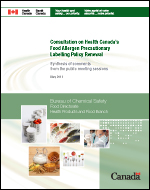 A total of 354 individuals and representatives of stakeholder organizations completed the on-line consultation. In addition, 173 participants from the following key stakeholder groups participated in the workshop sessions:

Individuals, allergic consumer associations and numerous other organizations voiced a preference for the "fully regulated option" (option 4), identifying the next best option as a "proposed mix of regulated and non-regulated" using select risk management tools. The food industry identified a preferred option which would incorporate a "mix of regulated and non-regulated" risk management tools along with the "enhanced voluntary approach" (option 2, without the consumer notification system) as the next best option.

Overall, the on-line consultation showed that the mixed voluntary/regulatory approach (option 3) was rated the highest in terms of comfort level by industry stakeholders, and was considered the second-best by all other subgroups. Furthermore, the majority (65% of all participants) of respondents felt comfortable with option 3. This trend was observed across all types of stakeholders (53% of industry representatives, 68% of individuals, 73% of allergic consumer associations, and 48% of other organizations). Some stakeholders also suggested another possible option for Health Canada to consider, namely a "progressive approach" to be based on the monitoring of the compliance of the food industry to a renewed voluntary policy. Within this option, identification of unsatisfactory compliance levels with the policy would eventually trigger the use of mandatory measure(s) imposed through regulations.

Overall, the main concerns expressed towards non-regulated approaches were related to the potential for misinterpretation of the absence of food allergen precautionary statements (i.e. not knowing if safety has been assessed when no precautionary statement is present), the variability of standards and procedures related to food allergen precautionary labelling risk assessment and controls across the food industry, the willingness of the food industry to implement allergen Good Manufacturing Procedures, and the enforceability of allergen control measures implemented on a voluntary basis. On the other hand, the non-regulated approaches were identified as less costly and their implementation was viewed as being achievable in a shorter period of time, as well as providing more flexibility to the food industry.

The main concerns expressed towards regulated approaches were related to the lack of food allergen thresholds, the sense of false security that the mandatory nature of a measure could produce among individuals with food allergies, the time and costs associated with the implementation of mandatory measures across the industry, and the ways in which mandatory requirements would be enforced for imported products. The main advantages identified for the regulated approaches were both the accountability of the food industry and the provision of a fair and common market being assured by imposing the same standards across Canada and for domestic and imported foods.

The analysis of opinions regarding specific features of the proposed policy options suggests that stakeholders are largely, although not unanimously, supportive of limiting the wordings used for allergen precautionary labelling to two or even one permitted statement. A qualitative review of opinions towards the two proposed wordings for allergen precautionary statements shows that "May contain X" was still the most preferred statement.

Stakeholders largely agreed on the need for guidance in the areas of: Good Manufacturing Practices, standardized allergen risk assessment-related guidelines and allergen-related educational programs for both the public and the industry. Many respondents expressed their willingness to be involved in the development of these guidelines/programs.

Consumer notification systems received mixed reactions as a proposed risk management tool. Stakeholders raised important concerns towards consumer notification systems in general and questioned their credibility through examples in other jurisdictions, pointing out concerns of accountability, accessibility, scope, and associated costs. However, these systems were also perceived as a way to customize, nuance or expand/complement the available information on product risk assessments. Among the proposed systems put forward by Health Canada, the potential to "use a front of package symbol to indicate that no precautionary label was needed after the conclusion of a risk assessment" was the most preferred notification system option across all stakeholders. Other consumer notification means or systems were also suggested for Health Canada's consideration.

Overall, the information received by stakeholders from the on-line questionnaire and during the face-to-face workshop sessions indicated that allergic consumers are perceived to be at risk due to issues such as: 1) the overuse of allergen precautionary statements (e.g. precautionary statements believed to be used when there is no real risk, for legal protection, etc.); and 2) consumer difficulty in interpreting the level of risk posed by a product using these statements (e.g. when precautionary statements are absent, when they express different level of risks or because of too many different wordings, etc.). In fact, not knowing if safety has been assessed when no precautionary statement is present was identified as the most important issue by 80% of the respondents to the on-line consultation, and was also frequently brought forward in the workshop sessions. These findings provide the impetus for Health Canada to move forward with the CFIA and stakeholders to develop of a renewed policy on food allergen precautionary labelling.

Health Canada will closely examine the information gathered through the online and the face-to-face consultations when updating its policy on food allergen precautionary labelling. Updates to the policy will be made available on Health Canada's Food Allergen Labelling Web site and communicated to stakeholders when completed.

This work has been undertaken by Health Canada's Food Directorate in accordance with its commitments through the Government of Canada's Food and Consumer Safety Action Plan to help modernize and strengthen Canada's safety system for food.