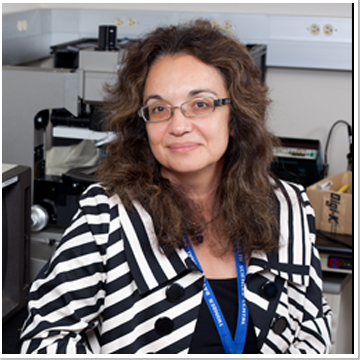 Dr. Alla Reznik arrived in Canada in 2003 from Israel to complete her post-doctoral fellowship in medical imaging at the University of Toronto. Since then, she has joined Lakehead University as a professor, founded a company, been named Canada Research Chair in Physics of Radiation Medical Imaging and is now commercializing an innovative technology that could save the lives of thousands of Canadian women.

The technology is especially beneficial for the 40% to 50% of women aged 40 to 74 who have dense breast tissue. These women often end up with false-negative results after regular mammograms, according to the U.S. National Cancer Institute. They are also considered at higher risk of developing breast cancer, both genetically and because conventional imaging methods don’t work as well for them.

Two other advantages of Dr. Reznik’s advanced technology are its portability and cost. The imaging device that she and her research team have designed can be rolled from room to room and plugged into any regular 110-volt outlet. It can also run on batteries for up to 2 hours – a real benefit in remote communities.

That accessibility is a major advantage. Currently, says Dr. Reznik, advanced breast imaging is not available between Sault Ste. Marie and Thunder Bay, a distance of about 700 km. Her “plug-and-play” device could be a game-changer for hospitals and patients in these areas.

“Dr. Reznik is a true visionary, international collaborator, and role model and mentor to her students. Her technology has the potential to impact women all across the world.”

It also has the potential to generate cost savings for the health-care system. “Our machine will cost about half a million dollars”, says Dr. Reznik. “Although that’s not peanuts, it will make a big difference to hospitals compared with a $2 million MRI machine”. As well, detecting cancer at earlier stages – which this technology aims to do – makes the treatment more efficient and less costly.

It’s not on the market yet, but clinical trials are expected to begin shortly. If all goes well, the device will be manufactured by Radialis Medical, the company Dr. Reznik founded to commercialize the technology. The units are likely to be made in Thunder Bay, creating jobs.

“Dr. Reznik has been the catalyst for this project”, says Sasha Bubon, whose PhD work was supervised by Dr. Reznik. “Without her encouragement and energy to keep pushing it forward, it wouldn’t be happening”.

When she began her career 20 years ago, Dr. Reznik didn’t foresee herself inventing a new technology or launching a company. But during the course of her research, it occurred to her that as a physicist, she could save lives.

“The moment I realized I could make a difference, I became even more passionate about my research”, she says. “I would like to see this technology fully integrated into clinics across Canada for the benefit of cancer patients everywhere”.