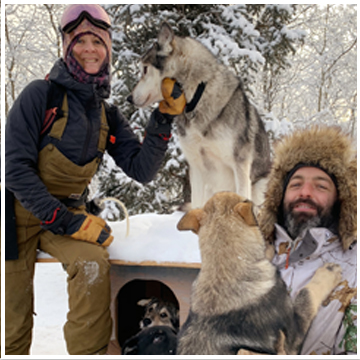 In late March, people across most of Canada celebrate the warmer temperatures. But in Whitehorse, Yukon, the forecast often calls for overnight lows well below zero. Far from being discouraged, Raphaëlle Couratin is in her element. This is the time she sets off on a multi-day March break ski expedition to share her love of the northern wilderness with locals and tourists alike.

Raphaëlle immigrated to Canada from France with her partner, Fabien Cayer-Barrioz, in 2016. Having grown up in the French Alps, she feels right at home in Fish Lake, an off-grid community in the mountains near Whitehorse.

“We were looking for a place where the winters were longer than in France, with snow, cold and uncrowded ski trails to run with our dogs,” she says. “We love being so far north that we can see the northern lights.”

Even though she only settled in the Whitehorse area in 2016, Raphaëlle has already become a champion of the French language in her community. She teaches French as a second language at the Yukon Montessori School, volunteers as a ski coach and runs Yu’Ski Expeditions—a business she started with Fabien—which offers ski expeditions for youth, featuring sled dogs hauling the gear. She recently expanded the business to add Yu’Speak French, which combines outdoor camps with French immersion.

Dominic Bradford, head teacher at the Yukon Montessori School and Raphaëlle’s employer, says: “Raphaëlle was a treasure to find. As a teacher, she’s really creative at responding to challenges on the fly. And now she’s hitting a great niche, offering outdoor experiences to kids in a French environment. She’s a real Yukon success story.”

Raphaëlle first visited Canada at the age of 13 with her family, spending time in Quebec. She returned in her thirties with Fabien in 2014 to train sled dogs in Whitehorse for a participant in the Yukon Quest. They fell in love with the area, and knew they’d return.

Raphaëlle helped save the day for working parents when schools closed down due to the global COVID‑19 pandemic. She began offering French immersion overnight and day camps at Yu’Ski. Stressed-out parents could focus on their work again while Raphaëlle kept the kids practising French and spending plenty of time outdoors.

Guillaume Nielsen, an Industrial Research Chair at the Yukon University Research Centre, has known Raphaëlle since her earliest days in Fish Lake, and sent his kids to Yu’Ski during the COVID-19-related school closures.

“She’s teaching kids useful wilderness skills, resourcefulness and confidence in the outdoors, and using nature as a tool to help them feel better about themselves.”

He particularly appreciates her community spirit. “When you live in a place like Fish Lake or Whitehorse—or anywhere in the Yukon, really—you always need help from other people,” he says. “Whether it’s because of a snowstorm or the extreme cold or an emergency repair, this is a place where you count on your community, and Raphaëlle is always ready to pitch in.” 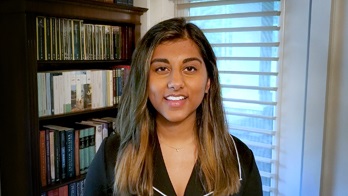