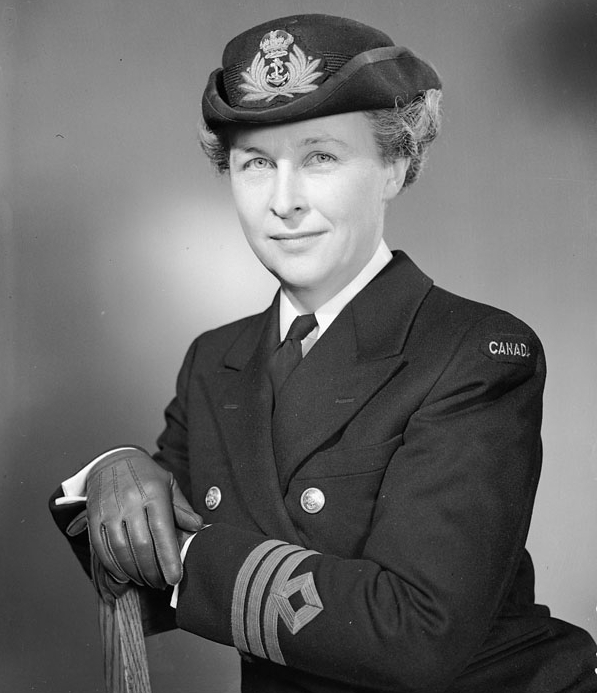 “Service life was new to Canadian women, but they have proved their ability not only to accept it but to bring great credit to it. They in turn have profited immeasurably. Few of us will leave the service without widened horizons based on the training, the travel, the comradeship and teamwork which we have enjoyed in these three years of naval life.”

Women are called to serve 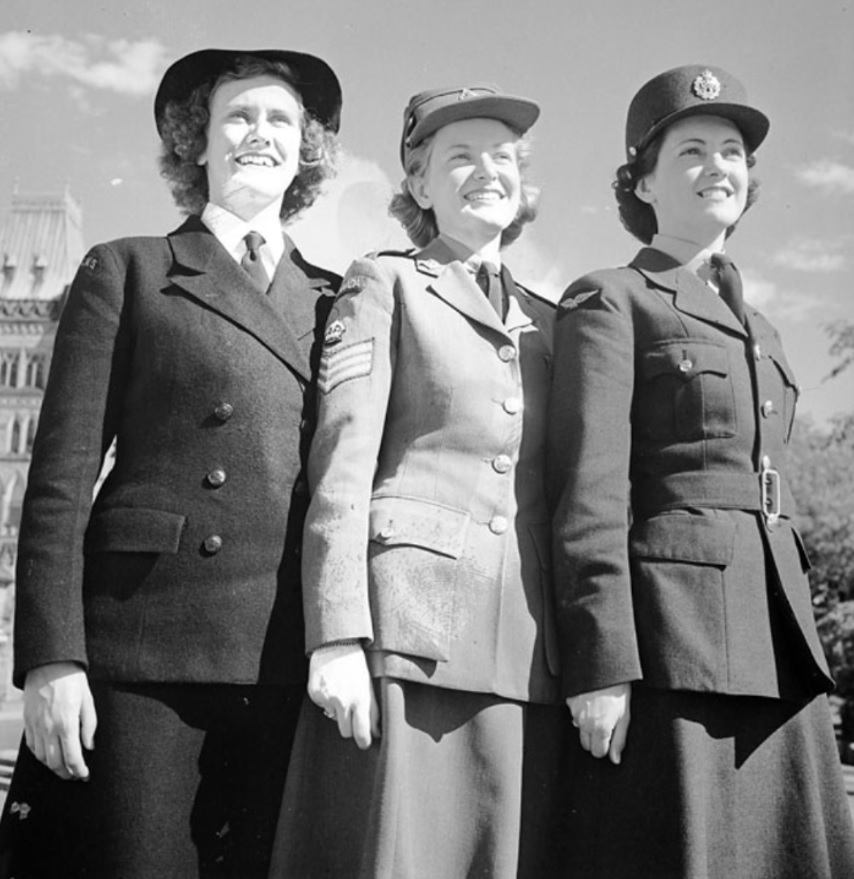 When service to their country was needed during the dark days of the Second World War, Canadian women answered the call to duty. July 31, 2022, marks the 80th anniversary of the establishment of the Women’s Royal Canadian Naval Service (WRCNS).

From the time of its inception until being disbanded in August 1946, nearly 7,000Canadian women, commonly referred to as ‘Wrens,’ served their country. . They also ‘laid the keel’ to increasing gender equality across Canadian society at large and for subsequent generations of women wanting to serve in the Canadian Armed Forces.

The need to recruit women into the armed forces stemmed from wartime personnel shortages among all three services. When Canada entered the Second World War in September 1939, Canadians were called to mobilize for the war effort. Thousands of men volunteered for enlistment, but as hostilities dragged on, the pace of enlistment failed to fulfil increasing manpower requirements.

All three services initially rejected the idea of allowing women to serve. The Royal Canadian Air Force (RCAF) and Canadian Army eventually changed course with the creation of the RCAF Women’s Auxiliary and the Canadian Women’s Army Corps (CWAC) in 1941. A year later, the Royal Canadian Navy (RCN) followed suit and created a separate service for women. 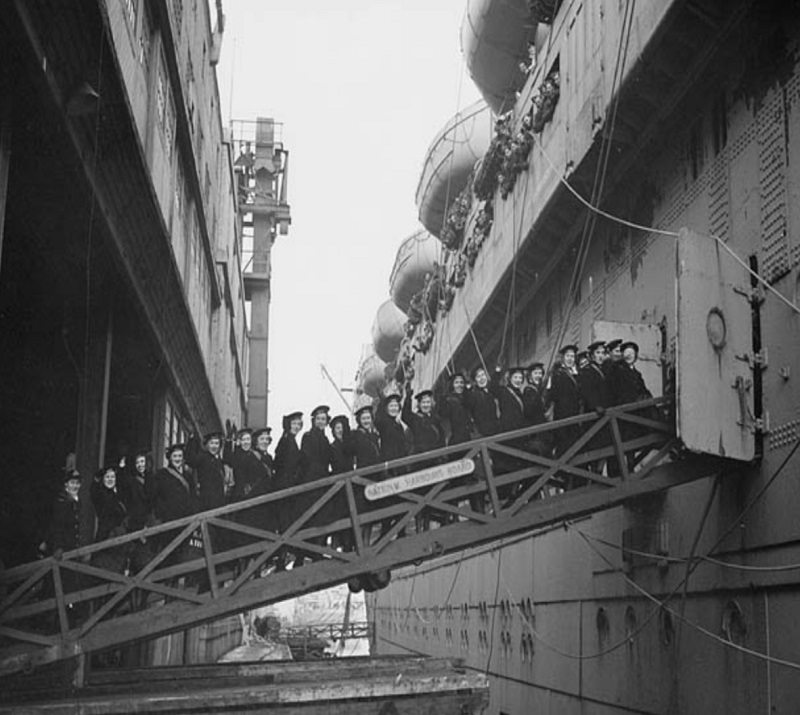 On July 31, 1942, the WRCNS was established for servicewomen to fill shore positions, freeing men for active duty at sea. With the help of their British counterparts in the Women’s Royal Naval Service, the WRCNS began “recruiting women between the ages of 18 to 45, except those with dependents or children under 16 years of age,” with progressive pay “commencing at 90 cents a day during the basic training period, [and] extra daily allowances being given according to the Wren’s ability in her particular branch.”Footnote 2

To facilitate the transition from civilian life to the military, newly recruited Wrens conducted their basic training at HMCS Conestoga in Galt, Ont. This training facility was commanded by Commander (Cdr) Isabel MacNeill.

“As captain of a ship in the RCN,” reported The Tiddley Times, a newspaper produced by and for the Wrens, “Isabel MacNeill is the only woman outside of the Royal Family, who rates being piped over the side, when coming aboard or going ashore. Every Canadian Wren is proud of her.”Footnote 3

These new recruits were expected to carry out a wide range of non-combat support and clerical jobs for the duration of hostilities. Wrens continued with their trade training at other training establishments, namely HMCS Cornwallis in Deep Brook, N.S., and HMCS St. Hyacinthe in Saint-Hyacinthe, Québec. They trained to be wireless telegraphic operators, cooks, plotters, motor transport drivers, coders, supply assistants, postal clerks, pay writers, sail makers, and more.

Wrens worked at a variety of non-combat, shore-based trades at bases and units across Canada as well as overseas. Just over 1,000 Canadian Wrens served abroad in the United States, namely Washington, D.C., and New York City, in Great Britain, and in Newfoundland, then a separate British dominion and therefore considered an overseas posting.

With the introduction of women into a previously all-male Navy, a suitable women’s uniform was required. The uniform evolved over the course of the war with a variety of kit issued to Wrens. In a loosening of strict social norms for women’s dress, trousers – once considered men’s attire – were authorised for Wrens in the Communications Branch.Footnote 4

The uniform proved to be a source of pride for servicewomen.

“Somehow the donning of a uniform (even the work smock) seemed to change us,” explained Wren Rosamond ‘Fiddy’ Greer. “We were transformed into a sameness that affected strong feelings of camaraderie and unity. We were Wrens […] and we were very proud of it.”Footnote 5

Sports and physical activities of all kinds were an important part of service life for Wrens, promoting fitness, camaraderie and esprit de corps. 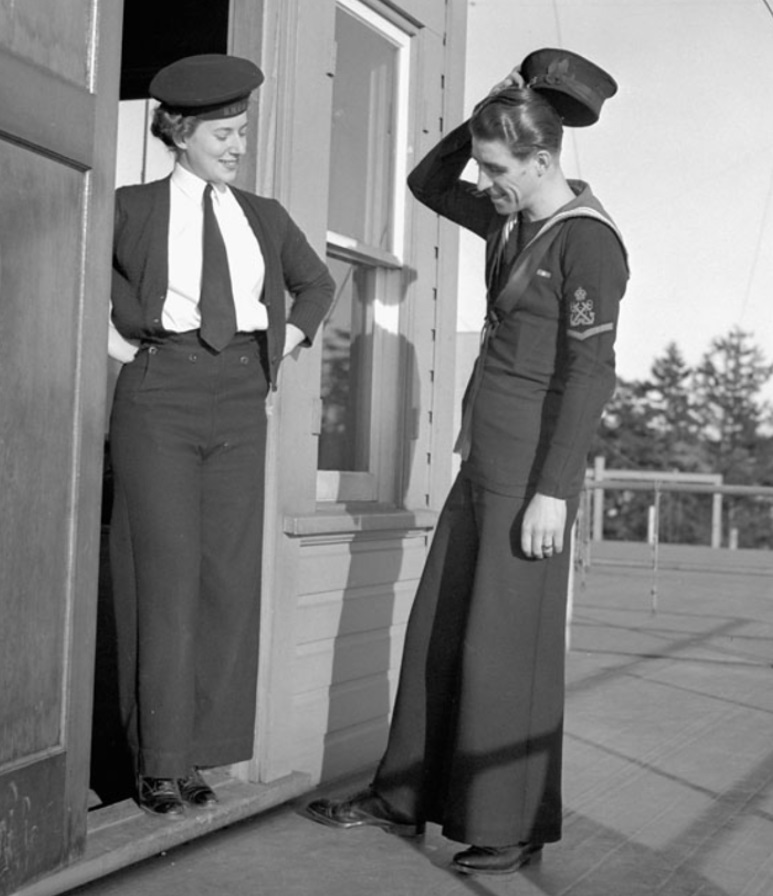 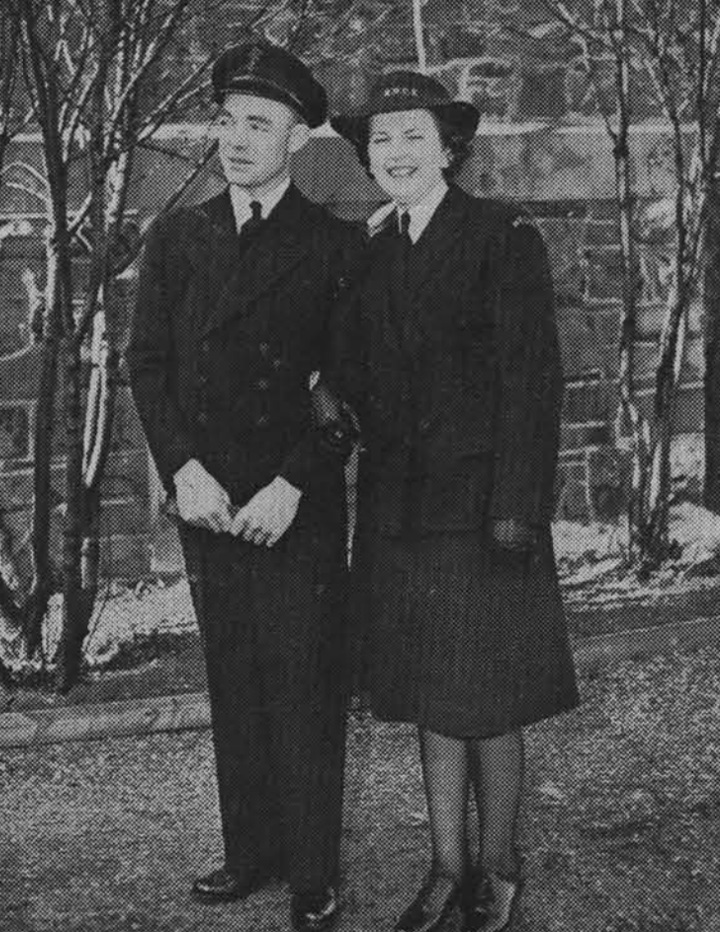 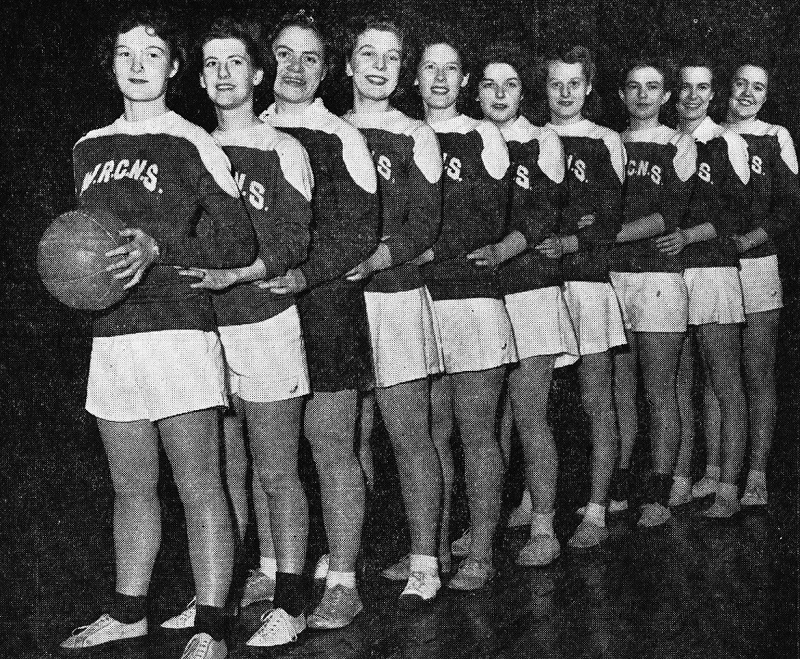 Just like their male RCN counterparts, many Wrens chose to get married while in service. A May 1943 edition of The Crow’s Nest announced that the marriage of Wren Doris Elizabeth MacLean and sailor Albert Kerr made history. The couple became the first ratings (non-commissioned members) in RCN history to join in wedlock during a ceremony in the chapel of HMCS Kings in Halifax.Footnote 6

Wrens jointly celebrated life’s milestones just as they also mourned together. Though no Wrens were killed as a result of combat, 11 WRCNS members lost their lives due to disease or accidents.

“Again we mourn the death of another Wren,” announced The Tiddley Times regarding the passing of Wren Ruth Floyd at the Ste. Anne Military Hospital in Montreal. She was laid to rest in the Field of Honour, at Mount Royal Cemetery.Footnote 7 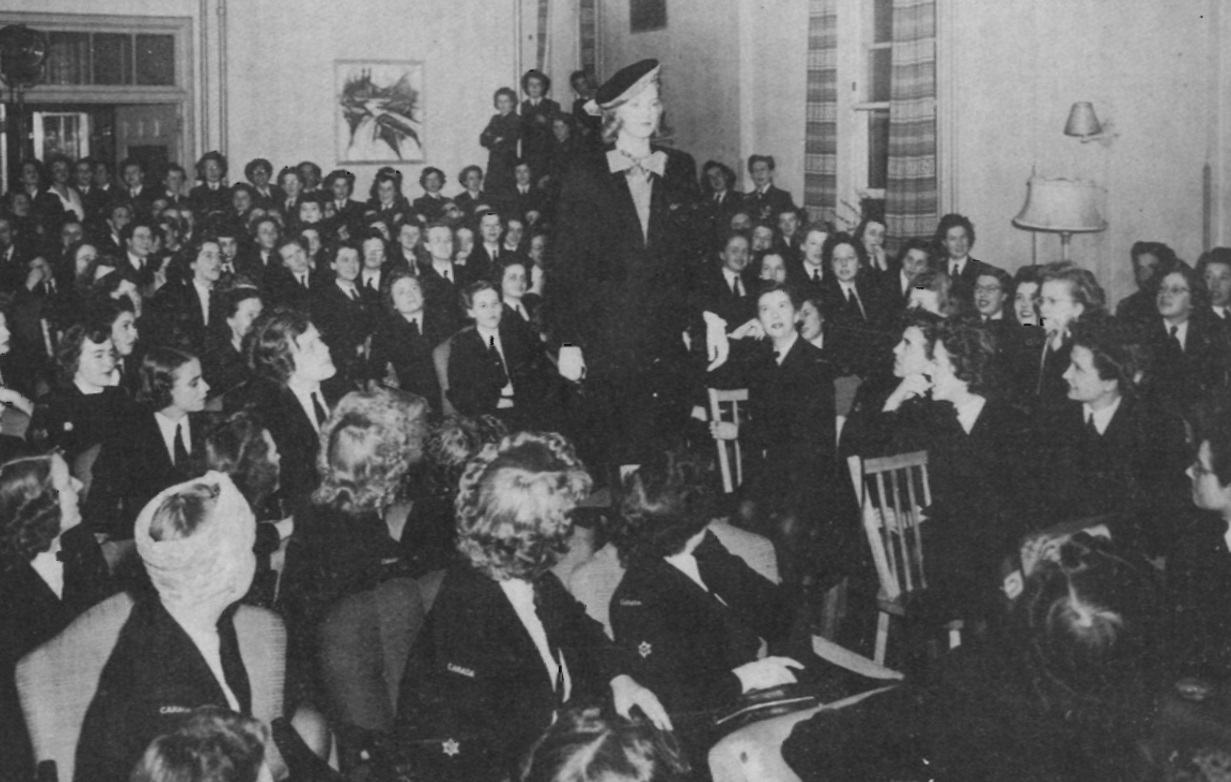 As it became evident that the end of the war in Europe was approaching, Wrens, just as other service members, prepared to make the transition to civilian life. One lecture given to a group of Wrens in Ottawa was on the subject of “making the most out of the least” with the $100 clothing allowance servicewomen would receive upon demobilization. “The highlight of the display,” declared a write-up about the ‘fashion show’ in The Tiddley Times, “was the beautiful navy blue suit and smart beret to match which were made-over from a Wren uniform and round rig.”Footnote 8 There was a necessity to economize even after the war ended with rationing and shortages still ongoing.

Victory in Europe (VE Day) came on May 8, 1945, and with it the end of the war in the West. The WRCNS was disbanded in August of the following year, ending a chapter of Canadian naval history. Recognition was made of the Wrens’ service and their tremendous contributions to the Navy.

“They joined because their country needed them,” expressed Cdr William Strange, Director of Naval Information, in an August 1946 CBC Radio address marking the end of the WRCNS “It might be that a brother was already in the Service, or merely that they hoped to get a glimpse of blue water, or perhaps just generally liked the idea of being in the Navy. Whatever the reason for joining, they came in prepared to go anywhere, or do anything the Naval Service might require of them.”Footnote 9

Women returned to naval service in the 1950s, first as members of the Royal Canadian Navy (Reserve) beginning in 1951. A few years later, women were permitted to enlist in the Regular Force, no longer as part of a separate service.

However, their service during the Second World War changed Canadian society forever. While men were at sea, women worked in every sector of the economy and every field of national service, laying the foundation for the fight for women’s equality in the decades that followed.

Radio address quoted in The Girls of the King’s Navy, p. 143.