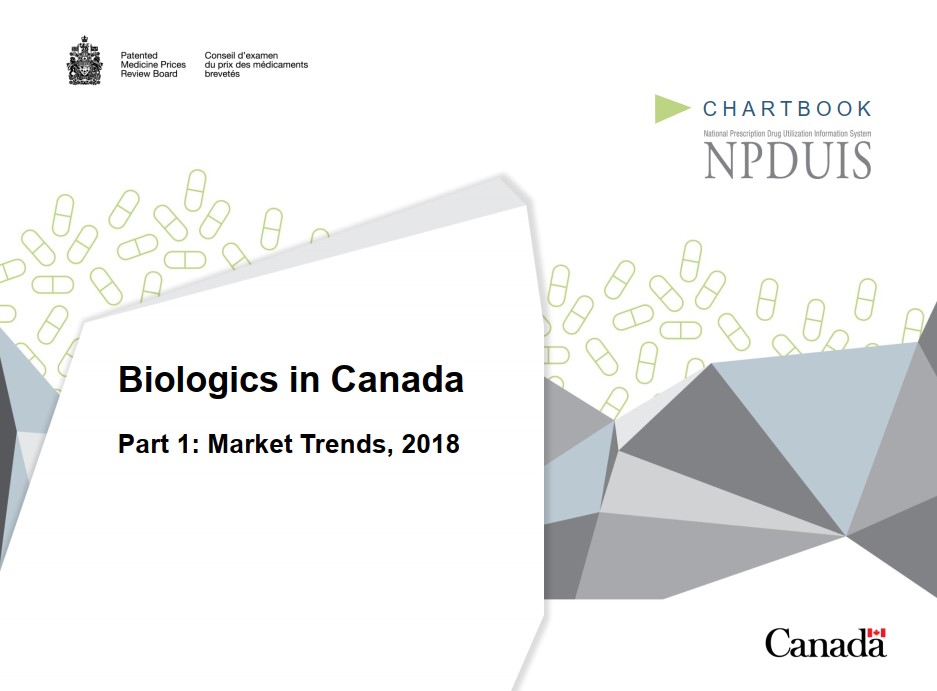 Biologic medicines are an important segment of the global pharmaceutical market. In Canada, sales of biologics reached $7.7 billion in 2018, placing Canada among the top-ranked countries in the Organisation for Economic Co-operation and Development (OECD) in terms of per capita spending.

Given the high use and cost of biologics in Canada, biosimilars offer an opportunity for significant cost savings. However, despite being on the market for over a decade, the savings from biosimilars have yet to be fully realized.

This analysis examines the market dynamics of biologics in Canada and compares Canadian and international trends in sales, pricing, and biosimilar uptake.

This overview of the biologic space sets the stage for the second publication in this two-part chartbook series. Biologics in Canada. Part 2: Biosimilar Savings, 2018 uses recent Canadian and international trends to expose the current and future cost savings that could be realized through increasing the uptake and/or lowering the prices of biosimilars in Canada.

Biologics are a class of medicines formed from living organisms or from their cells using advanced biotechnology processes. They are typically larger and more complex than chemically produced pharmaceutical drugs. In Canada, biologic drugs are listed in Schedule D of the Food and Drugs Act.

Biologics are a high-growth segment of the pharmaceutical market. Sales of biologic medicines in Canada have tripled over the last decade, increasing by 14.6% in the last year alone. Canadian approved biologics also demonstrated a strong growth internationally, with median OECD sales for these medicines almost doubling over the same time period.

The first biosimilar was introduced in Canada in 2009. By 2018, a total of nine biologic medicines had one or more biosimilars approved for sale in Canada, offering the promise of lower prices and market competition. However, biosimilar sales only amounted to $146 million in 2018 or 1.9% of the $7.7 billion biologic market.

This is a complex market space, and while there has been a successful uptake of biosimilars in many other countries, Canada has lagged behind. One clear example of this is the billion dollar Canadian market for infliximab. In 2018, the originator biologic, Remicade, still accounted for the vast majority of infliximab sales although biosimilars had been available for a number of years.

This analysis focuses on biologic medicines with sales in the Canadian market as of 2018.

Biologic medicines were selected for analysis based on the following criteria:

All insulin biologics were included in the analysis, regardless of whether they required a prescription in Canada.

Biologics containing the same medicinal ingredients as those identified in the List of Medicines were included in the international analysis.

The international markets examined include the Organisation for Economic Co-operation and Development (OECD) members, with a focus on the seven countries the PMPRB currently considers in reviewing the prices of patented medicines (PMPRB7): France, Germany, Italy, Sweden, Switzerland, the United Kingdom, and the United States.

The results reported for the private and public drug plans in Canada reflect the biologics selected for this study. This selection may vary from other PMPRB reports.

Drug costs reported are the amounts accepted toward reimbursement and do not reflect off-invoice price rebates or price reductions resulting from confidential product listing agreements.

Exclusions: To improve consistency in the analysis of international comparisons, certain therapeutic classes, such as sera and immunoglobulins and diagnostic agents were excluded from the sample analyzed.

This section reports on the market dynamics of biologics approved in Canada, exploring domestic and international trends for these medicines.

The results primarily reflect the sales and use of originator biologics, as they make up almost the entire Canadian market.

The biologic medicines approved in Canada also made up a large share of pharmaceutical sales in international markets. The median OECD sales share of these medicines was 26.5% in 2018, slightly lower than in Canada, which ranked fourth among the OECD countries.

Note: The analysis includes all prescription biologics and insulin biologics sold in Canada as of 2018.
Countries with limited sales data were excluded from this analysis.
Data source: IQVIA MIDAS® Database, prescription retail and hospital markets, 2018. All rights reserved.

Canadians spent an average of $208 per person on biologic medicines in 2018. This represented the third highest per capita sales among the OECD countries, well above the international median of $135.

Note: The analysis includes all prescription biologics and insulin biologics sold in Canada as of 2018.
Countries with limited sales data were excluded from this analysis.
Data source: IQVIA MIDAS® Database, prescription retail and hospital markets, 2018. All rights reserved.

The average price of originator biologics in Canada was the fourth highest in the OECD in 2018. While average US prices were considerably higher than those of any other country, the international median price was 16% lower than the Canadian level.

Note: The analysis includes all originator prescription biologics and insulin biologics sold in Canada as of 2018.
Countries with limited sales data were excluded from this analysis.
For details on how foreign-to-Canadian price ratios are calculated, see the reference documents section of the Analytical Studies page on the PMPRB website.
Data source: IQVIA MIDAS® Database, prescription retail and hospital markets, 2018. All rights reserved.

Biologics are specialty medicines that generally have high treatment costs. This section explores the cost of these medicines to public and private payers in Canada.

The analysis of public payers focuses on the jurisdictions participating in the NPDUIS initiative: all of the provincial public plans (with the exception of Quebec), Yukon, and the Non-Insured Health Benefits (NIHB) Program. These plans together account for approximately one third of the total annual spending on prescription drugs in Canada.

Note that plan designs, reimbursement policies, and reporting practices, as well as variations in the demographic and disease profiles of the beneficiary populations, vary widely across jurisdictions and limit comparability of the results.

In Canada, the sales of originator biologics are highly concentrated, with the 10 top-selling medicines accounting for 55% of biologic sales or 17% of the total pharmaceutical market in 2018.

Table 2.1 Market share for the 10 top-selling originator biologics in Canada, 2018

Note: Sales are reported at the trade name level and include all indications.
Data source: IQVIA MIDAS® Database, prescription retail and hospital markets, 2018. All rights reserved.

High-cost medicines account for 70% of biologic spending in Canada

Spending on biologic medicines made up 27.3% of the drug costs for both public and private plans with data reported in 2018.

The retail market for biologics in Canada is almost equally split between public and private payers. The variation across jurisdictions is influenced by individual plan designs.

Although biologic medicines represented 27% of the total drug costs for Canadian public and private plans in 2018, their share of claims was much lower, at 1.5% and 1.9%, respectively. This is due, in part, to the high cost of biologics relative to other types of medicines. Also, because they are delivered by infusion or injection, many biologics may not be dispensed as frequently as other medicines.

The variation among provinces is influenced, in part, by the types of public drug program offered in each jurisdiction and the medicines that they cover.

The biologic share of drug costs in the private market in each province is likely impacted by their coverage in the public drug programs.

An increasing number of biosimilars have entered the market in recent years. While European countries have experienced some success in terms of early market entry, price discounts, and uptake, Canada has lagged behind.

This section explores some of the differences between Canadian and international markets in terms of the number of biosimilar approvals, as well as uptake and pricing, based on publicly available information. It also looks more closely at the uptake of individual biosimilar medicines available in Canada.

The time between the approval and first sales of biosimilars medicines in a market is influenced by a variety of factors including the length of the remaining patent protection for the originator biologic and any relevant patent litigation, as well as the manufacturer's decision to launch a biosimilar and the timing of that decision.

As of the end of 2018, biosimilars for 15 distinct biologic medicines were approved by the European Medicines Agency (EMA), the US Food and Drug Administration (FDA), or Health Canada, with the majority introduced to the market within the last four years.

In 2019, biosimilars for trastuzumab and rituximab were approved by Health Canada and recorded first sales. In addition, first sales were recorded for three other biosimilar medicines: bevacizumab, insulin lispro, and pegfilgrastim.

Table 3.1 Initial biosimilar approvals and market availability in Europe, the US, and Canada as of Q4-2018

* Approved or will be approved via 505(b)(2) pathway in the United States.
† Lovenox was not approved under a Biologic License Application in the US. While generic versions of the originator medicine have been approved under the FDA’s Abbreviated New Drug Application, they are not reflected in this analysis.
Data source: US Food and Drug Administration (FDA), European Medicines Agency (EMA), and Health Canada databases. IQVIA MIDAS® Database, prescription retail and hospital markets, 2018. All rights reserved.

The prices of some biosimilars are markedly higher in Canada

Despite offering comparable discounts, prices of four of the five biosimilars sold in Canada were higher than in international markets in 2018. This was likely due to the variation in the prevailing originator prices.

For example, although Canada had a greater biosimilar discount for insulin glargine, the average price level in the OECD was 23% lower than the price in Canada in the last quarter of 2018.

Table 3.2 Prices and discount rates of biosimilars with sales as of Q4-2018

Note: Prices and discounts are reported as sales-weighted averages of all available forms and strengths.
* France, Germany, Italy, Sweden, Switzerland, the United Kingdom, and the United States.
† The median discounts were calculated based on the price of the biosimilar as of Q4-2018 and the originator in the quarter before biosimilar introduction.
‡ Could not be calculated due to data limitations.
Data source: IQVIA MIDAS® Database, prescription retail and hospital markets, Q4-2018. All rights reserved.

At the end of 2018, only the somatropin biosimilar had outpaced international uptake. Even after considering the time of launch, the uptake of infliximab, etanercept, and insulin glargine biosimilars in Canada lagged behind other countries.

Filgrastim, with a biosimilar uptake of 71.5%, was much closer to the international norms. This medicine, which is prescribed for acute indications, is predominantly prescribed to treatment-naïve patients, which may account for its higher uptake.

Factors that may influence biosimilar uptake in Canada

Infliximab was one of the first biologic medicines with biosimilar sales in Canada.

Although the biosimilar Inflectra was first sold in Canada in 2015, its uptake has been limited, and by the end of 2018 the originator biologic Remicade still maintained a significant market share. This analysis examines the relative use and costs of Remicade and Inflectra in Canadian public drug plans within the context of their therapeutic class of disease-modifying antirheumatic drugs (DMARDs).

This section also compares the overall Canadian experience with the policy-driven uptake of infliximab biosimilars in international markets. These policies include switching, which is a physician-driven decision to exchange one medicine for another during the course of treatment, and substitution, which is the practice of dispensing an alternate medicine at the pharmacy level without consulting the prescriber.

The uptake of Inflectra in Canada was only 8% in 2018, well below the OECD median of 46% for infliximab biosimilars.

The uptake of infliximab biosimilars in Norway, Poland, and the United Kingdom exceeded 90% in 2018, well above the OECD median.

Patients already established on treatments make up most of the biologic DMARD market.

While infliximab continued to account for 30% of the biologic DMARD patients and 45% of the drug costs for Canadian public plans in 2017/18, Inflectra only represented 1% of patients and 0.6% of costs.

Switching patients to biosimilars could result in significant savings

Patients using biologic DMARDs made up less than 1% of the eligible beneficiaries in public plans in fiscal year 2017/18, but accounted for over 10% of all drug costs.

Given the high cost of biologics in Canada, biosimilars offer the potential for important savings. Recently, Canadian payers have undertaken a number of initiatives to increase biosimilar uptake, which are outlined in the table below.

The second part in the Biologics in Canada chartbook series will explore the potential for increased biosimilar savings in more detail.