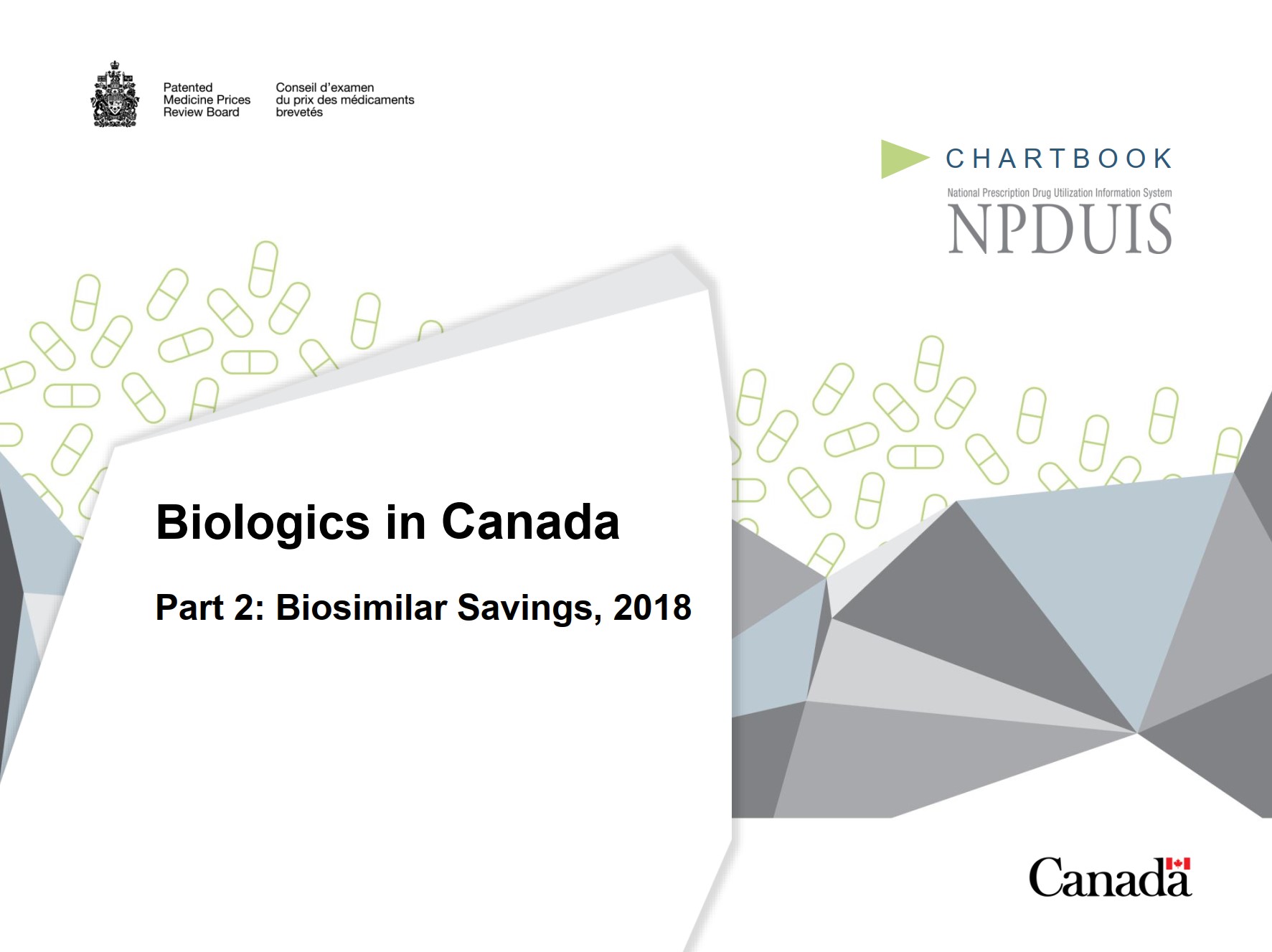 Biologics are a high-growth market segment. In Canada, sales of biologic medicines have tripled over the last decade, reaching $7.7 billion in 2018 and accounting for almost one third of all pharmaceutical sales.

While biosimilars of infliximab, etanercept, insulin glargine, and filgrastim saved Canadians an estimated $93.9 million in drug costs in 2018, the savings could have been many times greater if domestic uptake and pricing had been more closely aligned with median OECD levels.

Drawing on current trends in domestic and international biosimilar pricing and uptake, this analysis estimates the additional savings that could be achieved by increasing the uptake and/or lowering the prices of biosimilars in Canada.

This is the second publication in a two-part chartbook series. The first part in the series, Biosimilars in Canada. Part 1: Market Trends, 2018, examines the market dynamics of biologics in Canada and compares Canadian and international trends in biologic sales and pricing, as well as biosimilar uptake.

Biologics are a class of medicines formed from living organisms or from their cells using advanced biotechnology processes. They are typically larger and more complex than chemically produced pharmaceutical drugs. In Canada, biologic drugs are listed in Schedule D of the Food and Drugs Act.

Biosimilars are launched later in Canada than in Europe, and when they do arrive, biosimilar uptake tends to be lower. Even though the biosimilar discounts in Canada are greater than in other counties, Canadians still end up paying more, as the discounts do not offset the higher reference price of the more expensive originator biologics.

Historically, the savings from generic substitution and generic price reductions have helped to offset the cost pressures from new drugs and increased utilization for Canadian drug plans. However, in recent years, the impact from these savings has been gradually declining.

Given the high-growth market for biologics in Canada, biosimilars offer an excellent opportunity for significant cost savings; but this is a complex market space, and these potential savings have yet to be fully realized. Unlike small molecule medicines, which experience a relatively quick market adjustment after generic entry, most originator biologics in Canada continue to dominate the market long after the introduction of a biosimilar. This, in turn, limits the savings for Canadian payers and their potential ability to fund new therapies that are increasingly coming at high prices.

Despite the availability of a biosimilar alternative, the originator biologic Remicade still accounted for the vast majority of infliximab sales in 2018, a market worth over $1 billion in Canada. Since then, policy initiatives by public plans in British Columbia and Alberta, as well as by Green Shield Canada, have been introduced to promote switching to available biosimilars. Future analyses will measure the impact of these policy changes on the market in Canada.

Note: The upward push in 2015/16 and the downward pull in 2016/17 were heavily influenced by the introduction of direct-acting antiviral drugs for hepatitis C.
Values may not add to totals due to rounding and the cross effect.
Data source: National Prescription Drug Utilization Information System Database, Canadian Institute for Health Information.

This analysis explores the potential savings from a select number of biosimilars that have been launched in the Canadian market or are expected to be available by the end of 2020.

Estimated savings are based on various scenarios of market entry, uptake, and price discounts, as observed in Canadian and foreign markets. Estimates are based on an aggregate of the potential savings of select biosimilars in the third year following market entry.

Pricing and uptake information were calculated by converting the physical quantities of drugs into a standard unit of measure. This allowed for the aggregation of units across groups of drugs, which would not otherwise be possible.

International availability, uptake, and pricing information were determined based on data from the IQVIA MIDAS® Database for member countries in the Organisation for Economic Co-operation and Development (OECD).

The anticipated launch dates reported in this chartbook were based on reviews of various publicly available sources. These dates are estimates and may change at any time.

The use of biosimilars of infliximab, etanercept, insulin glargine, and filgrastim, which have been available in Canada for at least two years, saved Canadians an estimated $93.9 million in 2018. Assuming that the trend in uptake follows the status quo, in 2021, these savings will total $294 million.

Using two different scenarios based on international experience, this section demonstrates the additional savings that Canadians could realize by increasing biosimilar uptake and/or lowering prices. Results are given for the unrealized savings potential in 2018, as well as the forecast savings for 2021.

Two scenarios based on OECD biosimilar uptake and pricing are used to determine the additional potential savings for 2018 and the forecasted savings for 2021.

OECD moderate estimate: Assumes that the uptake of biosimilars in Canada matches the OECD median (indexed to launch) and biosimilar prices remain at the Canadian level.

Under this scenario, the savings potential in 2018 would have increased from an estimated $94 million to $346 million.

OECD high estimate: Assumes that the uptake of biosimilars in Canada matches the median uptake in the top four OECD countries and the Canadian price matches the OECD median price.

Under this scenario, the savings potential in 2018 would have increased from an estimated $94 million to $808 million.

Increasing the uptake and/or lowering the prices of the four biosimilars analyzed would have a significant potential impact on the savings realized by Canadians.

Projecting to 2021, if moderate OECD uptake rates are applied, the estimated savings from these biosimilars could be increased by $401 million over the status quo estimate. If the high OECD estimate is applied, estimated future savings of $1,136 million could be attained, $842 million more than the Canadian estimate of $294 million.

* Assuming that the total use of each medicine remained the same and that the price of the originator biologic did not drop after the launch of the biosimilar.
Data source: IQVIA MIDAS® Database, prescription retail and hospital markets. All rights reserved.

Infliximab is over a one billion dollar market in Canada.

However, if the biosimilar uptake was increased to the median OECD level for the 2019 to 2021 period, these forecasted savings could more than triple. Using higher uptake values and median OECD prices would increase the estimated savings even further to well over $2 billion, more than five-fold the anticipated level using the current Canadian trends.

This section illustrates the potential savings from the use of infliximab biosimilars from 2015 to 2021 under three different scenarios: current Canadian trends; the OECD moderate estimate; and the OECD high estimate.

If the current trend in biosimilar uptake continues, biosimilar sales are forecast to reach $457 million from 2019 to 2021. This would result in an estimated $447 million in savings over that period.

If the uptake in infliximab biosimilars in Canada matched the median OECD level, savings could potentially increase by almost $1 billion over 3 years

For the 2019 to 2021 period, increased biosimilar uptake would result in forecasted biosimilar sales of $1,644 million. This would give rise to an estimated $1,412 million in savings, $965 million more than in the Canadian uptake scenario.

With a higher uptake in infliximab biosimilars and Canadian prices matching the OCED median level, anticipated savings could potentially increase by more than $1.8 billion over 3 years

With many new biosimilars entering the market, there is a potential for significant future savings.

This section forecasts the potential savings for six biologic medicines with biosimilars that recently entered the Canadian market or that are expected to be available in Canada by the end of 2020: ranibizumab, rituximab, trastuzumab, bevacizumab, insulin lispro, and pegfilgrastim.

Their potential uptake, price, and resulting savings are estimated based on the experience of similar biosimilars in Canadian and international markets.

Three scenarios are used to calculate the potential savings from these biosimilars in 2023.

Canadian estimate: Assumes that the Canadian price of the originator biologic is discounted by the average Canadian biosimilar discount (30.05%), unless it has a publicly available price.

OECD moderate estimate: Assumes that the OECD median uptake is combined with the Canadian prices used in the first scenario.

Canadian and OECD uptake is modelled after the uptake of similar biologic medicines currently available in the related market. Biosimilar uptake is measured for the first three years after introduction indexed to the year of launch. Total medicine use was projected based on the Canadian use of the originator biologic.

Five of the biosimilars analyzed have indications for acute diseases or cancer. Their potential rate of uptake in Canada is modelled after the indexed uptake of the filgrastim biosimilar, which has a higher Canadian market share than median OECD share in the third year after launch. The new insulin medicine is expected to follow a similar trend as insulin glargine.

In 2023, the total savings from these new biosimilar medicines in Canada could vary from $222 million to $447 million depending on their rate of uptake and price discount.