The Access to Information Act (the Act) gives the Canadian public a right to access information contained in federal government records, subject to certain specific and limited exceptions.

The Act requires the head of every federal government institution to submit an annual report to Parliament on the administration of the Act following the close of each fiscal year. This annual report is prepared and is being tabled before each House of Parliament in accordance with section 72 of the Access to Information Act. This report provides a summary of how the Public Health Agency of Canada (PHAC) has fulfilled its access to information responsibilities during the fiscal year 2016-2017.

II. About the Public Health Agency of Canada

PHAC's mission is to promote and protect the health of Canadians through leadership, partnership, innovation and action in public health.

The role of PHAC is to:

For more information about PHAC, please visit our web site at: http://www.phac-aspc.gc.ca/index-eng.php

The Access to Information and Privacy (ATIP) Division is housed in the Planning, Integration and Management Services Directorate, Corporate Services Branch at Health Canada (HC).

The ATIP Coordinator is accountable for the development, coordination and implementation of effective policies, guidelines, systems and procedures in order to enable efficient processing of requests under the Act. The Coordinator is also responsible for the implementation of relevant government-wide policies, systems and procedures. The Division is responsible for all Access to Information (ATI) legislative requirements pursuant to the Act such as:

PHAC has a reading room available where members of the public may make arrangements to review materials, as required in section 71 of the Act. The public reading room is available at:

The most recent delegation order for the Access to Information Act was signed by the Minister of Health on November 25, 2015. In keeping with Treasury Board Secretariat recommendations on best practice, the delegation order extends authorities to multiple positions including the Coordinator, the Corporate Services Branch's Assistant Deputy Minister and Director General of Planning Integration and Management Services Directorate. As appropriate, certain administrative authorities are delegated to various senior levels within the ATIP Division to support the effective and efficient administration of the Act. HC, within the shared services partnership agreement, provides ATIP services to PHAC under this delegation of authority.

The Delegation Order is attached as Appendix A.

Requests under the Access to Information Act - Statistical Figures, Interpretation and Explanation

This section of the report includes an interpretation and explanation of the data contained in PHAC's statistical report which summarizes ATI-related activity for the period between April 1, 2016 and March 31, 2017 (Appendix B).

Requests can be made for records previously released under the Act, these are referred to as 'Access Informal'. In 2016-2017, PHAC processed 22 informal requests, compared to 16 requests in 2015-2016. This represents a 38% increase and continues the upward trend from 2014-2015 where there were 13 informal requests. As part of the Government's commitments to Openness and Transparency, the Treasury Board Secretariat released the Interim Directive on the Administration of the Access to Information Act in May 2016 prescribing a consistent approach for departments to post summaries of requests completed on a monthly basis. This initiative enables requesters to review requests that have been released and request information already disclosed, helping to offset the number of new requests that would be received by the Agency. This also supports greater efficiency of operations by avoiding the need to re-process the same records and more timely access of the records for requesters. Note that the summaries would not include release packages containing personal or proprietary information

Fiscal year 2016-2017 continued with the approach adopted in 2015-2016 to streamline the processing of requests by ensuring only records that fell within the scope of the request were reviewed. This attention to precision in reviewing the records, along with increased education and awareness of employees at PHAC, enabled PHAC to be more strategic in the retrieval and review of records in response to requests.

Consultations Completed for Other Institutions

Completed requests were classified as follows: 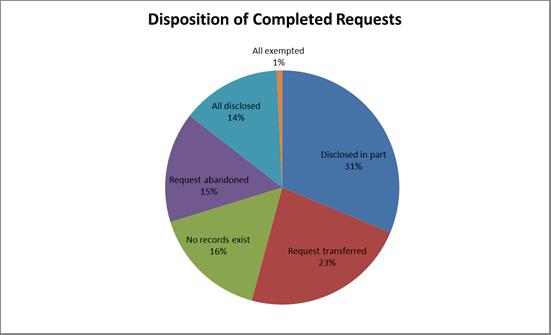 Sections 13 through 24 of the Act set out the exemptions intended to protect information pertaining to a particular public or private interest, and section 26 of the Act is a temporary exception relating to information to be published.

The majority of the 143 exemptions invoked by PHAC focussed on four sections of the Act - section 13 (information obtained in confidence), section 19 (personal information), section 20 (third party information), and section 21 (operations of government). Together, these accounted for 104 (73%) of the exemptions applied in 2016-2017.

The Access to Information Act does not apply to published material, material available to the public for purchase or for public reference (section 68); nor does it apply to confidences of the Queen's Privy Council (section 69). Requests containing proposed exclusions under section 69 require consultation with the Department of Justice, and potentially the Privy Council Office.

During 2016-2017, PHAC applied one exclusion pursuant to section 68 of the Act, and four exclusions for section 69 of the Act.

The number of completed requests within 30 days was 88 (67%) representing a 17% increase from the previous year. The remaining requests, categorized into time segments of 31 to 60 days, 61 to 120 days, and 121 days or more, are depicted in the table below. It is important to note that many of the files processed were large in size and required consultations, necessitating extensions to complete all required actions. The table below represents completion time, but does not factor in extensions appropriately taken under the Act.

Legal extensions were most frequently invoked to provide time to complete third party consultations and notifications, and to process voluminous records. Of the 131 files closed in 2016-2017, PHAC invoked 55 extensions under section 9(1) of the Act, an increase from the 50 invoked in 2015-2016.

No translation was required to respond to requests in 2016-2017.

Of requests that were fully or partially disclosed, 23 were released in paper format, while the remaining 36 were released as electronic copies.

The Act authorizes fees for certain aspects of processing formal requests and the fee structure is prescribed in the ATI Regulations. However, TBS in May 2016 issued the Interim Directive on the Administration of the Access to Information Act which imposed a requirement to waive all fees chargeable other than the $5 application fee, regardless of the size and scope of the request or burden on the Department to process.

Based on requests completed in 2016-2017, PHAC collected $480 in application fees submitted to the Receiver General for Canada. In addition, PHAC waived $380 in fees.

Training sessions regarding the Act and related processes are offered to PHAC employees on a regular basis.  In fiscal year 2016-2017, the ATIP Division delivered 4 "ATI 101" training sessions to 13 participants.  The objectives of the sessions are to impart an understanding of the Act, roles and responsibilities, the handling of formal and informal requests, basic grounds to withhold information and how to process an ATI request. Significant efforts have been put into updating training materials and tools.

To enhance the effectiveness of the training sessions, a new process to identify and strategically assess training needs and to provide customized training to the target groups has been implemented. In addition, the ATIP Division worked in collaboration with various program areas to promote awareness.

Complaints and Court Applications for Reviews

I. Complaints to the Information Commissioner

During 2016-2017, PHAC was notified of 6 complaints under the Act that were filed with the Office of the Information Commissioner of Canada (OIC).

The Agency reviews the outcomes of all OIC investigations, and where appropriate, incorporates lessons learned into business processes.

II. Types of Complaints and their Disposition Completed in 2016-2017

IV. Responses to Recommendations raised by other Agents of Parliament

There were no recommendations raised by other Agents of Parliament during fiscal year 2016-2017.

During 2016-2017, ATIP Division continued its efforts to formalize and document its internal operating procedures. Several procedures internal to the ATIP Division were created or modified to help support efforts of ensuring accountability, clarity and consistency.

In 2016-17, ATIP Division implemented an ATI Action Plan to bring sustainable improvements in satisfying requirements under the Access to Information Act. The Action Plan implements a variety of initiatives along three themes of accountability, demand management, and ATIP operations.

Successes stemming from the first year of the Action Plan implementation included the transition to a modernized case management and imaging software solution, enhanced performance reporting, piloting of a two-step tasking process to improve the clarity and scope of requests earlier in the process, and implementing ATIP operations policies and procedures to improve operational consistency and efficiency. To support these initiatives, training and engagement were strengthened, both within the Agency and ATIP Division. Working groups were created or re-introduced with participants from branches within PHAC with a focus on identifying and leveraging best practices, and improving collaboration and information sharing.

Most significantly, the Action Plan secured additional ongoing funding for the ATIP Division to support hiring of several new employees. Recruitment efforts have proceeded well despite a shortage of specialized resources across the Government of Canada. This supports PHAC's efforts to meet legislative requirements under the Act and respond to a large and growing volume of requests. In January 2017, the ATIP Professional Developmental Program was implemented to accelerate the development of specialized resources and aims to further increase operational capacity within the ATIP Division.

Summary of Key Issues and Actions Taken on Complaints or Audits

The Public Health Agency of Canada was one of six original departments to participate in the OIC's pilot project on the investigation of complaints concerning delays (deemed refusals) and extensions. This pilot project streamlined administrative processes involved in the investigation of these complaints with the goal of quicker resolution for both the complainant and the institution. As results were positive, this process was rolled out across Government.

ATIP Division has undertaken the production of weekly, monthly and quarterly reporting to Senior Management in order to monitor performance within PHAC.

I, the Minister of Health, pursuant to section 73 of the Access to Information Act and section 73 of the Privacy Act, hereby designate the persons holding the positions set out in the Delegation of Authority Schedule attached hereto, or the persons occupying on an acting basis those positions, to exercise the powers, duties and functions of the Minister as the head of the Public Health Agency of Canada, under the provisions of the Act and related regulations set out in the schedule opposite each position. This designation supersedes all previous delegation orders.

Appendix B: Statistical Report on the Access to Information Act