For readers interested in the full version of this report, the document is available for downloading or viewing: 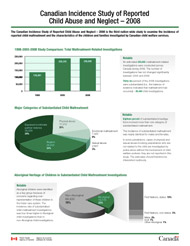 The Canadian Incidence Study of Reported Child Abuse and Neglect - 2008 is the third nation-wide study to examine the incidence of reported child maltreatment and the characteristics of the children and families investigated by Canadian child welfare services.

Notable
An estimated 235,842 maltreatment-related investigations were conducted across Canada during 2008. The number of investigations has not changed significantly between 2003 and 2008.

Thirty-six percent of the 2008 investigations were substantiated (i.e., the balance of evidence indicated that maltreatment had occurred) - 85,440 child investigations.

The incidence of substantiated maltreatment was nearly identical for males and females.

In some jurisdictions, cases of physical and sexual abuse involving perpetrators who are not related to the child are investigated by police alone without the involvement of child welfare workers; they are not reported in this study. The estimates should therefore be interpreted cautiously.

For Further Information: Visit www.phac-aspc.gc.ca/cm-vee/public-eng.php or call the Injury and Child Maltreatment Section at (613) 957-4689.