When Children Act Out Sexually: A Guide for Parents and Teachers

When Children Act Out Sexually 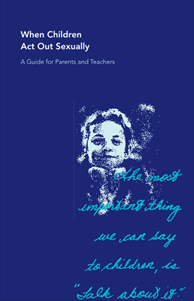 This booklet answers these questions:

Why is it hard to recognize the problem?

There are few problems as difficult for parents, teachers, and day-care staff as deciding how to deal with children in their care who are imposing sexual behaviour on other children. There are many questions to consider. Should you simply ignore the behaviour and hope the child will 'grow out of it'? Or should you attempt to correct the behaviour, and run the risk of making the child feel guilty about normal sexual curiosity?

The most important thing we can say to children is "talk about it."

How do you deal with your own discomfort in addressing the problem? Many adults in charge of young children come from homes where sex was never discussed. There is a substantial emphasis on sex in today's society, so we may assume that our children are sexually sophisticated. We may risk viewing children's sexual behaviour and language as a sign of the times and do nothing about it or we may envy their 'openness', and compare it unfavourably with our own 'repressed' childhoods.

Children today do have access to more information about sex but it is also true that they are exposed to more misinformation.

They also experience a lot of sexual pressure from the media and from society as a whole. To help children in trouble, we must base our decisions on what we know as fact and not on what we imagine to be true.

All children are different and develop at different rates.

To know whether a child is being sexually aggressive or simply curious, we need to understand children's normal sexual development. There is a world of difference, for example, between two children in a daycare pulling their pants down to look at one another's genitals and a child forcing an object into another child's anus.

What is normal sexual development?

The most important thing we can say to children, is "Talk about it."

Don't be alarmed if children appear to skip some of these stages. All children are different and they all develop at different rates. The stages listed here are generally true, and are simply intended as a guideline to help you make an initial judgment about whether a specific child's sexual behaviour is considered age-appropriate.

How is normal sexual development disrupted?

It can be disrupted by the unwanted and forceful sexual attention of adults, older children or aggressive children their own age.

Forceful sexual attention may take several forms, such as:

Are there signs a child may have been abused?

Yes. When children have been sexually abused or subjected to unwanted sexual attention, they may change their behaviour in a number of ways:

Why do abused children act out sexually?

Although there is evidence that sexually abused children can act out against other children, the reason they do so isn't always clear. People often assume that abused children would try to avoid repeating a frightening and distasteful activity. However, in many cases, children who have been sexually abused repeat the experience with other children in an effort to make sense of what happened to them and to regain a sense of control. For example, a boy may have been forced to perform oral sex on an older boy. The activity may have made him feel frightened, confused and sexually excited all at the same time. Repeating the activity with a younger child takes him out of the confused and helpless role and into a new and more powerful role. He is now less frightened and less anxious, and better understands why the older boy wanted oral sex performed on him.

Boys are often ashamed to say they have been victims, so acting out sexually may be a way of calling out for help. Sometimes boys will admit that they have done something sexual to another child before they will disclose being victims themselves.

"I'm glad he told because he seemed really unhappy and we couldn't figure out why. Now that we know we can help him."

Sexual acting out is only one of the ways in which children try to adapt to being abused. As a general rule, the more supported children feel after disclosing sexual abuse, the less likely they are to act out sexually. When we don't allow children, boys in particular, to admit to feeling powerless or helpless, we often create situations in which the only feelings allowed are anger and aggression.

How should you respond to children who act out sexually with other children?

Children who act out sexually should always be viewed with compassion. If their behaviour is upsetting to us, we may recoil and scapegoat them by calling them 'offenders' or 'abusers'. These children need help just as much as their victims and you should explore ways to offer support and intervention. This may mean reporting them to the police and/or a child protection authority.

Sometimes, when children are questioned, they will share that they themselves have been sexually abused by a teenager or an adult. Social service workers must protect children who act out sexually as well as their victims.

If children who abuse other children are 12 years or older, they may be charged under the Youth Criminal Justice Act . The judge will take into account their age. Charging young offenders holds them accountable for their actions and may provide them with access to the specialized counselling they require. The judge will often rely on the experience and testimony of social workers, police and others to distinguish between children who have just started to abuse and older teenagers who have a more severe problem.

Why is it important for adults to intervene when children act out sexually?

Children who act out sexually and are not stopped hurt other children and themselves. Because they relate to other children in a sexual way, they are deprived of a chance to have real friendships. When children have a guilty secret, it is hard for them to be open with others and this affects their social relationships.

A sense of power over others plus sexual excitement can be extremely rewarding, particularly since it compensates for poor self-esteem. The longer the sexual activities continue, the more difficult they are to stop.

Children who act out sexually should always be viewed with compassion.

A child may abuse a child who then begins to abuse other children. There may then be a ripple effect, with the children initiating still more children into sexual activity. This may happen in a school or neighborhood and it is another reason for adults to intervene when children act out sexually.

Sexual abuse of any kind thrives on secrecy; breaking secrecy is the first step towards helping everyone involved. Children who abuse must be interviewed by social services or police for two reasons: to help them admit to what they have done, and to provide insights as to why they are doing it. Once they admit to abusing, they are much less likely to continue. As long as they deny what they are doing, and deny their own probable victimization, they are much more likely to continue acting out in this way.

How can we support a child who has acted out sexually?

As a parent, you can help in several different ways:

Schools can help by using sexual abuse prevention programs. School programs have already encouraged many children to disclose incidents of sexual abuse. Teachers presenting these programs should point out that it isn't just strangers in cars who sexually abuse children. It may be family members and it may even be other children.

Don't overreact and don't underreact, try to get all the facts of what happened and provide support to your child.

Police can help by warning children of the consequences of their activities if they are carried into adolescence or adulthood.

Counsellors can help children understand the causes of their behaviour, and learn how to control it. It is important that the offending behaviour be addressed and controlled before dealing with previous victimization that may have occurred.

How can parents deal with their own feelings?

Finding out that your own child has sexually abused another child may be one of the most difficult life experiences you'll ever have to face. Most parents go into shock initially, then through a period of denial where they try to pretend that nothing has happened. For a while they might feel as though they're on a roller-coaster ride of unfamiliar and conflicting emotions.

Here are some common reactions:

Breaking secrecy is the first step towards helping everyone involved.

If you're a parent whose child has abused another child, it's normal to go through all of these reactions, often within a short span of time. Your child's counsellor or a counsellor of your own can help. The crisis may also trigger memories of sexual abuse incidents from your own childhood which perhaps you've tried to forget.

What will your child's counsellor do?

Usually your child's counsellor will have specialized training in child sexual abuse with a good knowledge of both victim and abuser treatment.

The counsellor will help you and your child do three important things:

With your help, the crisis can become an opportunity for change and growth.

The more that that counsellors can help children talk about their behaviour, the more likely they are to stop.

Children develop sexually at their own rate and in their own way provided their development is not disrupted. Both parents and teachers have a critical role to play in identifying and helping children who are sexually abusing other children. Your worst fear may be that the child will grow up to be an adult sexual offender. It doesn't have to turn out that way. The more that counsellors can help children to manage their behaviour and express their feelings, the more likely they are to stop.

For information on internet safety go to
www.CyberTip.ca and www.safecanada.ca

Additional resources are available at your community resource centre, your local library or the Stop Family Violence.