WHO Facts on Alcohol and Violence: Child maltreatment and alcohol

WHO Facts on Alcohol and Violence: Child maltreatment and alcohol 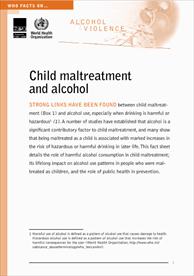 STRONG LINKS HAVE BEEN FOUND between child maltreatment (Box 1) and alcohol use, especially when drinking is harmful or hazardousFootnote 1 (1). A number of studies have established that alcohol is a significant contributory factor to child maltreatment, and many show that being maltreated as a child is associated with marked increases in the risk of hazardous or harmful drinking in later life. This fact sheet details the role of harmful alcohol consumption in child maltreatment; its lifelong impact on alcohol use patterns in people who were maltreated as children, and the role of public health in prevention.

Links between alcohol use and child maltreatment

Child maltreatment can be defined as all forms of physical and/or emotional ill-treatment, sexual abuse, neglect, negligent treatment, commercial or other exploitation, resulting in actual or potential harm to the child's health, survival or development or dignity in the context of a relationship or responsibility, trust or power (2). Globally, an estimated 57,000 deaths were attributed to homicide among children less than 15 years of age in 2000, with rates highest amongst infants and very young children (0−4 years) (3). Reported levels of non-fatal abuse are much higher. In the United States of America, approximately 906,000 children were found to have been victims of maltreatment in 2003 (4). A comparative study of child maltreatment in Chile, Egypt, India and the Philippines, showed that the percentage of mothers admitting to hitting their child with an object (on a part of the body other than the buttocks) ranged from 4% in Chile to 36% in India (5). Accurate estimates of non-fatal maltreatment are difficult to determine and cultural differences in parenting styles and definitions of child maltreatment further confound estimates. Moreover, many countries have no systems in place to record reports of child maltreatment, and even in countries with such systems many incidents of abuse remain unreported to authorities.

Studies in many countries report associations between harmful alcohol consumption and perpetration of child maltreatment (e.g. South Africa [19], Colombia [20]; Latvia, Lithuania, Moldova, The Former Yugoslav Republic of Macedonia [21]; the United States [22]; the United Kingdom [23]). However, studies that quantify the involvement of alcohol use in the perpetration of child maltreatment are rare and have been conducted almost exclusively in high-income countries. Where figures are available, methodological differences between countries complicate comparisons, which are further confounded by substantial under-reporting of child maltreatment to both health and judicial systems. However, findings include:

Other measures of association derive from reports of harmful parental alcohol use in child welfare investigations. Such studies do not usually report whether alcohol was used immediately prior to child maltreatment but establish heavy alcohol use as a parental characteristic. For example:

A wide range of risk factors have been identified that increase a child's risk of being maltreated. These include: having young, poor, unemployed or socially isolated parents; having a history of domestic violence in the home; living in a single parent family and living in an overcrowded household (3). Specifically for alcohol, having a parent with a history of harmful or hazardous alcohol use has consistently been found to increase the risk of child maltreatment (30-32). Further, when both parents experience problems with alcohol, the risk of maltreatment is even greater (30).

Adolescents with low parental involvement, or who report physical or sexual abuse, are more likely to be influenced by social pressures to drink alcohol and are at greater risk of regular drinking (33,34). Such frequent drinking by adolescents is linked to problems such as truancy, poor school performance and delinquent behaviour (35,36), which can further increase the risk of physical abuse by a parent (37). Past experiences of child maltreatment may also contribute to perpetration, with children who experience maltreatment being more likely to drink heavily as adults, and having higher potential for physically abusing their own children in later life (38,39).

The impact of physical child abuse include injuries such as bruises, burns and fractures, and stress-related symptoms such as sleep disorders (3). In severe cases, the injuries sustained from child maltreatment can be fatal (see Box 1). While levels of psychological distress have been found to differ between cultures (41), problems such as fear, depression, and attempted suicide are often reported among victims both in childhood and later in life (42-44). Such problems can increase the risk of substance misuse (34), with child abuse victims more likely to have greater use of alcohol and tobacco as an adult (12,45-47). Globally, a history of child sexual abuse is estimated to cause 4−5% of alcohol misuse in men and 7−8% in women (48). Victims are also at greater risk of displaying violent tendencies themselves later in life (e.g. child maltreatment, intimate partner violence) (39,46,49,50). Thus, child maltreatment, and subsequent alcohol problems, can contribute to cycles of violence passing from one generation to another. A child's education can also be affected, with maltreated children having poorer school attendance and progression, often resulting in lower than average income levels as an adult (51). Furthermore, some studies have found that men and women exposed to maltreatment as children are at increased risk of marrying a partner with alcohol problems or of having marital and family problems (42). From an economic perspective, the costs of child maltreatment can be substantial (see Box 2), increasing pressure on judicial, health and social services. However, the costs of maltreatment specifically related to alcohol remain largely unmeasured.

For preventing child maltreatment in general, the effectiveness of a range of strategies including family support and parenting training, screening for child maltreatment, services for victims, and community based educational programmes has already been established (see Krug et al., 2002 [3] for a review). In many cases, such approaches help reduce levels of maltreatment regardless of whether alcohol plays a role. However, strong links between child maltreatment and harmful alcohol consumption offer further opportunities to reduce maltreatment through lowering levels of drinking in the population. Studies evaluating the effects of alco-hol-related interventions on levels of child maltreatment are rare and largely limited to high-income countries. They include:

In low- to middle-income countries, efforts to strengthen and expand the licencing of liquor outlets could be of great value in reducing alcohol-related child maltreatment. However, where home production is common such measures can encourage drinkers to switch to cheaper home produced alternatives (59). Challenges to preventing child maltreatment also include cultural and individual pressures to keep maltreatment hidden. Legal requirements to record such incidents are far from ubiquitous, and families and other community members may be reluctant to seek professional help for fear of family disruption and disgrace or retaliation (60,61). Identification of alcohol-related child maltreatment and consequent facilitation of interventions can be improved through:

The role of public health

Public health has established roles in the prevention of child maltreatment in general (3). In addressing links between harmful alcohol consumption and such maltreatment responsibilities include:

Both the harmful and hazardous use of alcohol and child maltreatment have been recognized internationally as key public health issues requiring urgent attention. At both national and international levels, health organizations have a key role in advocating for policies that address the relationships between alcohol use and child maltreatment and in doing so promote prevention initiatives that will improve public health. The World Health Organization (WHO) runs comprehensive programmes on both issues to instigate and conduct research, identify effective prevention measures, and promote action by Member States to implement successful interventions and align policy towards reducing hazardous and harmful drinking and child maltreatment.

For alcohol, this includes collating and disseminating scientific information on alcohol consumption, developing global and regional research and policy initiatives on alcohol, supporting countries in increasing national capacity for monitoring alcohol consumption and related harm, and promoting prevention, early identification and management of alcohol use disorders in primary health care (64). A World Health Assembly resolution on Public health problems caused by harmful use of alcohol (WHA58.26 [65]) of 2005 recognizes the health and social consequences associated with harmful alcohol use and requests Member States to develop, implement and evaluate effective strategies for reducing such harms, while calling on WHO to provide support to Member States in monitoring alcohol-related harm, implementing and evaluating effective strategies and programmes, and to reinforce the scientific evidence on effectiveness of policies.

For violence, this includes the WHO Global Campaign for Violence Prevention. Launched in 2002, the Campaign aims to raise international awareness about the problem of violence (including child maltreatment), highlight the role of public health in its prevention, and increase violence prevention activities globally, regionally and nationally. The approach to preventing violence is set out in the WHO World report on violence and health (1). World Health Assembly resolution WHA56.24 (66) of 2003 encourages Member States to implement the recommendations set out in the report, and calls on the Secretariat to cooperate with Member States in establishing science-based public health policies and programmes for the implementation of measures to prevent violence and to mitigate its consequences. Complementary to this, the Violence Prevention Alliance has been established to provide a forum for the exchange of best practice information between governments and other agencies working to reduce violence around the world.

International policy on child maltreatment includes the Convention on the Rights of the Child, adopted by the United Nations General Assembly in November 1989, which urges parties to take appropriate legislative, administrative, social and educational measures to protect children from all forms of physical or mental violence. The United Nation's Secretary General's Study on Violence Against Children, due for publication in October 2006, will address the need for prevention efforts and victim services to include strategies that target the relationships between child maltreatment and harmful alcohol use. Additionally, UNICEF, the United Nations Children's Fund, supports countries in implementing such measures, working at an international level to create protective environments for children that are free from violence, and recognizing the role that alcohol misuse can play in child maltreatment.

Those that sell alcohol but do not allow consumption within the premises (e.g. grocery or convenience stores).