The Canadian Hospitals Injury Reporting and Prevention Program (CHIRPP) is an injury and poisoning surveillance system that collects and analyzes data on injuries to people who are seen at the emergency rooms of 11 pediatric hospitals (and one children's outpatient clinic within a general hospital) and 9 general hospitals in Canada. The CHIRPP has unique, richly detailed data of "pre-event" injury information obtained by asking:

Data collection began in April 1990 at the participating pediatric hospitals and between 1991 and 1995 in most of the participating general hospitals. Since then, more than 3.2 million records have been collected nationally; more than 80% of these records concern children and youth 19 years of age and younger. Records from the general hospitals also provide information on injuries sustained by adults. The CHIRPP database provides information for summary reports on injury occurrence and may also be used for more detailed research. Analysts can zero in on a specific set of records by "searching" the database for selected variables, key text words, or a combination of these. These efforts help contribute to the CHIRPP's ultimate goal: to reduce the number and severity of injuries in Canada.

The CHIRPP is a program of the Public Health Agency of Canada. 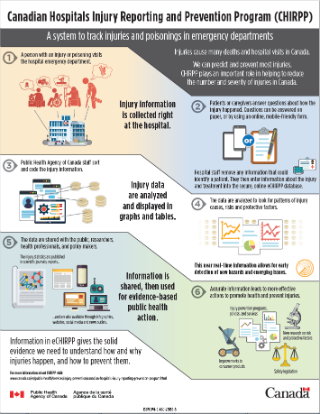 When an injured person presents to the emergency room of a participating hospital, he/she (or the caregiver accompanying a child) is asked to complete a one-page questionnaire ("CHIRPP form"). Questions on the front side of the form concern the circumstances surrounding the injury:

Staff in the emergency department fill out the other side of the CHIRPP form, providing details on the nature of the injury, injured body part and treatment received.

At each hospital there are 2 people who administer the program:

Trained staff also code the injury information from a written account of "what happened" provided by the patient or caregiver on the form. The CHIRPP infographic has more information about the program's purpose and activities.

The CHIRPP's information is provided to interested parties, such as injury prevention workers, researchers, healthcare providers, and public health practitioners who are striving to reduce injuries and make Canada safer. They use the data to set priorities, and to develop and evaluate injury prevention strategies. CHIRPP data are used to increase awareness and provide information for parents and caregivers, to better understand risks and hazards, to help tailor prevention programs, to focus efforts on hazardous situations or people who are at high risk of injury, and to help governments develop policy and legislation that improves safety.

Over the years, CHIRPP data have been used to study subjects such as injuries sustained during various sports and leisure activities, burns and scalds, poisonings, and injuries occurring at particular locations such as daycare centres and the home. CHIRPP analysts also provide brief reports in response to specific requests from members of the injury prevention community, governments, hospitals, health units, sports associations, teachers, daycare workers, the media and individuals. The CHIRPP centre at each participating hospital maintains a copy of its own local database, and these data are often used for research and information dissemination within the hospital and community. Read more about the many national CHIRPP information products that have been produced over the years.

A partner in the injury prevention community

Injuries are the most significant threat to the health of Canadian children and a leading cause of death and disability for people of all ages. Canadians are increasingly aware of the magnitude of this problem and this has led to greater interest in injury prevention. Concerned groups and individuals have been working together to formulate new and creative ways of reducing injuries. Those involved in promoting safe environments and behaviours have formed partnerships and networks and regularly share data and strategies. The CHIRPP is part of this growing partnership - an invaluable resource for those who need to know how, why, and to whom injuries are happening. By providing such information, CHIRPP is fulfilling its aim: to contribute to the reduction in the number and severity of injuries in Canada.

CHIRPP information products are based on information from the CHIRPP database. It is important to note that the injuries described do not represent all injuries in Canada, but only those seen at the emergency departments of the 20 hospitals in the CHIRPP network. Since the bulk of CHIRPP data come from hospitals in cities, and most are pediatric hospitals, injuries sustained among the following people are underrepresented in the CHIRPP database: older teenagers and adults who are seen at general hospitals; First Nations, Inuit, Métis and other people who live in rural and remote areas. Fatal injuries are also underrepresented in the CHIRPP database because the emergency department data do not capture information about people who died before they could be taken to hospital or those who died after being admitted to hospital.

CHIRPP information products and statistics from them may be copied and circulated freely provided that the source is acknowledged. Unless otherwise stated, the following citation is recommended:

Injury statistics were obtained from the database of the Canadian Hospitals Injury Reporting and Prevention Program (CHIRPP), Public Health Agency of Canada.