Why you should take note

Since the beginning of the year, there has been a higher than usual number of cases of measles in Canada.

Cases have been reported , in five Canadian provinces: British Columbia, Alberta, Saskatchewan, Manitoba and Ontario. Measles is relatively rare in Canada thanks to high immunization rates across the country. However, Canada will continue to see measles cases related to travel to countries where measles is endemic or there are large outbreaks, such as the Philippines and the Netherlands. Measles is a very contagious disease and can be very serious, commonly causing diarrhea and pneumonia, and in rarer cases encephalitis and death. It spreads easily through close contact with an infected person.

Measles affects all age groups and can be prevented by a vaccine. Canada has a rigorous scientific review process in place to ensure vaccines are safe and effective in preventing the disease they target. More information on measles is available on our web site.

If you have received two doses of measles-containing vaccine, or if you have been infected with the measles virus before, then you are at very low risk of catching the disease.

If you have not been vaccinated and have never had the illness, then you are at risk of infection if you come in contact with someone carrying the virus.

A person can also be susceptible if they have a weakened immune system due to an underlying medical condition. Children who are less than one year of age are also susceptible to more severe disease. Immunization of others also helps to protect these vulnerable populations.

How to avoid getting measles

The best protection against measles is vaccination with two doses of measles-containing vaccine.

The Public Health Agency of Canada reminds Canadians, especially travellers, to make sure their measles vaccinations are up to date. The first dosage of measles-containing vaccine is typically administered at 12 months of age. Measles vaccine can be given to children as early as six months of age if they are travelling to countries where measles is widely circulating or live in a community where many measles cases are occurring. If a measles vaccine is given to a child less than 12 months old, another dose should be given soon after their first birthday. For children between the ages of 6 months and 12 months who have had direct exposure to a measles case, the preventative use of immunoglobulin within six days is recommended.

If you have recently travelled and you develop symptoms similar to measles when you return to Canada, you should see a health care provider. Describe your symptoms over the phone before your appointment, so that they can arrange to see you without exposing others to measles. 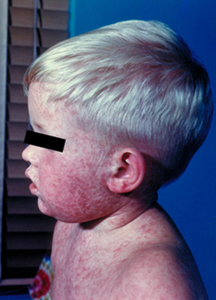 Measles is a highly infectious
disease characterized by a red,
blotchy rash that begins on the face

Symptoms include the following:

There is no specific treatment for measles. Symptoms are usually treated with medication to reduce fever and fluids. Most people fully recover.

The Public Health Agency of Canada is not advising any travel restrictions related to measles at this time, however a Travel Health Notice has been posted to provide recommendations to Canadian travellers, including information on countries where measles is occurring.

Measles occurs throughout the world and remains a serious and common disease in developing countries. It is one of the leading causes of vaccine-preventable deaths in children worldwide.

What the Public Health Agency of Canada is doing

The Public Health Agency of Canada conducts routine surveillance of measles cases in Canada and is currently working with provincial and territorial authorities to monitor measles cases in Canada. The Agency recommends that all Canadians ensure their vaccinations are up to date. Additionally, travellers should be aware of the risks and reduce the chance of getting sick while travelling by keeping all immunizations up to date.