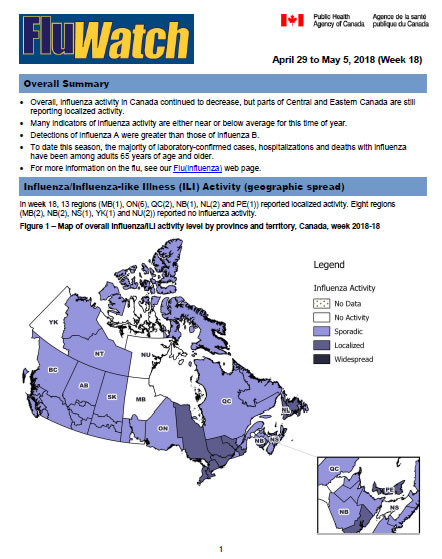 In week 18, the percentage of tests positive for influenza was 8%, a decrease from the previous week. Laboratory detections of influenza are steadily decreasing. In week 18, 367 positive influenza tests were reported, down from 526 tests reported in week 17. Influenza A accounted for 66% of influenza detections in week 18.

Overall, laboratory detections of influenza are below average for this time of year. For data on other respiratory virus detections, see the Respiratory Virus Detections in Canada Report.

To date this season, 63,853 laboratory-confirmed influenza detections have been reported, of which 56% have been influenza A. Influenza A(H3N2) has been the most common subtype detected this season, representing 90% of subtyped influenza A detections. For more detailed weekly and cumulative influenza data, see the text descriptions for Figures 2 and 3 or the Respiratory Virus Detections in Canada Report.

In week 18, 1.5% of visits to healthcare professionals were due to influenza-like illness (ILI).

To date this season, 5,059 influenza-associated hospitalizations were reported by participating provinces and territoriesFootnote 1. Among the hospitalizations, 3,373 (67%) were associated with influenza A, and 3,308 cases (65%) were in adults 65 years of age or older.

In week 18, 10 laboratory-confirmed influenza-associated pediatric (≤16 years of age) hospitalizations were reported by the Immunization Monitoring Program Active (IMPACT) network. Influenza A accounted for 80% of the hospitalizations. Pediatric hospitalizations have been on a general decline since week 07. The number of weekly reported hospitalizations are below the seven-season average.

Additionally, 183 ICU admissions and nine deaths have been reported to date. Children aged 0-23 months accounted for the greatest proportion of ICU cases (31%), followed by children aged 5-9 years (26%). Among the ICU cases with available information, 63% were due to influenza A and approximately 46% had no reported previous or concurrent medical conditions. All but one reported deaths were among children over the age of two.