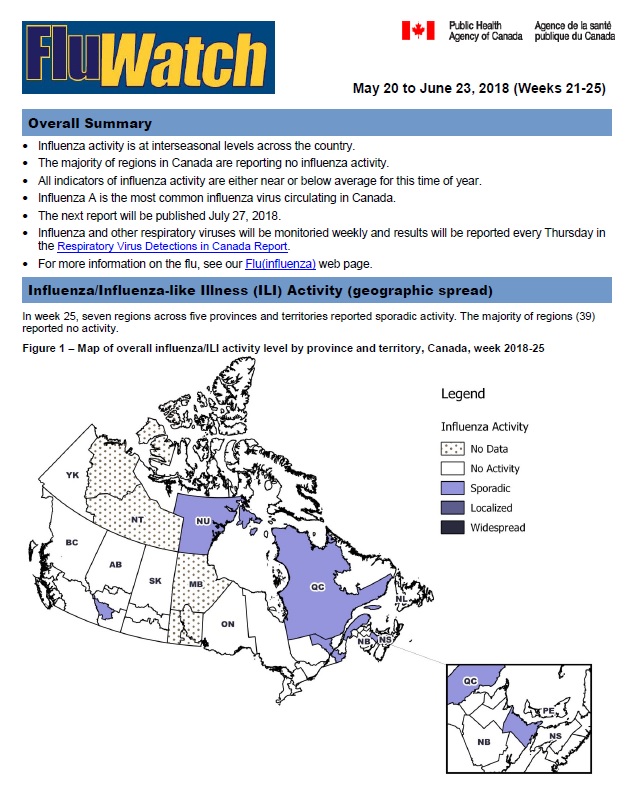 In week 25, seven regions across five provinces and territories reported sporadic activity. The majority of regions (39) reported no activity.

For data on other respiratory virus detections, see the Respiratory Virus Detections in Canada Report.

In week 25, 0.6% of visits to healthcare professionals were due to influenza-like illness (ILI).

In weeks 21-25, two influenza A outbreaks in long term care facilities were reported.

To date this season, 5,155 influenza-associated hospitalizations were reported by participating provinces and territoriesfigure 6 note 1. Among the hospitalizations, 3,433 (67%) were associated with influenza A, and 3,368 cases (65%) were in adults 65 years of age or older.

In weeks 21-25, eight laboratory-confirmed influenza-associated pediatric (≤16 years of age) hospitalizations were reported by the Immunization Monitoring Program Active (IMPACT) network. The number of weekly reported hospitalizations are below the seven-season average.

Additionally, 195 ICU admissions and nine deaths have been reported to date. Children aged 0-23 months accounted for the greatest proportion of ICU cases (31%), followed by children aged 5-9 years (25%). Among the ICU cases with available information, 63% were due to influenza A and approximately 43% had no reported previous or concurrent medical conditions. All but one reported deaths were among children over the age of two.

Among the viruses characterized antigenically as having reduced titer to ferret antisera produced against cell-propagated B/Brisbane/60/2008, sequence analysis showed that 54 viruses had a two amino acid deletion in the HA gene. Sequencing is pending for the remaining virus isolate.

FluWatch Surveillance for the 2017-2018 Season – Notes and Definitions

Greater than 10% absenteeism (or absenteeism that is higher (e.g. >5-10%) than expected level as determined by school or public health authority) which is likely due to ILI.

two or more cases of ILI within a seven-day period, including at least one laboratory-confirmed case of influenza. Residential institutions include but are not limited to long-term care facilities (LTCF) and prisons.

Workplace:
Greater than 10% absenteeism on any day which is most likely due to ILI.
Other settings:
two or more cases of ILI within a seven-day period, including at least one laboratory-confirmed case of influenza; i.e. closed communities.

Antigenic strain characterization data reflect the results of hemagglutination inhibition (HI) testing compared to the reference influenza strains recommended by WHO. Genetic strain characterization data are based on analysis of the sequence of the viral hemagglutinin (HA) gene.
Antiviral resistance testing is conducted by phenotypic and genotypic methods on influenza virus isolates submitted to the National Microbiology Laboratory. All isolates are tested for oseltamivir and zanamivir and a subset are tested for resistance to amantadine.