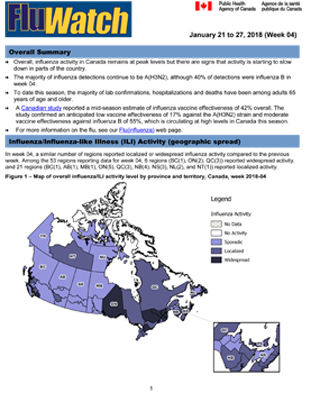 To date this season, 28,729 laboratory-confirmed influenza detections have been reported, of which 66% have been influenza A. Influenza A(H3N2) has been the most common subtype detected this season, representing 94% of subtyped influenza A detections. For more detailed weekly and cumulative influenza data, see the text descriptions for Figures 2 and 3 or the Respiratory Virus Detections in Canada Report.

In week 04, 3% of visits to healthcare professionals were due to influenza-like illness (ILI); a slight increase compared to the previous week, and slightly above the 5-year average.

In week 04, the number of laboratory-confirmed influenza-associated pediatric (≤16 years of age) hospitalizations reported by the Immunization Monitoring Program Active (IMPACT) network increased compared to the previous week. In week 04, 88 hospitaliations were reported of which influenza A and B made up almost equal proportion of cases. The number of weekly hospitalizations has been above the seven-season average since week 45.

To date this season, 446 pediatric hospitalizations have been reported by the IMPACT network, 299 (67%) of which were associated with influenza A. Children 0-23 months accounted for the largest proportion of influenza A cases (40%) and the smallest propotion of influenza B cases (22%). Among the 147 hospitalizations due to influenza B, children 5-9 years accounted for the largest proportion of cases (29%).

Additionally, 71 ICU admissions and five deaths have been reported to date. Seventy percent of ICU cases were due to influenza A. Children aged 0-23 months and 10-16 years each accounted for 31% of ICU cases.

During the 2017-18 influenza season, the National Microbiology Laboratory (NML) has characterized 874 influenza viruses [467 A(H3N2), 51 A(H1N1)pdm09 and 356 B viruses] that were received from Canadian laboratories.

Among the viruses characterized antigenically as having reduced titer to ferret antisera produced against cell-propagated B/Brisbane/60/2008, sequence analysis showed that all 10 viruses had a two amino acid deletion in the HA gene.