In weeks 51 and 52, an increasing number of regions reported localized or widespread influenza activity. Among the 45 regions for which data was available in week 52, three regions (BC(1), QC(2)) reported widespread activity, and 22 regions (BC(2), SK(2), MB (4), ON(7), QC(2), NB(2), NS(2) and PE(1)) reported localized activity. Sporadic activity was reported across most of the country. 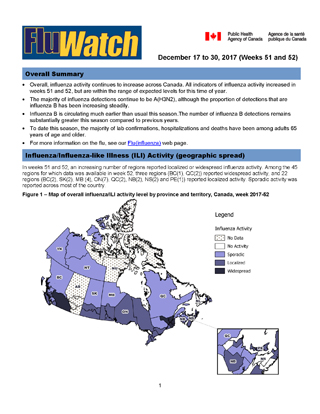 The number (1,968) and percentage (18.7%) of influenza A detections for week 52 are close to the seasonal average for this time of year. The number (994) and percentage of tests (9.4%) positive for influenza B in week 52 are well above expected levels. Influenza B is circulating much earlier than usual this season. Current levels of tests positive for influenza B are not typically seen until March. More than 15 times the number of influenza B detections have been reported this season compared to the same period during the past seven seasons. For data on other respiratory virus detections, see the Respiratory Virus Detections in Canada Report.

To date this season, 11,275 laboratory-confirmed influenza detections have been reported, of which 74% have been influenza A. Influenza A(H3N2) has been the most common subtype detected this season, representing 95% of subtyped influenza A detections. For more detailed weekly and cumulative influenza data, see the text descriptions for Figures 2 and 3 or the Respiratory Virus Detections in Canada Report.

In week 52, 4.5% of visits to healthcare professionals were due to influenza-like illness (ILI); an increase compared to the previous week. Since week 49, the weekly proportion of healthcare visits for ILI has been similar to the 5-year average.

In weeks 51 and 52, 94 influenza-associated hospitalizations were reported by participating provinces and territoriesFootnote 1. However, this is an underrepresentation of the number of hospitalizations for this period, due to gaps in reporting. Retrospective updates will be included in the next FluWatch report.

In weeks 51 and 52, the number of laboratory-confirmed influenza-associated pediatric (≤16 years of age) hospitalizations reported by the Immunization Monitoring Program Active (IMPACT) network continued to increase. A total of 84 hospitaliations were reported in this two-week period, of which 54 (64%) were due to influenza A. After several weeks above average, the number of hospitalizations reported in week 52 was similar to the seven-season weekly average.

To date this season, 195 pediatric hospitalizations have been reported by the IMPACT network, 144 (74%) of which were associated with influenza A. Thirty-five ICU admissions and fewer than five deaths have been reported. Compared to recent influenza A(H3N2) seasons at week 52, the number of hospitalizations reported this season have been greater than the 2016-17 season, but below the 2014-15 and 2012-13 seasons.

During the 2017-18 influenza season, the National Microbiology Laboratory (NML) has characterized 273 influenza viruses [190 A(H3N2), 20 A(H1N1)pdm09 and 63 B viruses] that were received from Canadian laboratories.

During the 2017-18 season, 138 A(H3N2) viruses did not grow to sufficient titers for antigenic characterization by HI assay. Therefore, genetic characterization was performed to determine to which genetic group they belong. Sequence analysis showed that 111 A(H3N2) viruses belonged to genetic group 3C.2a and 27 viruses belonged to subclade 3C.2a1.

Additionally, of the 52 influenza A(H3N2) viruses that were characterized antigenically as similar to A/Hong Kong/4801/2014, 29 belonged to genetic group 3C.2a and four viruses belonged to subclade 3C.2a1. Sequencing is pending for the remaining 19 viruses.

Among the viruses characterized antigenically as having reduced titer to ferret antisera produced against cell-propagated B/Brisbane/60/2008, sequence analysis showed that all five viruses had a two amino acids deletion in the HA gene.

During the 2017-18 season, the National Microbiology Laboratory (NML) has tested 287 influenza viruses for resistance to oseltamivir, and 226 for resistance to zanamivir. All viruses were sensitive to these neuraminidase inhibitors (Table 4).