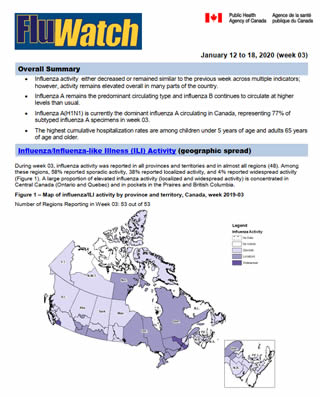 In week 04, the percentage of laboratory tests positive for influenza increased compared to recent weeks. Influenza A and B continue to co-circulate, with an increased proportion of influenza B detections.

To date this season (weeks 35 to 04), 24,448 laboratory detections of influenza were reported:

Detailed information on age and type/subtype has been received for 18,766 laboratory-confirmed influenza cases (Table 1). To date this season (weeks 35 to 04):

In week 04, 1.5% of visits to healthcare professionals were due to influenza-like illness (ILI) which is below the average for this time of year (Figure 4).

Among the 97 participants who reported cough and fever:

To date this season, a total of 493 laboratory-confirmed influenza outbreaks have been reported; 61% (302) in long-term care facilities, 26% (128) in facilities categorized as 'other', 12% (58) in acute care facilities, and 1% (5) in schools/daycares. Of the 464 outbreaks where influenza type was reported, 89% (413) were due to influenza A. Among the 217 outbreaks for which the influenza A subtype was reported, 55% (119) were associated with A(H3N2). To date this season, 34 ILI outbreaks in schools/daycares have also been reported.

To date this season, 1,115 influenza-associated hospitalizations were reported by participating provinces and territoriesFootnote †.

112 ICU admissions and 26 deaths have been reported.

In week 04, 93 pediatric (≤16 years of age) laboratory-confirmed influenza-associated hospitalizations were reported by the Immunization Monitoring Program Active (IMPACT) network (Figure 8). The weekly number of cases increased compared to the previous week which is the same as the 5-year maximum in week 04.

Surveillance of laboratory-confirmed influenza-associated adult (≥16 years of age) hospitalizations by the Canadian Immunization Research Network (CIRN) Serious Outcomes Surveillance (SOS) network began on November 1st for the 2019-20 season. In week 04, the number of cases decreased for the third consecutive week.

To date this season, 411 hospitalizations, 22 intensive care unit admissions, and nine deaths have been reported (Figure 10).

Sequence analysis showed that 100% of the 105 B/Victoria lineage viruses showing reduced titre to B/Colorado/06/2017 had a three amino acid deletion (162-164) in the HA gene. Sequencing is pending for the remaining three viruses.