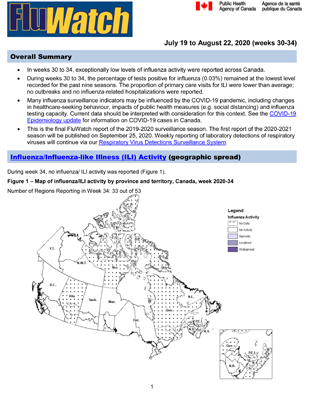 During week 34, no influenza/ILI activity was reported in only one region in BC (Figure 1).

In weeks 30-34, an average of 5,270 tests for influenza were performed at reporting laboratories, which is three times the average for this period over the past 5 seasons.

The percentage of positive tests crossed the seasonal threshold of 5% in week 12 (mid-March), indicating the end of the influenza season at the national level, 9 weeks earlier than average compared to the past 5 seasons. An abrupt end to the 2019-20 influenza season was observed in several countries, concurrent with the implementation of public health measures to reduce the spread of COVID-19.

To date this season (weeks 35 to 34), all influenza types and subtypes have circulated (Figure 3). Among the 55,378 laboratory detections of influenza reported:

Detailed information on age and type/subtype has been received for 42,541 laboratory-confirmed influenza cases (Table 1). To date this season (weeks 35 to 34):

In weeks 30 to 34, an average of 0.3% of visits to healthcare professionals were due to influenza-like illness (ILI) which continues to be lower than average compared to recent seasons. In these five weeks, the proportion of visits for ILI was the lowest observed for this period compared to the past 5 seasons (Figure 4). This trend should be interpreted with caution as there have been changes in healthcare seeking behavior of individuals and a decreasing number of sentinels reporting in recent weeks. Given the evolving Canadian situation with COVID-19, we will continue to monitor this indicator closely.

In week 34, 9,320 participants reported to FluWatchers. During weeks 30 to 34, the proportion of participants reporting symptoms of cough and fever was low at an average of 0.10% (Figure 5). The percentage of participants reporting cough and fever are at the lowest levels ever observed. This decline was concurrent with public health measures to reduce the spread of COVID-19, which coincides with the abrupt end of the influenza season at the national level. Given the ongoing Canadian response to the COVID-19 pandemic, monitoring of this indicator will continue throughout the summer.

Among the 21 participants who reported cough and fever in week 34, 38% (8) consulted a healthcare professional.

In weeks 30 to 34, no outbreaks of influenza or influenza-like illness were reported.

To date this season, 2,485 influenza-associated hospitalizations were reported by participating provinces and territoriesFootnote 1.

308 ICU admissions and 120 deaths have been reported.

In weeks 30 to 34, no pediatric (≤16 years of age) laboratory-confirmed influenza-associated hospitalizations were reported by the Immunization Monitoring Program Active (IMPACT) network (Figure 8). Since the end of March, the weekly number of reported cases has been at the lowest level observed during this period over the past 5 seasons.