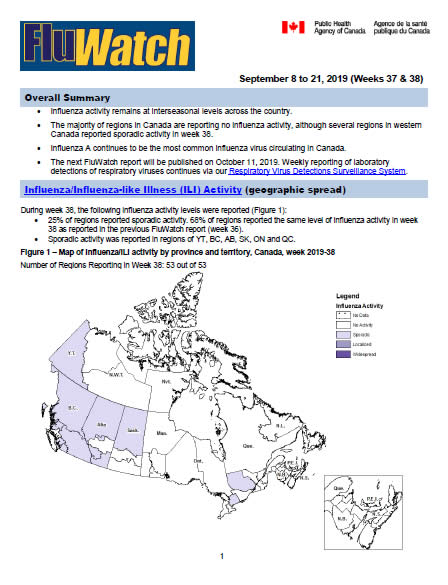 During week 38, the following influenza activity levels were reported (Figure 1):

In weeks 37 and 38, the following results were reported from sentinel laboratories across Canada (Figures 2 and 3):

To date this season (weeks 35 to 38), detailed information on age and type/subtype has been received for 77 laboratory-confirmed influenza cases: 66 (86%) influenza A and 11 (14%) influenza B. Among subtyped influenza A detections, 88% of cases were A(H3N2).

In week 37, 0.8% and in week 38, 1.7%, of visits to healthcare professionals were due to influenza-like illness (ILI) (Figure 4). In week 38, 53% of reporting sentinel practitioners were in BC and AB, where sporadic influenza activity has been reported. These sentinels contributed 58% of the ILI cases reported this week.

In weeks 37 and 38, no laboratory-confirmed influenza outbreaks nor ILI outbreaks were reported.

Number of provinces and territories reporting in weeks 37 and 38: 13 out of 13

In weeks 37 and 38 less than five influenza-associated hospitalizations were reported by participating provinces and territoriesFootnote 1.

To date this season, 6 influenza-associated hospitalizations were reported by participating provinces and territoriesFootnote 1. All cases were associated with influenza A. No ICU admissions or deaths were reported.

Number of provinces and territories reporting in weeks 37 and 38: 9 out of 9

In weeks 37 and 38, no new pediatric (≤16 years of age) hospitalizations with influenza were reported by the Immunization Monitoring Program Active (IMPACT) network.

To date this season, fewer than five pediatric hospitalizations were reported by the IMPACT network.

The National Microbiology Laboratory has not yet reported influenza strain characterization results for influenza viruses collected during the 2019-20 season.

The National Microbiology Laboratory has not yet reported antiviral resistance results for influenza viruses collected during the 2019-20 season.