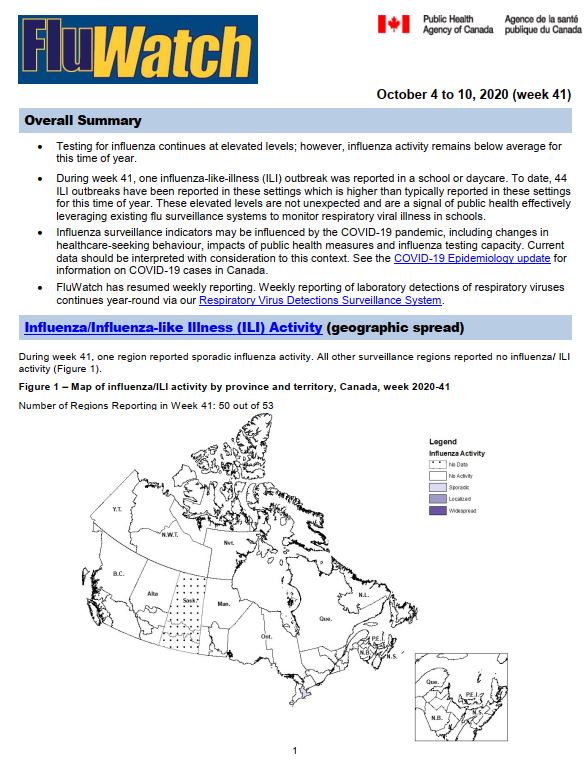 In week 41, 0.47% of visits to healthcare professionals were due to influenza-like illness (ILI) which is similar to previous weeks, and continues to be lower than average compared to recent seasons. To date this season the proportion of visits for ILI was the lowest observed for this period compared to the past six seasons (Figure 4). This trend should be interpreted with caution as there have been changes in healthcare seeking behavior of individuals and a smaller number of sentinels reporting in recent weeks compared to previous seasons.

In week 41, one influenza-like-illness (ILI) outbreak was reported in a school or daycare setting. No other influenza or ILI outbreaks were reported in any other settings.

Outbreaks of ILI are not specific to any one respiratory pathogen and can be due influenza, or other respiratory viruses, including rhinovirus and even COVID-19. Rhinovirus commonly circulates during the fall, and can cause clusters of cases with respiratory illness which could be captured as ILI. For more information on the respiratory viruses currently circulating in Canada, please refer to the Respiratory Virus Detections in Canada Report.

Number of provinces and territories reporting in week 41Footnote 1: 11 out of 13

Number of provinces and territories reporting in week 41: 8 out of 9

Due to the very low influenza circulation to date this season, the National Microbiology Laboratory has not yet received influenza viruses which were collected during the 2020-21 season for strain characterization.

Due to the very low influenza circulation to date this season, the National Microbiology Laboratory has not yet received influenza viruses which were collected during the 2020-21 season for antiviral resistance testing.