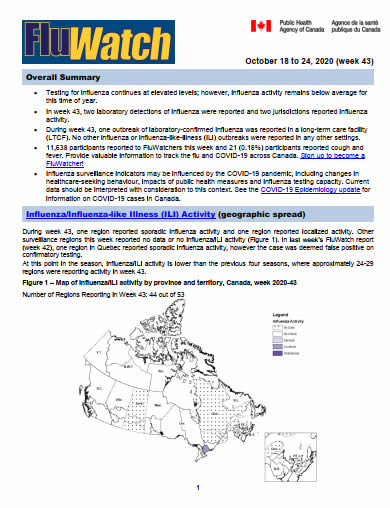 At this point in the season, influenza/ILI activity is lower than the previous four seasons, where approximately 24-29 regions were reporting activity in week 43.

In week 43, two laboratory detections of influenza were reported (Figure 2). Despite elevated levels of testing, the percentage of laboratory tests positive for influenza has remained at exceptionally low levels throughout the period of March to October. In week 43, 7,715 tests for influenza were performed at reporting laboratories, which is 2.0 times the average for this week over the past six seasons. The percentage of tests positive for influenza in week 43 was 0.02%, compared to 2.8% during the past six seasons.

In the FluWatch report for week 42, one laboratory detection of influenza was reported which was later determined to be a false positive on confirmatory testing. To date this season, five influenza detections have been reported, which is significantly lower than the past six seasons wherean average of 434 influenza detections were reported between weeks 35-43.

In week 43, 0.4% of visits to healthcare professionals were due to influenza-like illness (ILI) which is similar to previous weeks, and remains lower than average compared to recent seasons (Figure 4).

In week 43, one outbreak of laboratory-confirmed influenza was reported in a long-term care facility (LTCF).  No other influenza or ILI outbreaks were reported in any other settings.

To date this season, 73 influenza-like-illness (ILI) outbreaks in schools and/or daycares, and one laboratory-confirmed influenza outbreak in a LTCF, have been reported.

Number of provinces and territories reporting in week 43Footnote 1: 11 out of 13

Number of provinces and territories reporting in week 43: 8 out of 9

Due to the very low influenza circulation to date this season, the National Microbiology Laboratory has not yet received influenza viruses which were collected during the 2020-21 season for strain characterization.

Due to the very low influenza circulation to date this season, the National Microbiology Laboratory has not yet received influenza viruses which were collected during the 2020-21 season for antiviral resistance testing.