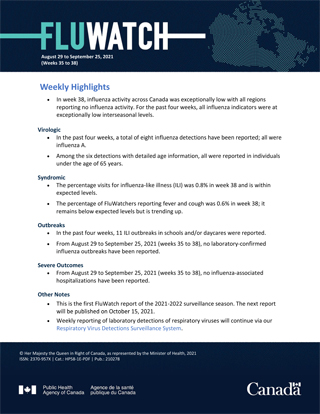 During week 38, all regions reported no influenza/ILI activity (Figure 1).

In weeks 35 to 38, eight laboratory detections of influenza were reported and all were influenza A.

To date this season (August 28 to September 25, 2021), eight influenza detections have been reported, which is lower than what we have seen historically in the past six pre-pandemic seasons, where an average of 87 influenza detections were reported at this point in the season.

Detailed information on age and type/subtype has been received for six laboratory-confirmed influenza detections. Among the six detections, all were in individuals under the age of 65.

In week 38, 0.8% of visits to healthcare professionals were due to influenza-like illness (ILI). Since the beginning of the season, the percentage of visits for ILI has been within expected pre-pandemic levels (Figure 4).

This indicator should be interpreted with caution as there have been changes in healthcare seeking behavior of individuals and a smaller number of sentinels reporting compared to previous seasons.

The percentage of participants reporting cough and fever has been on an upward trend; however, it remains at lower than expected levels.  This may be a direct effect of individual and public health measures enacted to reduce the spread of COVID-19. FluWatchers reporting is not impacted by changes in health services or health seeking behaviours.

Among the 62 participants who reported cough and fever:

In weeks 35 to 38, 11 influenza-like illness (ILI) outbreaks were reported in schools and/or daycares from participating provincesFootnote 1.

All ILI outbreaks have been reported in schools and/or daycares. The number of ILI outbreaks reported to date this season is comparable to the 2020-2021 season but higher than in pre-pandemic seasons.  This is not unexpected given changes to outbreak surveillance, specifically increased vigilance in schools to monitor and report absenteeism due to ILI, and the increased restrictions on attendance for children with symptoms of viral respiratory illness.

Number of provinces and territories reporting in week 37: 13 out of 13

In weeks 35 to 38, no influenza-associated hospitalizations were reported by participating provinces and territoriesFootnote 2.

To date this season (August 28 to September 25, 2021), no influenza-associated hospitalizations were reported by participating provinces and territories.

The last influenza-associated hospitalization reported by participating provinces and territories was reported in week 25 of the 2019-2020 season.

Number of provinces and territories reporting in week 37: 4 out of 9

In weeks 35 to 38, no pediatric (≤16 years of age) influenza-associated hospitalizations were reported by the Immunization Monitoring Program Active (IMPACT) network.

To date this season (August 28 to September 25, 2021), no pediatric influenza-associated hospitalizations were reported by the IMPACT network.

The last pediatric influenza-associated hospitalization was reported by the IMPACT network in week 29 (week ending July 18, 2020) of the 2019-2020 season.

The last influenza-associated adult hospitalization was reported by the CIRN SOS network in week 19 (week ending May 9, 2020) of the 2019-2020 season.

The National Microbiology Laboratory has not yet reported influenza strain characterization results for influenza viruses collected during the 2021-2022 season.

The National Microbiology Laboratory has not yet reported antiviral resistance results for influenza viruses collected during the 2021-2022 season.

Influenza vaccine coverage estimates for the 2021-2022 season are anticipated to be available in February or March 2022.

Influenza vaccine effectiveness estimates for the 2021-2022 season are anticipated to be available in February or March 2022, pending the resumption of community transmission of seasonal influenza.

The data in the FluWatch report represent surveillance data available at the time of writing. All data are preliminary and may change as updates are received.