During epidemiological week 22, 2017 one new case of measles was reported in CanadaFootnote 1, by Newfoundland and Labrador. This case had rash onset in week 20, and is suspected to be linked to an ongoing outbreak. This case was likely exposed to measles while in Nova Scotia and spent the entire infectious period in Nova Scotia.

To date in 2017, 42 cases of measles have been reported in Canada. Two outbreaks have been confirmed – one that began in February and has since concluded, and the other is an ongoing outbreak that began in March and involved four provinces.

No cases of rubella have been reported in 2017 (Figure 1). It has been 67 epidemiologic weeks since the last rubella case was reported (week 6, 2016).

There are currently active* cases of measles reported in two Canadian provinces (Nova Scotia and Newfoundland and Labrador) (Figure 2). 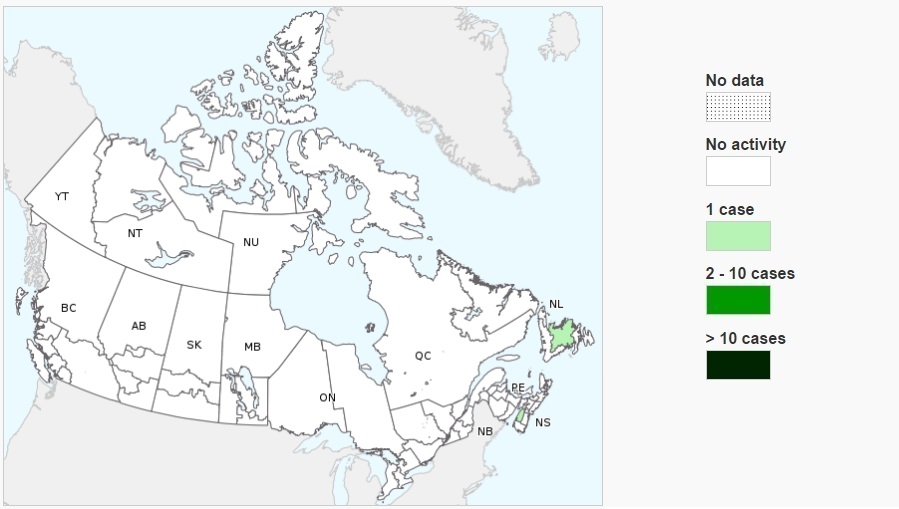 During epidemiological week 22, 2017, 1 new measles genotype result became available. It was geographically linked to an ongoing outbreak in Nova Scotia, and had a genotype D8 sequence identical to the index case which was imported from India.

Figure 3: Distribution of measles genotypes detected in 2017 (n=34) by week† of rash onset.