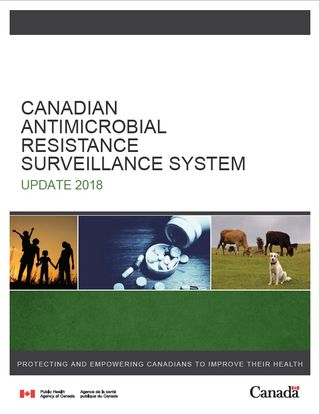 All AMR and AMU content outlined in this report merit attention; however, significant changes in AMR and AMU that have a greater impact on public health are specifically highlighted. Also described are new initiatives such as the analysis of standardized hospital antimicrobial susceptibility (antibiogram) data for Escherichia coli; the results from a prevalence survey on AMR conducted in smaller non-academic acute care hospitals; and the analysis of the effect of AMU stewardship activities on animal populations.

The CARSS-Update 2018 replaces previously reported data with the most recent AMR and AMU surveillance information available. The surveillance results published by CARSS change from year to year, as data quality is improved (e.g., case reporting by hospitals), or as metrics become more accurate (e.g., antimicrobial purchasing data from hospitals, adjusted for antimicrobial returns over time). Therefore, when possible, the results should be referenced from the most recent CARSS publication. The surveillance systems and their methods, as well as the other data systems that informed the CARSS-Update 2018, are summarized later in this publication and are described in greater detail in the CARSS-2017 report.

The CARSS-Update 2018 is comprised of two parts: an Executive Summary, designed to highlight the most relevant AMR and AMU results; and a Technical Annex, that provides a more detailed look at AMR and AMU surveillance data. Within the Technical Annex there are three sections: an AMR section that focuses on priority organisms; an AMU section that focuses on antimicrobials intended for human use; and a section that contains information on antimicrobials intended for use in food-producing animals, companion animals, and crops.

This Executive Summary provides an overview of the key findings from CARSS, summarizes the current state of surveillance on antimicrobial resistance (AMR) and antimicrobial use (AMU), and describes next steps.

The identification of New Delhi metallo-beta-lactamase (NDM) type carbapenemase-producing organisms (CPOs) in 2009 heralded a new era in emerging AMR. These organisms pose a serious public health threat due to their resistance to most antibiotics and their ability to transmit this resistance to other bacteria. Although CPO infection rates among hospitalized patients have remained low and unchanged for the past five years (0.03 infections per 10,000 patient-days since 2012), the rate of CPO colonization has increased by almost five-fold since 2014 (from 0.03 colonizations per 10,000 patient-days to 0.14 in 2017). Consistent with the trends seen in hospital settings, the number of CPO isolates submitted to provincial public health laboratories continued to increase in 2017 (889 isolates, compared to 779 in 2016), and rising CPO rates have also been reported in other jurisdictions.

It is not clear whether the increase in CPO colonization rates in Canadian hospital sites is due to greater awareness and reporting as CPOs are now reportable to public health in three provinces (i.e. Ontario, British Columbia and Alberta), or whether it represents a true increase in colonization rate among Canadians. Regardless of the reasons underlying the increasing rates of CPO colonization, this remains a significant finding.

Over the past decade, Canadian hospitals have implemented a variety of infection prevention and control, antimicrobial stewardship, and quality improvement initiatives to address Clostridioides difficile infection (CDI; formerly known as Clostridium difficile infection). Healthcare-associated C. difficile infection (HA-CDI) rates have steadily decreased over time. In 2017, HA-CDI among hospitalized patients continued to decline, appearing to stabilize at a rate that is almost 40% lower compared to earlier years (3.85 per 10,000 patient-days in 2017, compared to 6.03 in 2012). Since 2015, when surveillance of community-associated (CA)-CDI began in sentinel hospitals, approximately one-third of all CDI cases have been identified as CA-CDI and this proportion remained similar in 2017.

All tested MRSA isolates remained universally susceptible to vancomycin and linezolid with less than 1% resistance to daptomycin. Of note, there has been a consistent annual decrease in clindamycin resistance, dropping from 84% in 2013 to 42% in 2017.

Vancomycin-resistant enterococci (VRE) infections are typically resistant to multiple antibiotic classes which present health practitioners with limited treatment options. The rate of VRE bloodstream infections in sentinel hospitals continued to rise, from 0.18 infections per 10,000 patient-days in 2016 to 0.23 in 2017. Surveillance data also indicate that the rate of non-BSI VRE infection (including urine and wounds) increased for the first time in 2017 (from 0.26 infections per 10,000 patients-days in 2016 to 0.34). Prior to 2017, non-BSI VRE infection had been decreasing each year since 2012.

VRE isolates from sentinel hospitals have demonstrated changes in resistance patterns. Over the past two years, daptomycin resistance has been increasing with current non-susceptibility detected in 9% of isolates. Changes in antimicrobial susceptibility were observed among aminoglycosides, with a substantial increase in resistance to high-level (H-L) gentamicin seen in 2017 (39% of isolates tested, compared to 14% in 2016). In contrast, the proportion of isolates with resistance to H-L streptomycin has decreased by 17% since 2014 (from 41% to 34% in 2017). Of note, 45% of VRE isolates were resistant to nitrofurantoin, one of the first-line drugs for treating enterococcal urinary tract infections (especially in the community); this is a three-fold increase from 2012. In 2017, VRE isolates were universally sensitive to linezolid.

In Canada, the rate of Neisseria gonorrhoeae infection has increased 20% from 55 cases per 100,000 population in 2015 to 65 in 2016. In 2016, fewer isolates were showing decreased susceptibility to cefixime and ceftriaxone (0.3% and 1.8%, respectively). However, the proportion of isolates resistant to azithromycin increased by over 50%, from 5% in 2015 to 7% in 2016. Extensively-drug resistant N. gonorrhoeae remains rare in Canada, with a single imported case reported in 2017.

In 2016, standardized hospital antibiogram data for Escherichia coli (E. coli) were collected.  There were minimal changes in resistance patterns from 2015 to 2016; however, in 2016 higher levels of non-susceptibility to sulfamethoxazole-trimethoprim (23%) and ciprofloxacin (19%) were still found.

A pilot study was conducted in 2017 among 30 northern, smaller community and rural acute care hospitals in nine Canadian provinces and all territories to assess the prevalence of AMR in non-academic healthcare settings. A survey conducted during one 24-hour period found MRSA, VRE, CPOs, extended-spectrum beta-lactamase-producing Enterobacteriaceae or CDI in approximately one quarter of patients who had a microbiological result available.

Antimicrobial use in humans

In 2017, a combined total of 262,590 kilograms of antimicrobials were either dispensed through community pharmacies or purchased by hospitals, reflecting a total expenditure of approximately $822 million. As in previous years, the majority of human antimicrobial use in Canada occurred in the community setting, where 92% of antimicrobials were dispensed through retail pharmacies. The remaining proportion (8%) was purchased for use by hospitals.

In the same year, a combined total of 19.5 Defined Daily Doses (DDDs) per 1,000 inhabitant-days was dispensed by community pharmacies or purchased by hospitals. Stated another way, this means that on an average day, 2% of the Canadian population could be receiving an antimicrobial to treat or prevent a bacterial infection.

Nationally, there was no observed change in the overall amount of antimicrobials dispensed in the community; however, as seen in previous years, community prescription rates varied by province. In 2017, the rate of prescriptions (per 1,000 inhabitants) was lower in all territories combined (358.6) and in British Columbia (569.3), and greater in Prince Edward Island/Newfoundland and Labrador (combined 970.2) compared to other provinces. Prescribing rate varied by antimicrobial, with amoxicillin remaining the most frequently community dispensed drug (164.0 prescriptions per 1,000 inhabitants).

Antimicrobial use in food-producing animals, companion animals, and crops

Overall, there was a significant increase in the number of sentinel farms reporting no use of medically important antimicrobials. In 2017, 32% of pig farms and 19% of chicken farms reported no use of these products, compared to 11% and 7% in 2016, respectively. There was no reported use of fluoroquinolones or third-generation cephalosporins by sentinel chicken farms, consistent with recent policy changes that introduced a ban on the preventative use of Category I antimicrobials on poultry farms across Canada.

In collaboration with partners, PHAC is continuing to strengthen AMR and AMU surveillance through the following initiatives: