Norway: A Profile of Promising Practices from Canada and Abroad – Children’s Tracks Program

“…part of the method was bringing all the players around the table; this forced them to learn that planning and landscape architecture are key components of realizing the ultimate project vision.”

In Vestfold County, Norway, eighty-five percent of children live in densely populated urban regions, so there is a pressing need to ensure there are safe outdoor spaces for children that promote health.

The concept for the project began in the late 1970s, at a time when children were not involved in the land use planning process. A wave of political interest in the idea was spurred by the United Nations’ proclamation of the International Year of the Child in 1979.

Vestfold County promoted this issue through different projects, among them the “Children’s Tracks” program. The project was founded on four main principles: (1) democracy, (2) culture, (3) health, and (4) contribution to sustainability. The goal was to get children to actively map out the outdoor play spaces they enjoyed in their community. Local children were asked to map: where they lived; areas/ places/ playgrounds they used during the summer, winter, and year round; streets/ roads/ trails that were used; as well as any areas that they perceived as dangerous. The ultimate goal was to incorporate this information into future city planning.

Partnerships were made at local, regional, and national levels. Nationally, four ministries were involved. Regionally, the Public Road Administration, the County Governor and the Norwegian Mapping Authority (Vestfold) participated.

Non-traditional partners that were brought to the table included: children, youth, engineers, architects, politicians, elementary school teachers, and parents, all of whom collaborated to make this unique program a success.

At the regional level (Vestfold County), Eva Almhjell, a sociologist and regional advisor, worked full time on these projects. Funding came from participating partners at all levels, but mostly from the municipality.

Initially, the projects focused on raising awareness about children’s rights and their ability to participate in the planning process. Until this time, few people had given children credit for this, so raising awareness was a prerequisite to implementing local mapping programs. Almhjell brought forward the ethical considerations of the project, and started discussions about whether, and how, to involve children in the planning process. Eventually consensus came through discussions about the projects with both the children and adults.

Almhjell applied her background in sociology toward developing the model for this project. “We have been adapting the model to the planning sector. Part of the method was bringing all the players around the table - this forced them to learn that planning and landscape architecture are key components of realizing the ultimate project vision.” Input from partners started as an ad hoc process and morphed into a more formal, structured process.

The key decision-makers in this process were the local politicians. Though skeptical in the beginning, they eventually became very supportive of the project. Though compromise has been a big part of the process over the years, taking children’s interests into consideration in the planning process is now considered part of “doing good business.”

One of the most rewarding aspects of the project was the cooperation amongst the children who were involved. Other models similar to this program have been implemented in Sweden and Denmark; however, children did not participate to the same degree, and so the extent of the children’s involvement in Children’s Tracks is considered a strength of this innovative project. According to Almhjell, one of the only challenges remaining today is politics – “planning is not an endeavour of harmony, but conflict of interest.”

One spin-off as a result of the project is that traffic safety has dramatically improved in Vestfold County, as the infrastructure projects have been completed. The hand drawn maps created by the children were compiled digitally and informed the Vestfold County Municipal Master Plan. The final report submitted to politicians has also been circulated to the children who participated in the initial mapping.

Another unanticipated spin-off is the development of FORMLab, a hands-on educational workshop for children to learn about architecture and design. The program is being developed by Norsk Form, a foundation funded by the Norwegian Ministry of Culture (please see the Resources section at the end of this case study for more information).

Advice to Other Communities

Other communities wanting to undertake a similar project are advised to make it clear to the children involved in the mapping that land use planning can be a drawn-out process. There are often limitations that may lead to unlikely expectations. 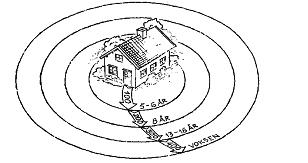 Image Credit: Faktapermen for barnerepresentanten, Norwegian Ministry of the Environment

The success of the program is evident in the planning processes employed today in Norwegian cities. Developers are given the results of the Children’s Tracks mapping exercise and are strongly encouraged to utilize this data in their plans, and to incorporate items such as informal children’s paths and play areas. Today, in Norway, the Children's Tracks projects are a part of regular planning routines at both the local and regional level.