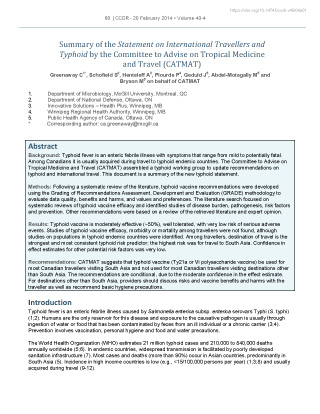 Background: Typhoid fever is an enteric febrile illness with symptoms that range from mild to potentially fatal. Among Canadians it is usually acquired during travel to typhoid endemic countries. The Committee to Advise on Tropical Medicine and Travel (CATMAT) assembled a typhoid working group to update recommendations on typhoid and international travel. This document is a summary of the new typhoid statement.

Methods: Following a systematic review of the literature, typhoid vaccine recommendations were developed using the Grading of Recommendations Assessment, Development and Evaluation (GRADE) methodology to evaluate data quality, benefits and harms, and values and preferences. The literature search focused on systematic reviews of typhoid vaccine efficacy and identified studies of disease burden, pathogenesis, risk factors and prevention. Other recommendations were based on a review of the retrieved literature and expert opinion.

Results: Typhoid vaccine is moderately effective (~50%), well tolerated, with very low risk of serious adverse events. Studies of typhoid vaccine efficacy, morbidity or mortality among travellers were not found, although studies on populations in typhoid endemic countries were identified. Among travellers, destination of travel is the strongest and most consistent typhoid risk predictor; the highest risk was for travel to South Asia. Confidence in effect estimates for other potential risk factors was very low.

Recommendations: CATMAT suggests that typhoid vaccine (Ty21a or Vi polysaccharide vaccine) be used for most Canadian travellers visiting South Asia and not used for most Canadian travellers visiting destinations other than South Asia. The recommendations are conditional, due to the moderate confidence in the effect estimate. For destinations other than South Asia, providers should discuss risks and vaccine benefits and harms with the traveller as well as recommend basic hygiene precautions.

Typhoid fever is an enteric febrile illness caused by Salmonella enterica subsp. enterica serovars Typhi (S. typhi)Footnote 1Footnote 2. Humans are the only reservoir for this disease and exposure to the causative pathogen is usually through ingestion of water or food that has been contaminated by feces from an ill individual or a chronic carrierFootnote 3Footnote 4. Prevention involves vaccination, personal hygiene and food and water precautions.

The Committee to Advise on Tropical Medicine and Travel (CATMAT) provides the Public Health Agency of Canada with ongoing and timely medical, scientific, and public health advice relating to tropical infectious disease and health risks associated with international travel. This is a summary of the CATMAT Statement on International Travellers and Typhoid where a full description of the evidence and recommendations is availableFootnote 18.

This is the first CATMAT statement to use the Grading of Recommendations Assessment, Development and Evaluation (GRADE) methodology to develop recommendationsFootnote 19. GRADE is a new method of grading the quality of the evidence and strength of recommendations in guidelines used by many international organizations.

An analytic framework identifying clinical preventive actions (interventions) for typhoid and risk factors for typhoid disease was developed. Key questions to define the magnitude of benefits and harms were identified as well as the following key "PICO" (population of interest, intervention, comparison and outcome) question:

Among Canadian travellers, does the administration of typhoid vaccine versus no vaccine decrease the incidence of typhoid and the associated morbidity and mortality?

Two types of typhoid vaccine are licensed in Canada, a live oral vaccine (Ty21a), and injectable Vi polysaccharide vaccines (See Table 1). Only evidence for these types of vaccines was reviewed.

Relevant literature was identified by searching Ovid MEDLINE and Embase electronic databases using the terms "typhoid fever" and "travel". The search spanned publications from January 1, 2000 to August 14, 2012. In addition, the Cochrane Database of Systematic Reviews was searched using the term "typhoid" from the start of the database up to and including July 2012. For all searches, only English and/or French articles were retained.

Full details on GRADE methodology are described elsewhereFootnote 25. Briefly, the GRADE approach rates the quality of the evidence for specific clinical outcomes across studies, not study by study, by addressing flaws in methodology, consistency and generalizability of results and demonstrated effectiveness of the treatmentFootnote 26 Footnote 27. The GRADE approach takes into consideration the balance of benefits (efficacy) and harms of typhoid vaccine, the confidence in the estimates of effect for vaccination (high, moderate, low or very low), and what is believed to be the values and preferences of the traveller. GRADE quality assessments of studies of typhoid vaccine efficacy, vaccine adverse events and typhoid risk by destination region were performed, and results were collated into evidence profile and summary of findings tablesFootnote 18.

In this statement, recommendations are expressed as strong or conditional as outlined in the Appendix. Other recommendations, not using the GRADE approach, do not use this terminology. These recommendations were based on evaluation of the relevant literature and expert opinion.

In total, 147 articles met the language and relevancy criteria and were included. Two additional studies on baseline riskFootnote 28Footnote 29 were identified after the initial literature review.

No studies that addressed efficacy of typhoid vaccine in travellers or associated reductions in morbidity and mortality for this population were found. All included vaccine efficacy studies were conducted in populations living in typhoid endemic countries. A 2006 Cochrane Collaboration systematic review assessed 17 randomized or quasi-randomized trialsFootnote 30 of typhoid vaccine among residents of endemic areas. An additional three randomized or quasi-randomized controlled clinical trials published after this systematic review were also identified and included in this analysisFootnote 31Footnote 32 Footnote 33.

Expressed as three year cumulative risk of typhoid, persons receiving typhoid vaccine (Ty21a or Vi polysaccharide) were significantly less likely to develop typhoid fever than those who did not (Relative Risk (RR), 95% CI =0.51 (0.42 to 0.62)). For the same outcome, but measured as a two year cumulative risk of typhoid, RR was lower at 0.43 (0.34 to 0.54). Expressed by vaccine type, estimates ranged from RR=0.34 (0.19 to 0.60) for Ty21a after two years of follow-up to 0.53 (0.43 to 0.54) for Ty 21a after three years of follow-up; efficacy of Vi polysaccharide vaccine was intermediate to these values. Vaccine efficacy for different age groups was assessed separately by vaccine type as results were reported with different age stratifications. For both types of vaccine, the RR estimate was lower in older than in younger persons. However, these differences were not significant.

Estimates of effect were without serious risk of bias; but were rated down for indirectness as they only included residents of endemic areas (not travellers) and often were limited to younger age groups. There was moderate confidence in the estimate of effect for vaccine efficacy. No data on the impact of typhoid vaccination on morbidity and mortality were found.

Based on clinical trial data, adverse events (AE) associated with typhoid vaccines are generally mild and not significantly different from controls for: fever, vomiting, diarrhea, headaches, rash, or erythema. With Vi polysaccharide, pain at the injection site was more common among the vaccine recipients (RR=3.68; (1.96 to 6.93)). For enteric coated Ty21a, there was increased risk of: any mild adverse event (RR=1.78; (1.08 to 2.95)) Footnote 30 and nausea or abdominal pain (RR=2.13; (1.33 to 3.41)). Based on these data, it was estimated that there would be one additional AE due to pain for every 13 persons receiving Vi polysaccharide vaccine; and one mild AE and one nausea and abdominal pain AE for every 18 and 31 persons, respectively, receiving Ty21a.

The strongest and most consistent predictor of typhoid risk in travellers is destination of travel. The estimated risk of developing travel associated typhoid is about: 1/3,000 travellers for travel to the South Asia (high risk), 1/50,000-100,000 for travel to Sub-Saharan Africa, North Africa and the Middle East, or South America (intermediate risk), and < 1/300,000 for travel to the Caribbean and Central America (low risk). South Asia is defined as Afghanistan, Bangladesh, Bhutan, India, Nepal, Maldives, Pakistan, and Sri Lanka. Among these countries, the large majority (≥ 90%) of cases of typhoid among travellers were reported from India, Pakistan and Bangladesh.

The confidence in the baseline estimates of typhoid risk by destination was reduced from high to moderate because of risk of bias due to possible under-ascertainment of cases and imprecision (i.e. unable to calculate confidence intervals due to incomplete stratified denominator data).

Several studies have identified other factors that increase the risk of travel associated typhoid, including travelling children, those visiting friends and relatives (VFRs), the presence of achlorhydria or use of acid suppression therapy and longer duration of travel. The incremental magnitude of risk that these factors contribute in addition to travel destination is unclear.

There is evidence that typhoid vaccine is cost effective for residents of some endemic areasFootnote 34Footnote 35. However, cumulative risk is much higher among resident populations, and it is not appropriate to extrapolate cost-effectiveness to travellers paying for their own vaccine. No studies on traveller values and preferences or "Willingness to Pay" for typhoidFootnote 36 or other travel-related immunizations were identified. In the absence of data, it was estimated that the majority of Canadian travellers would consider typhoid vaccine use worth the cost and inconvenience where the risk of typhoid is estimated to be greater than 1 in 10,000 travellers, although at the individual level this decision may be influenced by other risk factors.

The WHO considers fluoroquinolones to be the first line agents for typhoid treatmentFootnote 37Footnote 38. In a 2011 Cochrane review, fluoroquinolones were found to result in fewer clinical failures compared to chloramphenicol, co-trimoxazole, amoxicillin and ampicillinFootnote 37. When the performance of quinolones was compared to other agents including cephalosporins (ceftriaxone and cefixime) or azithromycin, clinical outcomes appeared to be equivalent in most studies. Definitive conclusions could not be made as most of the data came from small underpowered studies and resistance patterns differ between geographic regions and over time. When deciding on the optimal empiric therapy for typhoid, antibiotic resistance patterns in the travel destination countries should be consideredFootnote 3Footnote 39. Of particular importance is the increasing prevalence of fluoroquinolone resistance among Salmonella tyhpi isolates from AsiaFootnote 37.

Interventions such as hand washing and avoiding high risk foods entail minimal or no risk, inconvenience, or cost, and there is appreciable indirect evidence of benefit in terms of reducing typhoid incidenceFootnote 38.

Paratyphoid fever, caused by Salmonella enterica serovar Paratyphi A, B and C, is a systemic disease with clinical features indistinguishable from typhoid fever. The global burden, estimated at 5.4 million cases annually, may be increasingFootnote 6; as is the prevalence of antibiotic resistance and the number of travel-related cases. It is unlikely that injectable Vi vaccines would provide protection because the vaccine elicits antibodies for an antigen that is not present in S. paratyphi A and B. In contrast, Ty21a vaccines elicit serum and mucosal antibodies to S. typhi O, H and other antigens, which are shared with S. paratyphi. However, current evidence is not sufficient to recommend oral typhoid vaccine (Ty21a) for protection against paratyphoid.

The risk of typhoid to travellers is generally low and varies by region. It is highest for travellers to South Asia. The low risk of typhoid combined with the moderate efficacy of the vaccine mean that the benefits of vaccination are modest (efficacy ~50%); however, the vaccines have a good safety profile. Following the review of all evidence and taking into consideration the vaccine efficacy, risk for typhoid and safety profile, CATMAT suggests that the majority of travellers to the South Asia be given typhoid vaccine (Ty21a or Vi polysaccharide vaccine) and not be used for travellers to all other endemic areas (See Table 2). The recommendations are conditional, due to the moderate confidence in the effect estimate.

Committee to Advise on Tropical Medicine and Travel (CATMAT). . 2014.