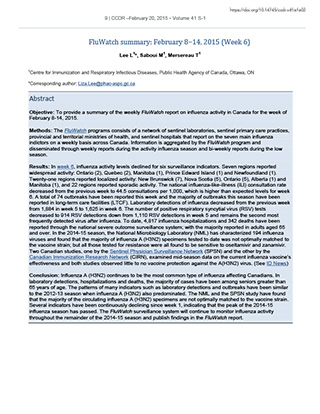 Objective: To provide a summary of the weekly FluWatch report on influenza activity in Canada for the week of February 8-14, 2015.

Methods: The FluWatch program consists of a network of sentinel laboratories, sentinel primary care practices, provincial and territorial ministries of health, and sentinel hospitals that report on the seven main influenza indictors on a weekly basis across Canada. Information is aggregated by the FluWatch program and disseminated through weekly reports during the activity influenza season and bi-weekly reports during the low season.

Results: In week 6, influenza activity levels declined for six surveillance indicators. Seven regions reported widespread activity: Ontario (2), Quebec (2), Manitoba (1), Prince Edward Island (1) and Newfoundland (1). Twenty-one regions reported localized activity: New Brunswick (7), Nova Scotia (5), Ontario (5), Alberta (1) and Manitoba (1), and 22 regions  reported sporadic activity. The national influenza-like-illness (ILI) consultation rate decreased from the previous week to 44.5 consultations per 1,000, which is higher than expected levels for week 6. A total of 74 outbreaks have been reported this week and the majority of outbreaks this season have been reported in long-term care facilities (LTCF). Laboratory detections of influenza decreased from the previous week from 1,884 in week 5 to 1,625 in week 6. The number of positive respiratory syncytial virus (RSV) tests decreased to 914 RSV detections down from 1,110 RSV detections in week 5 and remains the second most frequently detected virus after influenza. To date, 4,817 influenza hospitalizations and 342 deaths have been reported through the national severe outcome surveillance system; with the majority reported in adults aged 65 and over. In the 2014-15 season, the National Microbiology Laboratory (NML) has characterized 194 influenza viruses and found that the majority of influenza A (H3N2) specimens tested to date was not optimally matched to the vaccine strain; but all those tested for resistance were all found to be sensitive to oseltamivir and zanamivir.  Two Canadian studies, one by the Sentinel Physician Surveillance Network (SPSN) and the other by the Canadian Immunization Research Network (CIRN), examined mid-season data on the current influenza vaccine’s effectiveness and both studies observed little to no vaccine protection against the A(H3N2) virus. (See ID News)

Conclusion: Influenza A (H3N2) continues to be the most common type of influenza affecting Canadians. In laboratory detections, hospitalizations and deaths, the majority of cases have been among seniors greater than 65 years of age. The patterns of many indicators such as laboratory detections and outbreaks have been similar to the 2012-13 season when influenza A (H3N2) also predominated. The NML and the SPSN study have found that the majority of the circulating influenza A (H3N2) specimens are not optimally matched to the vaccine strain. Several indicators have been continuously declining since week 1, indicating that the peak of the 2014-15 influenza season has passed. The FluWatch surveillance system will continue to monitor influenza activity throughout the remainder of the 2014-15 season and publish findings in the FluWatch report.

The authors gratefully acknowledge and thank all the FluWatch surveillance partners who have participated in the FluWatch program during the 2014-15 influenza season including provincial and territorial health authorities, sentinel laboratories and physicians, IMPACT, PCIRN-SOS, NML and CFEZID.