Risks and benefits of insecticide use for vector control 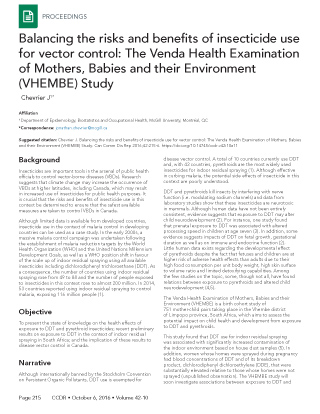 Balancing the risks and benefits of insecticide use for vector control: The Venda Health Examination of Mothers, Babies and their Environment (VHEMBE) Study

Insecticides are important tools in the arsenal of public health officials to control vector-borne diseases (VBDs). Research suggests that climate change may increase the occurrence of VBDs at higher latitudes, including Canada, which may result in increased use of insecticides for public health purposes. It is crucial that the risks and benefits of insecticide use in this context be determined to ensure that the safest available measures are taken to control VBDs in Canada.

Although limited data is available from developed countries, insecticide use in the context of malaria control in developing countries can be used as a case study. In the early 2000s, a massive malaria control campaign was undertaken following the establishment of malaria reduction targets by the World Health Organization (WHO) and the United Nations Millennium Development Goals, as well as a WHO position shift in favour of the scale up of indoor residual spraying using all available insecticides including dichlorodiphenyl trichloroethane (DDT). As a consequence, the number of countries using indoor residual spraying rose from 49 to 88 and the number of people exposed to insecticides in this context rose to almost 200 million. In 2014, 53 countries reported using indoor residual spraying to control malaria, exposing 116 million peopleFootnote 1.

To present the state of knowledge on the health effects of exposure to DDT and pyrethroid insecticides; recent preliminary results on exposure to DDT in the context of indoor residual spraying in South Africa; and the implication of these results to disease vector control in Canada.

Although internationally banned by the Stockholm Convention on Persistent Organic Pollutants, DDT use is exempted for disease vector control. A total of 10 countries currently use DDT and, with 43 countries, pyrethroids are the most widely used insecticides for indoor residual sprayingFootnote 1. Although effective in curbing malaria, the potential side effects of insecticide in this context are poorly understood.

DDT and pyrethroids kill insects by interfering with nerve function (i.e. modulating sodium channels) and data from laboratory studies show that these insecticides are neurotoxic in mammals. Although human data have not been entirely consistent, evidence suggests that exposure to DDT may alter child neurodevelopmentFootnote 2. For instance, one study found that prenatal exposure to DDT was associated with altered processing speed in children at age sevenFootnote 3. In addition, some evidence suggests impacts of DDT on fetal growth, gestational duration, as well as on immune and endocrine functionFootnote 2. Little human data exists regarding the developmental effect of pyrethroids despite the fact that fetuses and children are at higher risk of adverse health effects than adults due to their high food consumption per unit body weight, high skin surface to volume ratio, and limited detoxifying capabilities. Among the few studies on the topic, some, though not all, have found relations between exposure to pyrethroids and altered child neurodevelopmentFootnote 4Footnote 5.

The Venda Health Examination of Mothers, Babies and their Environment (VHEMBE) is a birth cohort study of 751 mother-child pairs taking place in the Vhembe district of Limpopo province, South Africa, which aims to assess the potential impact on child health and development from exposure to DDT and pyrethroids.

This study found that DDT use for indoor residual spraying was associated with significantly increased contamination of the indoor environment based on house dust samplesFootnote 5. In addition, women whose homes were sprayed during pregnancy had blood concentrations of DDT and of its breakdown product, dichlorodiphenyl dichloroethylene (DDE), that were substantially elevated relative to those whose homes were not sprayed (unpublished observation). The VHEMBE study will soon investigate associations between exposure to DDT and pyrethroids and fetal growth, gestational duration, thyroid hormones, neurodevelopment and immune function.

Indoor residual spraying with DDT was associated with indoor contamination and elevated exposure among pregnant women, which may affect child health and development. Although pyrethroids are one of the main classes of insecticides considered for use to control VBDs in Canada, little data exist on the impact of indoor residual spraying or space spraying on human exposure to these insecticides or child health. Research on this topic is urgently needed so that public health officials may make informed decisions for VBD control in Canada. This is more immediately demonstrated by the recent spike in Zika cases on the American continent, which may be an early development in an increase in VBD incidence in Canada as a result of climate change.