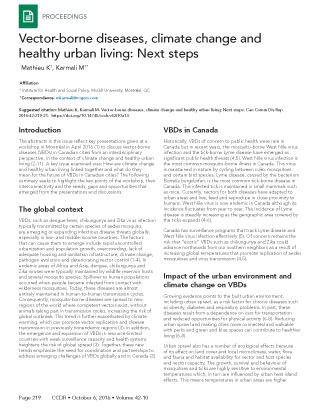 The abstracts in this issue reflect key presentations given at a workshop in Montreal in April 2016Footnote 1 to discuss vector-borne diseases (VBDs) in Canadian cities from an interdisciplinary perspective, in the context of climate change and healthy urban livingFootnote 2Footnote 3Footnote 4Footnote 5Footnote 6Footnote 7Footnote 8Footnote 9Footnote 10Footnote 11. A key issue examined was: How are climate change and healthy urban living linked together and what do they mean for the future of VBDs in Canadian cities? The following summary seeks to highlight the key points of the workshop, their interconnectivity and the needs, gaps and opportunities that emerged from the presentations and discussions.

VBDs, such as dengue fever, chikungunya and Zika virus infection typically transmitted by the aedes mosquito, are emerging or expanding infectious disease threats globally, especially in low- and middle-income countries. The factors that can cause them to emerge include rapid uncontrolled urbanization and population growth, overcrowding, lack of adequate housing and sanitation infrastructure, climate change, pathogen evolution and deteriorating vector controlFootnote 1Footnote 2Footnote 3Footnote 4. In endemic areas of Africa and Asia, dengue, chikungunya and Zika viruses were typically maintained by wildlife reservoir hosts and several mosquito species. Spillover to human populations occurred when people became infected from contact with wilderness mosquitoes. Today, these diseases are almost entirely maintained in human-to-human transmission cycles. Consequently, mosquito-borne diseases are spread to new regions of the world where competent vectors exist, without animals taking part in transmission cycles, increasing the risk of global outbreak. This trend is further exacerbated by climate warming, which can promote vector replication and disease transmission in previously nonendemic regionsFootnote 3. In addition, the emergence and expansion of VBDs in resource-limited countries with weak surveillance capacity and health systems heightens the risk of global spreadFootnote 3. Together, these new trends emphasize the need for coordination and partnerships to address emerging challenges of VBDs globally and in CanadaFootnote 3.

Historically, VBDs of concern to public health were rare in Canada but in recent years, the mosquito-borne West Nile virus infection and the tick-borne Lyme disease have emerged as significant public health threatsFootnote 4Footnote 5. West Nile virus infection is the most common mosquito-borne illness in Canada. This virus is maintained in nature by cycling between culexmosquitoes and certain bird species. Lyme disease, caused by the bacterium Borrelia burgdorferi, is the most common tick-borne disease in Canada. This infected tick is maintained in small mammals such as mice. Currently, vectors for both diseases have adapted to urban areas and live, feed and reproduce in close proximity to humans. West Nile virus is now endemic in Canada although its incidence fluctuates from year to year. The incidence of Lyme disease is steadily increasing as the geographic area covered by the ticks expandsFootnote 4Footnote 5Footnote 6.

Canada has surveillance programs that track Lyme disease and West Nile virus infection effectivelyFootnote 5. Of concern remains the risk that "exotic" VBDs such as chikungunya and Zika could advance northwards from our southern neighbors as a result of increasing global temperatures that promote replication of aedes mosquitoes and virus transmissionFootnote 4Footnote 5.

Impact of the urban environment and climate change on VBDs

Growing evidence points to the built urban environment, including urban sprawl, as a risk factor for chronic diseases such as obesity, diabetes and respiratory problems. In part, these diseases result from a dependence on cars for transportation and reduced opportunities for physical activity Footnote 6Footnote 7Footnote 8. Reducing urban sprawl and making cities more connected and walkable with parks and green and blue spaces can contribute to healthier livingFootnote 6Footnote 7Footnote 8.

Urban sprawl also has a number of ecological effects because of its effect on land cover and local microclimate, water, flora and fauna and habitat availability for vector and host species and vector capacity. The growth, survival and behaviour of mosquitoes and ticks are highly sensitive to environmental temperatures which, in turn are influenced by urban heat island effects. This means temperatures in urban areas are higher than in the surrounding rural areasFootnote 6. Efforts to mitigate heat island effects by creating more green and blue places such as parks and lakes could promote replication of mosquitoes, especially if combined with climate warmingFootnote 8. This may also be exacerbated by pools of stagnant water associated with particular types of landscape and drainage design in both urban and suburban areasFootnote 3Footnote 4Footnote 6Footnote 8.

Increasing global temperatures are a major risk factor for the expansion of emerging VBDs to countries with temperate climates. Although mitigation of climate change has become a global priority, this remains an ongoing challenge with limited prospects for improvement in the short to medium term. Strategies include addressing social determinants of health (especially in low- and middle-income countries), reducing heat island effects and urban sprawl, and promoting urban design principles that enhance healthy living while minimizing opportunities for vector breeding.

Increased surveillance of currently endemic VBD such as Lyme disease and West Nile virusFootnote 9, close monitoring, including both human surveillance and vector surveillanceFootnote 9 of possible oncoming VBDs in areas at risk for emergence and rapid case-detection for travel-related arrival of exotic VBDs needs to be prioritizedFootnote 4Footnote 5. A strong communication strategy should be developed for the public on risk reduction, and for physicians, on a diagnosis and treatmentFootnote 9. Messaging about personal protection measures also needs to be adapted to take into account changing urban populations and urban millennials' response to risks and threats Footnote 10.

Lastly, there is an urgent need to evaluate and further develop vector control methods. For example, pyrethriod insecticides, larvicides and other chemicals are in use, but data on their effectiveness and safety are limitedFootnote 11.

There is general consensus on the need to continue to advocate strongly against climate change to reduce the risk of VBDs. This could include:

Gaps at the local level could be filled by:

Strategies at the global level include:

In terms of next steps, a structured symposium was proposed for which invitees would prepare detailed position papers and an agenda for in-depth research would be articulated, that could lead to focused applications for collaborative interdisciplinary researchFootnote 8.

Both in a global context and in Canada, VBDs are of highest concern when placed in the context of climate warming and changes in land-use patterns. The built environment of cities is an important determinant of health. Enlightened urban design can help lower rates of chronic disease and limit the impacts of VBDs. This workshop, with participants from different disciplines and sectors, succeeded in promoting an appreciation of the many different perspectives that should be taken into account in order to look at the future in a climate-change context and to coordinate efforts for a global health partnership.

Chevrier J. Balancing the risks and benefits of insecticide use for vector control: The Venda Health Examination of Mother, Babies and their Environment (VHEMBE) Study. Can Comm Dis Rep 2016;42:215-6. http://www.phac-aspc.gc.ca/publicat/ccdr-rmtc/16vol42/dr-rm42-10/ar-11-eng.php.