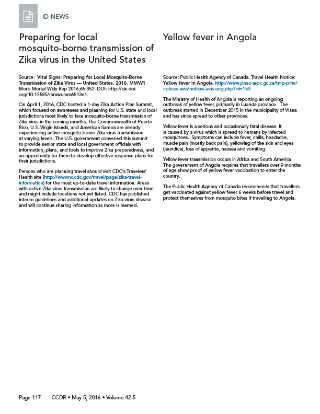 On April 1, 2016, CDC hosted a 1-day Zika Action Plan Summit, which focused on awareness and planning for U.S. state and local jurisdictions most likely to face mosquito-borne transmission of Zika virus in the coming months. The Commonwealth of Puerto Rico, U.S. Virgin Islands, and American Samoa are already experiencing active mosquito-borne Zika virus transmission at varying levels. The U.S. government convened this summit to provide senior state and local government officials with information, plans, and tools to improve Zika preparedness, and an opportunity for them to develop effective response plans for their jurisdictions.

Persons who are planning travel should visit CDC's Travelers' Health site for the most up-to-date travel information. Areas with active Zika virus transmission are likely to change over time and might include locations not yet listed. CDC has published interim guidelines and additional updates on Zika virus disease and will continue sharing information as more is learned.

The Ministry of Health of Angola is reporting an ongoing outbreak of yellow fever, primarily in Luanda province. The outbreak started in December 2015 in the municipality of Viana and has since spread to other provinces.

Yellow fever is a serious and occasionally fatal disease. It is caused by a virus which is spread to humans by infected mosquitoes. Symptoms can include fever, chills, headache, muscle pain (mostly back pain), yellowing of the skin and eyes (jaundice), loss of appetite, nausea and vomiting.

Yellow fever transmission occurs in Africa and South America. The government of Angola requires that travellers over 9 months of age show proof of yellow fever vaccination to enter the country.

The Public Health Agency of Canada recommends that travellers get vaccinated against yellow fever 6 weeks before travel and protect themselves from mosquito bites if travelling to Angola.