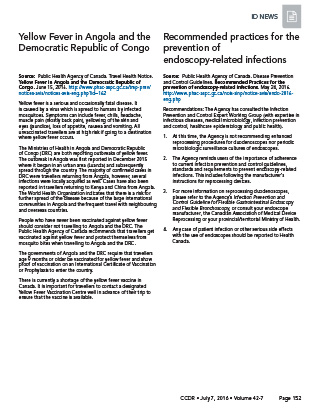 Yellow Fever in Angola and the Democratic Republic of Congo

Yellow fever is a serious and occasionally fatal disease. It is caused by a virus which is spread to humans by infected mosquitoes. Symptoms can include fever, chills, headache, muscle pain (mostly back pain), yellowing of the skin and eyes (jaundice), loss of appetite, nausea and vomiting. All unvaccinated travellers are at high risk if going to a destination where yellow fever occurs.

The Ministries of Health in Angola and Democratic Republic of Congo (DRC) are both reporting outbreaks of yellow fever. The outbreak in Angola was first reported in December 2015 where it began in an urban area (Luanda) and subsequently spread through the country. The majority of confirmed cases in DRC were travellers returning from Angola, however, several infections were locally acquired as well. Cases have also been reported in travellers returning to Kenya and China from Angola. The World Health Organization indicates that there is a risk for further spread of the disease because of the large international communities in Angola and the frequent travel with neighbouring and overseas countries.

The governments of Angola and the DRC require that travellers age 9 months or older be vaccinated for yellow fever and show proof of vaccination on an International Certificate of Vaccination or Prophylaxis to enter the country.

There is currently a shortage of the yellow fever vaccine in Canada. It is important for travellers to contact a designated Yellow Fever Vaccination Centre well in advance of their trip to ensure that the vaccine is available.

Recommended practices for the prevention of endoscopy-related infections

Source: Public Health Agency of Canada. Disease Prevention and Control Guidelines. Recommended practices for the prevention of endoscopy-related infections (May 24, 2016).