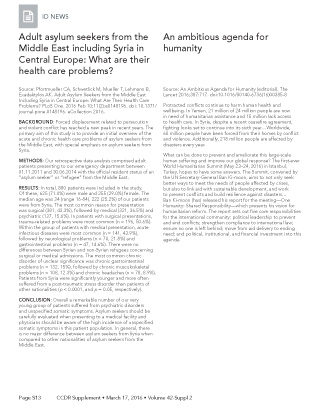 Adult asylum seekers from the Middle East including Syria in Central Europe: What are their health care problems?

Background: Forced displacement related to persecution and violent conflict has reached a new peak in recent years. The primary aim of this study is to provide an initial overview of the acute and chronic health care problems of asylum seekers from the Middle East, with special emphasis on asylum seekers from Syria.

Methods: Our retrospective data analysis comprised adult patients presenting to our emergency department between 01.11.2011 and 30.06.2014 with the official resident status of an "asylum seeker" or "refugee" from the Middle East.

Conclusion: Overall a remarkable number of our very young group of patients suffered from psychiatric disorders and unspecified somatic symptoms. Asylum seekers should be carefully evaluated when presenting to a medical facility and physicians should be aware of the high incidence of unspecified somatic symptoms in this patient population. In general, there is no major difference between asylum seekers from Syria when compared to other nationalities of asylum seekers from the Middle East.

An ambitious agenda for humanity

Protracted conflicts continue to harm human health and well-being. In Yemen, 21 million of 24 million people are now in need of humanitarian assistance and 15 million lack access to health care. In Syria, despite a recent ceasefire agreement, fighting looks set to continue into its sixth year…Worldwide, 60 million people have been forced from their homes by conflict and violence. Additionally, 218 million people are affected by disasters every year.

What can be done to prevent and ameliorate this large-scale human suffering and improve our global response? The first-ever World Humanitarian Summit (May 23-24, 2016) in Istanbul, Turkey, hopes to have some answers. The Summit, convened by the UN Secretary-General Ban Ki-moon, aims to not only seek better ways to meet the needs of people affected by crises, but also to link aid with sustainable development, and work to prevent conflicts and build resilience against disasters… Ban Ki-moon (has) released his report for the meeting—One Humanity: Shared Responsibility—which presents his vision for humanitarian reform. The report sets out five core responsibilities for the international community: political leadership to prevent and end conflicts; strengthen compliance to international law; ensure no one is left behind; move from aid delivery to ending need; and political, institutional, and financial investment into this agenda.