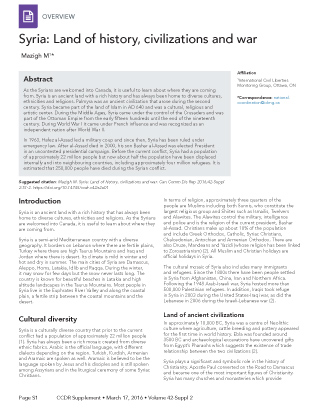 As the Syrians are welcomed into Canada, it is useful to learn about where they are coming from. Syria is an ancient land with a rich history and has always been home to diverse cultures, ethnicities and religions. Palmyra was an ancient civilization that arose during the second century. Syria became part of the land of Islam in AD 640 and was a cultural, religious and artistic center. During the Middle Ages, Syria came under the control of the Crusaders and was part of the Ottoman Empire from the early fifteen hundreds until the end of the nineteenth century. During World War I, it came under French influence and was recognized as an independent nation after World War II.

In 1963, Hafez al-Assad led a military coup and since then, Syria has been ruled under emergency law. After al-Assad died in 2000, his son Bashar al-Assad was elected President in an uncontested presidential campaign. Before the current conflict, Syria had a population of approximately 22 million people but now about half the population have been displaced internally and into neighbouring countries, including approximately four million refugees. It is estimated that 250,000 people have died during the Syrian conflict.

Syria is an ancient land with a rich history that has always been home to diverse cultures, ethnicities and religions. As the Syrians are welcomed into Canada, it is useful to learn about where they are coming from.

Syria is a semi-arid Mediterranean country with a diverse geography. It borders on Lebanon where there are fertile plains, Turkey where there are high Taurus Mountains and Iraq and Jordan where there is desert. Its climate is mild in winter and hot and dry in summer. The main cities of Syria are Damascus, Aleppo, Homs, Latakia, Idlib and Raqqa. During the winter, it may snow for few days but the snow never lasts long. The country is known for its beautiful beaches in Latakia and high altitude landscapes in the Taurus Mountains. Most people in Syria live in the Euphrates River Valley and along the coastal plain, a fertile strip between the coastal mountains and the desert.

Syria is a culturally diverse country that prior to the current conflict had a population of approximately 22 million people Footnote 1. Syria has always been a rich mosaic created from diverse ethnic fabrics. Arabic is the official language, with different dialects depending on the region. Turkish, Kurdish, Armenian and Aramaic are spoken as well. Aramaic is believed to be the language spoken by Jesus and his disciples and is still spoken among Assyrians and in the liturgical ceremony of some Syriac Christians.

In terms of religion, approximately three quarters of the people are Muslims including both Sunnis, who constitute the largest religious group and Shiites such as Ismailis, Twelvers and Alawites. The Alawites control the military, intelligence and police and is the religion of the current president, Bashar al-Assad. Christians make up about 10% of the population and include Greek Orthodox, Catholic, Syriac Christians, Chalcedonian, Antochian and Armenian Orthodox. There are also Druze, Mandeans and Yazidi (whose religion has been linked to Zoroastrianism) Footnote 2. All Muslim and Christian holidays are official holidays in Syria.

The cultural mosaic of Syria also includes many immigrants and refugees. Since the 1800s, there have been people settled in Syria from Afghanistan, China, Iran and Northern Africa. Following the 1948 Arab-Israeli war, Syria hosted more than 500,000 Palestinian refugees. In addition, Iraqis took refuge in Syria in 2003 during the United States-Iraq war, as did the Lebanese in 2006 during the Israeli-Lebanese war Footnote 2.

In approximately 10,000 BC, Syria was a centre of Neolithic culture where agriculture, cattle breeding and pottery appeared for the first time in world history. Ebla was founded around 3,500 BC and archaeological excavations have uncovered gifts from Egypt's Pharaohs which suggest the existence of trade relationship between the two civilizations Footnote 2.

Syria plays a significant and symbolic role in the history of Christianity. Apostle Paul converted on the road to Damascus and became one of the most important figures of Christianity. Syria has many churches and monasteries which provide historical evidence of the ancient and rich Christian heritage of the region.

Palmyra was an ancient civilization that arose along a trade route in an oasis during the second century. It was a Palmyrene king who defeated the Persian emperor and controlled the entirety of the Roman East Empire. Then his successor and widow Zenobia established the Palmyrene Empire which briefly conquered Egypt, Syria, Palestine, much of Asia Minor, Judah and Lebanon before it was brought under Roman control in AD 273.

Unfortunately the current conflict has damaged many of Syria's ancient landmarks. Currently all six of Syria's World Heritage sites are on the endangered list Footnote 3.

Syria became part of the land of Islam in AD 640. The capital of Syria, Damascus (or Dimashk, as its inhabitants call it in Arabic) was part of the Muslim Umayyad Dynasty in the seventh century and became a cultural, religious and artistic center. The famous Umayyad Mosque was built at that time and drew many scholars and visitors from all parts of the new empire Footnote 4.

During the Crusades from 1098 to 1189, the Crusaders brought many Syrian regions under their control. Syria then became part of Egypt's Ayyubid dynasty.

In 1516, the Ottoman Empire incorporated Syria. Arabic was kept as the official language and Damascus became the major stopover for Mecca. A social and legal system was developed that allowed all ethnic groups to live in relative peace and harmony, but this peace began to destabilize during the mid-19th century with the expansion of Western empires.

By the end of the 19th century, the Ottoman Empire came increasingly under British and French influence. During World War I a secret Sykes-Picot agreement was signed that divided the Ottoman Empire into the British and French zones of influence and Syria fell under the French mandate. In 1920, Syria and France negotiated a treaty of independence, but it was not ratified. It was only in April 1946, that the French started leaving the country and Syria was recognized by the United Nations Footnote 1.

Between the 1940s and the 1960s, Syrian politics were dominated by coups and turmoil. In 1956, Syria signed a pact with the Soviet Union as a result of the Suez Crisis and this established a long and deep Russian influence over Syria through military exchange and trade. In 1958, there was a merger between Egypt and Syria despite Syrian resistance to this.

In 1963, Hafez al-Assad was brought to power through a military coup. Since then, Syrian has been ruled under emergency law that has suspended the constitution and most of the civil rights for its citizens. Hafez al-Assad stayed in power from 1970 until he died in 2000. His son Bashar al-Assad was elected President in an uncontested presidential campaign.

It is estimated that less than half of Syria's population is still living in their home with over four million registered as refugees in neighbouring countries, such as Lebanon, Turkey, Jordan, Iraq and Egypt Footnote 5. There are approximately 7.6 million people who are internally displaced or are in neighbouring countries living in camps, in cities and rural areas but not easily reached by humanitarian aid Footnote 5. Since the civil war erupted, the Syrian economy has fallen by over 60% and the Syrian pound has lost 80% of its value Footnote 2. It is estimated that 250,000 people in Syria have died during the Syrian conflict since it broke out in March 2011 Footnote 6.