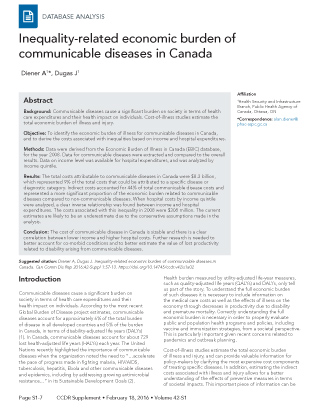 Background: Communicable diseases cause a significant burden on society in terms of health care expenditures and their health impact on individuals. Cost-of-illness studies estimate the total economic burden of illness and injury.

Objective: To identify the economic burden of illness for communicable diseases in Canada, and to derive the costs associated with inequalities based on income and hospital expenditures.

Methods: Data were derived from the Economic Burden of Illness in Canada (EBIC) database, for the year 2008. Data for communicable diseases were extracted and compared to the overall results. Data on income level was available for hospital expenditures, and was analyzed by income quintile.

Conclusion: The cost of communicable disease in Canada is sizable and there is a clear correlation between lower income and higher hospital costs. Further research is needed to better account for co-morbid conditions and to better estimate the value of lost productivity related to disability arising from communicable diseases.

Health burden measured by utility-adjusted life-year measures, such as quality-adjusted life years (QALYs) and DALYs, only tell us part of the story. To understand the full economic burden of such diseases it is necessary to include information on the medical care costs as well as the effects of illness on the economy through decreases in productivity due to disability and premature mortality. Correctly understanding the full economic burden is necessary in order to properly evaluate public and population health programs and policies, including vaccine and immunization strategies, from a societal perspective. This is particularly important given recent concerns related to pandemics and outbreak planning.

Cost-of-illness studies estimate the total economic burden of illness and injury, and can provide valuable information for policy-makers by clarifying the most expensive cost components of treating specific diseases. In addition, estimating the indirect costs associated with illness and injury allows for a better understanding of the effects of preventive measures in terms of societal impacts. This important piece of information can be used in economic evaluations and the allocation of public health resources.

The direct costs refer to the direct expenditures associated with the treatment of diseases, for example, hospital care, physician care (primary care) and pharmaceutical consumption. In other words, they refer to those services for which some sort of payment is made. The indirect costs refer to other economic consequences attributable to illness or injury that result in lost resources but do not involve direct payment related to the disease. This includes labour supply effects such as the value of lost production due to morbidity (i.e. disability) or premature mortality, both of which are included in this analysis. Other indirect costs may include the value associated with caregiving (both formal and informal) or any other costs indirectly related to the health issue of concern.

The intangible costs refer to the reduced well-being, emotional distress, pain and other forms of suffering as well as premature mortality attributable to illness and injury that are more difficult to derive. This reduction in health status must be measured and then valued using utility-based methods, or in dollar terms. Utility-based measures combine quantity and quality of life into health-adjusted life measures such as QALYs, HALYs or DALYs. Methods such as the willingness-to-pay approach or the well-being approach can be used to derive monetary valuations of these changes in life status.

As noted, the Global Burden of Disease project focusses on all types of disease and illness and provides a valid way of comparing across disease groups, including comparisons to and among communicable diseases, using DALYs as its outcome measure. In Ontario, researchers conducted a study of the burden of infectious diseases on population health Footnote 4. This study focused on 51 infectious diseases and associated syndromes, and derived the HALYs associated with these. The study found that hepatitis C represented the greatest burden in terms of HALYs. Others included HIV, foodborne diseases (e.g. Escherichia coli) and Clostridium difficile. However, due to different methodologies it is difficult to compare the results of these studies.

Most cost-of-illness studies have focussed on a particular disease or illness, such as that of HIV/AIDS in Canada Footnote 5Footnote 6. This lack of a comprehensive study on the overall economic burden of communicable diseases reduces the comparability of results across studies and diseases. Studies have also used different methodologies (e.g., prevalence- vs incidence-based), different cost components, and different measurement and valuation techniques. This ultimately limits the overall use of such results.

The Economic Burden of Illness in Canada (EBIC) database provides objective and comparable information on the cost-of-illness and injury in Canada across 24 diagnostic categories Footnote 7. These categories are based on the International Classification of Diseases (ICD) codes and are described in Appendix C of the EBIC 2005-2008 report. In 2008, the total economic burden of illness and injury in Canada was $188.9 billion, with the direct costs accounting for 91% ($172.0 billion) and the indirect costs for 9% ($16.9 billion) of the total costs of illness. However, only 50% of the total economic burden of illness and injury or $94.5 billion of the $188.9 billion, of all costs could be allocated by diagnostic category. As a result, the costs associated with each diagnostic category will be an underestimation of the actual costs. The overall distribution, however, of expenditures is unlikely to be significantly affected. Hence, much of this analysis will focus on the percentage of costs in relation to all allocated expenditures.

The objective of this paper was to derive the economic burden of illness associated with communicable diseases in Canada and to examine the hospital costs according to socioeconomic status in order to derive the costs associated with inequalities related to the use of the health care system. This analysis used data from the Economic Burden of Illness in Canada, 2005-2008 Footnote 7.

The data used in this analysis were all derived from the Economic Burden of Illness in Canada, 2005-2008 (EBIC) Footnote 7. EBIC uses a prevalence-based approach to estimate the costs associated with illness and injury over a one-year period. A prevalence-based cost-of-illness study estimates the total cost of a disease incurred in a given year regardless of the date of disease onset.

The EBIC database uses a top-down approach to allocate the direct costs Footnote 7. The top-down method uses actual expenditure data, such as total hospital expenditures, to allocate the expenditures across all diagnostic categories using a utilization key. One of the benefits of using a top-down approach is that all expenditures are allocated to different disease groups in a mutually exclusive manner, avoiding any possible double counting. A detailed explanation of data sources has already been published Footnote 7. The most recent year of available data is from 2008.

In order to examine differences across socioeconomic groups in health care expenditures data, it is necessary to have data on income quintile that can also be allocated by diagnostic category. Income quintile information was only available for the majority of hospital expenditures and was derived using Statistics Canada's Postal Code Conversion File Plus (PCCF+) program. This program uses postal codes to assign socioeconomic and demographic data, including income level, by geographic area. In 2008, the top income quintile represented households (minimum two people) with an income greater than $122,500, while the lowest quintile represented households whose income was below $39,300. The minimum incomes required for Quintiles 3 and 4 were $61,400 and $86,100, respectively Footnote 10.

Respiratory infections were responsible for over $2.8 billion in indirect costs, with the common cold and influenza costing society $1.4 billion and $1 billion, respectively, in lost production. While the costs related to mortality were relatively low, pneumonia, HIV/AIDS, and hepatitis B accounted for over 70% of mortality costs.

In 2008, the economic burden of illness in Canada for communicable diseases was $8.3 billion or 9% of the total economic burden of illness in Canada. Communicable diseases were responsible for 6% of all direct costs and 34% of all indirect costs, signifying the importance of disability associated with such diseases as HIV and hepatitis. In addition, the finding showed a clear cost to income gradient for hospital costs representing inequalities associated with the burden of such diseases; the gradient was much greater for communicable diseases than non-communicable diseases. For communicable diseases, costs for individuals in the lowest income quintile were 73% higher than those for in the highest income quintile. The majority of costs associated with communicable diseases were attributed to respiratory infection, specifically influenza and the common cold. These were responsible for 56% of the direct costs but 77% of the indirect costs. The results showing a socioeconomic gradient related to hospital expenditures are consistent with previous research reporting on the relationship between socioeconomic status and the need for and utilization of health care resources Footnote 8Footnote 9. Given the aggregate data used, it is not possible to assume a causal relationship between income and health status, but other evidence suggests that the directional relationship is generally from income to health and not vice versa Footnote 11Footnote 12Footnote 13.

A second limitation is that the direct and indirect costs included in this analysis were not complete as many of the costs associated with illness, both direct and indirect, could not be properly allocated to a specific disease. This included a portion of the hospital, drug and physician costs; some whole categories have been excluded, such as spending on public health. With respect to the inequality analysis, some important components were excluded, such as out-of-pocket expenditures and expenditures for primary care, drugs and non-insured services. Such expenditures may serve as substitutes for hospital services and their inclusion would have provided a better picture of the inequalities.

In addition, lost production due to "presenteeism" was excluded from the analysis. "Presenteeism" refers to the concept when people go to work but work at a level of productivity of less than 100% due to illness. This may be a significant concern in relation to infectious diseases where people may be less likely to take time off work but show up at a reduced level of productivity. Furthermore, infected individuals showing up for work will likely increase the spread of infection, ultimately impacting many people in their organization.

A third limitation of this study relates to issues of diagnoses, comorbidities and the exclusion of sequelae associated with communicable diseases. The direct costs were all allocated to primary diagnoses and thus could not take into account all the impacts that communicable diseases had on expenditures. For example, many hospitalizations or deaths due to influenza are not diagnosed as such; many infectious diseases have multiple chronic sequelae such as cancer, liver diseases and infertility; large proportions of asymptomatic infections may be inaccurately attributed to non-infectious chronic diseases in mortality or even in morbidity data.

The impact of all these limitations is an underestimation of the true total costs associated with communicable diseases. As such, the findings of this study can be considered to be conservative.

The authors also wish to thank two anonymous referees for their valuable comments on an earlier draft of this paper. This paper represents the views of the authors and any remaining errors are their own.

Kingtson-Reichers J. The economic costs of HIV/AIDS in Canada. Ottawa (ON): The Canadian AIDS Society; 2011.

Phipps S. The Impact of poverty on health: a scan of research literature. Ottawa (ON): Canadian Institute for Health Information; 2003.