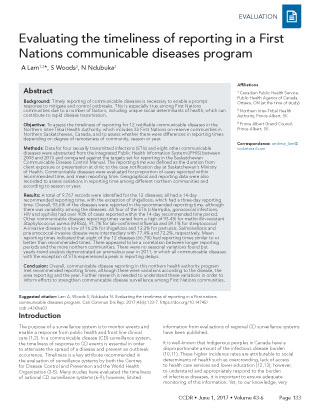 Background: Timely reporting of communicable diseases is necessary to enable a prompt response to mitigate and control outbreaks. This is especially true among First Nations communities due to a number of factors, including unique social determinants of health, which can contribute to rapid disease transmission.

Objective: To assess the timeliness of reporting for 12 notifiable communicable diseases in the Northern Inter-Tribal Health Authority, which includes 33 First Nations on-reserve communities in Northern Saskatchewan, Canada, and to assess whether there were differences in reporting times depending on degree of remoteness of community, season or year.

Methods: Data for four sexually transmitted infections (STIs) and eight other communicable diseases were abstracted from the integrated Public Health Information System (iPHIS) between 2008 and 2013 and compared against the targets set for reporting in the Saskatchewan Communicable Disease Control Manual. The reporting time was defined as the duration from client exposure or presentation at clinic to the case notification day at Saskatchewans Ministry of Health. Communicable diseases were evaluated for proportion of cases reported within recommended time, and mean reporting time. Geographical and reporting data were also recorded to assess variations in reporting time among different northern communities and according to season or year.

Results: A total of 9,767 records were identified for the 12 diseases; all had a 14-day recommended reporting time, with the exception of shigellosis, which had a three-day reporting time. Overall, 93.6% of the diseases were reported in the recommended reporting time, although there was variability among the diseases. All four of the STIs (chlamydia, gonococcal infections, HIV and syphilis) had over 90% of cases reported within the 14-day recommended time period. Other communicable diseases reporting times varied from a high of 93.4% for methicillin-resistant Staphylococcus aureus (MRSA), 91.7% for lab-confirmed influenza and 89.1% for streptococcal A-invasive disease to a low of 16.2% for shigellosis and 12.2% for pertussis. Salmonellosis and pneumococcal-invasive disease were intermediary with 77.4% and 72.2%, respectively. Mean reporting times indicated that eight of the 12 diseases (66.7%) had reporting times similar to or better than recommended times. There appeared to be a correlation between longer reporting periods and the more northern communities. There were no seasonal variations found but yearly-trend analysis demonstrated an anomalous year in 2011, in which all communicable diseases with the exception of STIs experienced a peak in reporting delays.

It is well-known that Indigenous peoples in Canada have a disproportionate amount of the infectious disease burden Footnote 10Footnote 11. These higher incidence rates are attributable to social determinants of health such as overcrowding, lack of access to health care services and lower education Footnote 12Footnote 13; however, to understand and appropriately respond to the burden of infectious diseases, it is important to ensure adequate monitoring of this information. Yet, to our knowledge, very little has been published on CD surveillance systems among Indigenous peoples in Canada.

Clinicians, within communities or off-reserve, collect and submit specimens to the Saskatchewan Disease Control Laboratory (SDCL) for laboratory confirmation of the CD. Laboratory results are sent to the Regional Health Authorities, which send the results to the specific regional health organizations. So if the client is a resident from a community within NITHAs coverage, the results would be sent to NITHA. NITHA is then responsible for connecting with frontline community health staff for client follow-up. NITHA reports both laboratory and follow-up information to Saskatchewans Population Health Branch using the integrated Public Health Information System (iPHIS).

In light of the disproportionate CD burden among First Nations communities, and the lack of research evaluating regional CD surveillance, the objective of this study was to identify the timeliness of CD reporting by NITHA to Saskatchewans Population Health Branch and assess whether there were differences in reporting times by remoteness of community, season or year.

Line listing data from iPHIS for the CDs under study included two dates for each CD: episode date and diagnosis date for STIs; and episode date and laboratory reported date for the other CDs. Reporting time was defined as the number of days from the episode/encounter in the clinic to the diagnosis/laboratory-reported date. This interval indicated the duration of time between the client presentation at the health facilities, where the specimen was collected, and the time when the result was reported by NITHA to Saskatchewans Population Health Branch through iPHIS.

Geography and trends over time

Line listing data from iPHIS included names of 33 First Nations on-reserve communities in Northern Saskatchewan, Canada. The communities were clustered into five councils and geographical areas for analysis: Prince Albert Grand Council; Meadow Lake Tribal Council; Peter Ballantyne Cree Nation; Lac La Ronge Indian Band; and the most northern NITHA communities. Trends over time by season and year were assessed by assigning the season or year of the case by the episode/encounter date.

The comparator to assess the reporting time was the Saskatchewan CD Control Manual recommended time limit for each of the 12 CDs Footnote 16; all had a 14-day recommended reporting time, with the exception of shigellosis that had a three day reporting time. Timeliness was analyzed by calculating: a) the proportion of cases that were reported within the recommended time limit; and b) the mean reporting time between the two dates. Confidence intervals with an alpha of 0.05 were calculated, where available. Analyses were performed using Microsoft Office Excel 2010 and statistical software R Footnote 17. Only diseases that had more than 30 cases during the observed time period were included in the disease-specific analyses. Yearly reporting time trend analyses were conducted for the total group of STIs and other CDs to account for sample size limitations of individual disease analyses.

Among the twelve diseases, a total of 9,767 records were identified and 93.6% of the diseases were reported in the recommended reporting time (Table 1). C. trachomatis, MRSA, and gonococcal infections were the most prevalent diseases, constituting 51.1%, 23.2% and 16.8% of the identified cases respectively. All STIs (chlamydia, gonococcal infections, HIV and syphilis) had over 90% of cases reported within the recommended time period; C. trachomatis was reported on time for 96.9% of cases, HIV for 97.5% of cases, gonococcal infections for 95.8% of cases and syphilis for 90.7% of cases. MRSA and lab-confirmed influenza also had a high proportion of cases reported on time: 93.4% and 91.7%, respectively. The two CDs with the lowest proportion of cases reported on time were pertussis, at 12.2%, and shigellosis, at 16.2% (shigellosis was the only CD with a recommended three day reporting period). The remaining CDs were reported on time for 70-90% of cases; these included hepatitis C, pneumococcal-invasive disease, salmonellosis and streptococcal A-invasive disease.

The annual mean reporting times of STIs and other CDs were evaluated to observe annual trends (Figure 1). STIs had a recommended reporting time of 14 days, and were consistently reported to the Saskatchewan Population Health Branch in fewer than 10 days. Between 2008 and 2013, there was a downward trend in reporting timeliness for STIs. The reporting of other CDs was within the recommended time, with the exception of the year 2011, when cases took an average 11.7-15.2 days (95% confidence interval) to be reported. The overall trends for both groups of other CDs and of all CDs combined were downward sloping between 2008 and 2013, as was seen with STIs.

Data for STIs and other CDs from each of the four seasons were analyzed to observe seasonal trends. There were no differences of mean reporting times between or within any group of CDs throughout the four seasons (Figure 2).

Based on almost 10,000 records from First Nations communities over a six-year period, NITHA was successful in reporting 93.6% of common CDs within the recommended reporting time, although there was some variation among the different diseases. Pertussis and shigellosis were reported least frequently within the recommended time. Pertussis and shigellosis may have had delayed reporting due to clusters and outbreaks of these two diseases, which strained public health resources and prolonged reporting Footnote 18. The relatively small number of records for these two diseases also implies that a delay of a few cases can drastically reduce the proportion of timely reported incidents. There was no significant seasonal variation and reporting times were generally getting shorter over the time period of the study. One exception to this was the increased reporting times seen in 2011. This occurred at the time of a shigellosis outbreak, which may have strained public health capacity and created an overall delay in the CD program Footnote 19. In terms of geographical analysis, the northernmost communities had slightly longer reporting periods than those communities closer to Regina, Saskatchewan.

There are some limitations to the study. First, there were an insufficient number of records for many CDs. This uncontrollable phenomenon prevented meaningful statistical analyses from being conducted, such as evaluating disease-specific yearly trends. Additionally, data collected from iPHIS only displayed two unique dates for most entries. This system limitation prevented evaluation at individual steps of the surveillance program. For instance, other common steps to evaluate would have been time between exposure and diagnosis, time between patient encounter and laboratory confirmation and time between laboratory confirmation and reporting to the appropriate health unit Footnote 5Footnote 8. Finally, timeliness is just one aspect of evaluation of a surveillance system, and other indicators, such as internal completeness, internal and external validity and usefulness are other aspects that are often assessed Footnote 21.

In terms of next steps, this evaluation has shown that CD reporting does vary by disease, year and remoteness of the community. This evaluation does not explain why the variance occurs. Future investigations may help to explain this by analyzing with increased sample sizes or by conducting qualitative studies to understand reporting mechanisms; for example, the current system uses paper reporting forms whereas an electronic system may be beneficial in achieving a more consistent timely reporting rate Footnote 6. Finally, cumulative delay distribution graphs may also be valuable for future analyses Footnote 7.

The communicable disease program at NITHA successfully reported 93.6% of all collected communicable disease cases to the Saskatchewan Population Health Branch in a timely manner, although there were variations according to the disease, year and remoteness. The reporting times for specific diseases, such as shigellosis, syphilis, hepatitis C, and pneumococcal-invasive disease, could be improved to consistently achieve timely reporting.

The views expressed in this article are the authors own and not an official position of any affiliated organization.

We thank the community staff and Northern Inter-Tribal Health Authority employees who have helped in collecting and reporting this data.

This work was supported by the Public Health Agency of Canada and the Northern Inter-Tribal Health Authority.