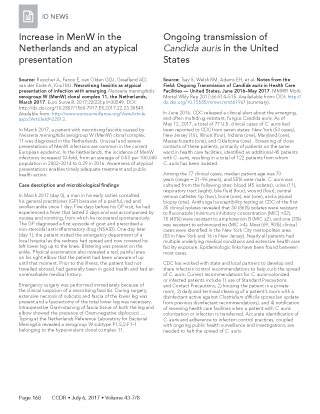 Increase in MenW in the Netherlands and an atypical presentation

In March 2017, a patient with necrotising fasciitis caused by Neisseria meningitidis serogroup W (MenW) clonal complex 11 was diagnosed in the Netherlands. Unusual and severe presentations of MenW infections are common in the current European epidemic. In the Netherlands, the incidence of MenW infections increased 10-fold, from an average of 0.03 per 100,000 population in 2002-2014 to 0.29 in 2016. Awareness of atypical presentations enables timely adequate treatment and public health action.

In March 2017 (day 0), a man in his early sixties consulted his general practitioner (GP) because of a painful, red and swollen ankle since 1 day. Five days before his GP visit, he had experienced a fever that lasted 2 days and was accompanied by nausea and vomiting, from which he recovered spontaneously. The GP diagnosed a first episode of gout and prescribed a non-steroidal anti-inflammatory drug (NSAID). One day later (day 1), the patient visited the emergency department of a local hospital as the redness had spread and now covered his left lower leg up to the knee. Blistering was present on the ankle. Physical examination also revealed a red, painful area on his right elbow that the patient had been unaware of up until that moment. Prior to this illness, the patient had not travelled abroad, had generally been in good health and had an unremarkable medical history.

Emergency surgery was performed immediately because of the clinical suspicion of a necrotising fasciitis. During surgery, extensive necrosis of subcutis and fascia of the lower leg was present and a fasciectomy of the total lower leg was necessary. Intraoperative Gram-staining of fascia tissue of both the leg and elbow showed the presence of Gram-negative diplococci … Typing at the Netherlands Reference Laboratory for Bacterial Meningitis revealed a serogroup W subtype P1.5,2:F1-1 belonging to the hypervirulent clonal complex 11.

Ongoing transmission of Candida auris in the United States

In June 2016, CDC released a clinical alert about the emerging, and often multidrug-resistant, fungus Candida auris. As of May 12, 2017, a total of 77 U.S. clinical cases of C. auris had been reported to CDC from seven states: New York (53 cases), New Jersey (16), Illinois (four), Indiana (one), Maryland (one), Massachusetts (one), and Oklahoma (one) . Screening of close contacts of these patients, primarily of patients on the same ward in health care facilities, identified an additional 45 patients with C. auris, resulting in a total of 122 patients from whom C. auris has been isolated.

Among the 77 clinical cases, median patient age was 70 years (range = 21-96 years), and 55% were male. C. auris was cultured from the following sites: blood (45 isolates), urine (11), respiratory tract (eight), bile fluid (four), wound (four), central venous catheter tip (two), bone (one), ear (one), and a jejunal biopsy (one). Antifungal susceptibility testing at CDC of the first 35 clinical isolates revealed that 30 (86%) isolates were resistant to fluconazole (minimum inhibitory concentration [MIC] >32), 15 (43%) were resistant to amphotericin B (MIC ≥2), and one (3%) was resistant to echinocandins (MIC >4). Most (69, 90%) clinical cases were identified in the New York City metropolitan area (53 in New York and 16 in New Jersey). Nearly all patients had multiple underlying medical conditions and extensive health care facility exposure. Epidemiologic links have been found between most cases.

CDC has worked with state and local partners to develop and share infection control recommendations to help curb the spread of C. auris. Current recommendations for C. auris-colonized or infected patients include 1) use of Standard Precautions and Contact Precautions, 2) housing the patient in a private room, 3) daily and terminal cleaning of a patient's room with a disinfectant active against Clostridium difficile spores (an update from previous disinfectant recommendations), and 4) notification of receiving health care facilities when a patient with C. auris colonization or infection is transferred. Accurate identification of C. auris and adherence to infection control practices, coupled with ongoing public health surveillance and investigations, are needed to halt the spread of C. auris.