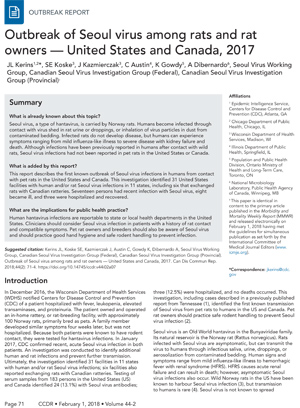 Outbreak of Seoul virus among rats and rat owners - United States and Canada, 2017

Seoul virus, a type of hantavirus, is carried by Norway rats. Humans become infected through contact with virus shed in rat urine or droppings, or inhalation of virus particles in dust from contaminated bedding. Infected rats do not develop disease, but humans can experience symptoms ranging from mild influenza-like illness to severe disease with kidney failure and death. Although infections have been previously reported in humans after contact with wild rats, Seoul virus infections had not been reported in pet rats in the United States or Canada.

This report describes the first known outbreak of Seoul virus infections in humans from contact with pet rats in the United States and Canada. This investigation identified 31 United States facilities with human and/or rat Seoul virus infections in 11 states, including six that exchanged rats with Canadian ratteries. Seventeen persons had recent infection with Seoul virus, eight became ill, and three were hospitalized and recovered.

Human hantavirus infections are reportable to state or local health departments in the United States. Clinicians should consider Seoul virus infection in patients with a history of rat contact and compatible symptoms. Pet rat owners and breeders should also be aware of Seoul virus and should practice good hand hygiene and safe rodent handling to prevent infection.

In December 2016, the Wisconsin Department of Health Services (WDHS) notified Centers for Disease Control and Prevention (CDC) of a patient hospitalized with fever, leukopenia, elevated transaminases, and proteinuria. The patient owned and operated an in-home rattery, or rat-breeding facility, with approximately 100 Norway rats, primarily bred as pets. A family member developed similar symptoms four weeks later, but was not hospitalized. Because both patients were known to have rodent contact, they were tested for hantavirus infections. In January 2017, CDC confirmed recent, acute Seoul virus infection in both patients. An investigation was conducted to identify additional human and rat infections and prevent further transmission. Ultimately, the investigation identified 31 facilities in 11 states with human and/or rat Seoul virus infections; six facilities also reported exchanging rats with Canadian ratteries. Testing of serum samples from 183 persons in the United States (US) and Canada identified 24 (13.1%) with Seoul virus antibodies; three (12.5%) were hospitalized, and no deaths occurred. This investigation, including cases described in a previously published report from TennesseeFootnote 1 identified the first known transmission of Seoul virus from pet rats to humans in the United States and Canada. Pet rat owners should practice safe rodent handling to prevent Seoul virus infectionFootnote 2.

Seoul virus is an Old World hantavirus in the Bunyaviridae family. Its natural reservoir is the Norway rat (Rattus norvegicus). Rats infected with Seoul virus are asymptomatic, but can transmit the virus to humans through infectious saliva, urine, droppings, or aerosolization from contaminated bedding. Human signs and symptoms range from mild influenza-like illness to hemorrhagic fever with renal syndrome (HFRS). HFRS causes acute renal failure and can result in death; however, asymptomatic Seoul virus infections also occur. Wild Norway rats in the United States have been known to harbour Seoul virus infectionFootnote 3 but transmission to humans is rareFootnote 4. Seoul virus is not known to spread from person to person. In the United Kingdom, Seoul virus transmission has occurred from pet rats to humansFootnote 5 but before this outbreak, infections had not been reported in pet rats in the United States or Canada.

A suspected human case of Seoul virus infection was defined as a febrile illness (recorded temperature >101°F [38.3°C] or subjective history of fever) or an illness clinically compatible with Seoul virus infection (myalgia, headache, renal failure, conjunctival redness, thrombocytopenia, or proteinuria) without laboratory confirmation in a person reporting contact with rats from a confirmed or suspected facility. Human Seoul virus infections were laboratory-confirmed by detection of Seoul virus-specific immunoglobulin M (IgM) and/or immunoglobulin G (IgG)Footnote 6 antibodies by enzyme-linked immunosorbent assay (ELISA). In the US, Seoul virus infections in rats were confirmed through detection of viral RNA by reverse transcription–polymerase chain reaction (RT-PCR) and/or IgG ELISA at CDC, or by CDC-validated commercial IgG testing. In Canada, public health officials investigated rat breeding facilities that exported rats to and imported rats from affected US facilities. Seoul virus infection was detected in Canadian rats from breeding facilities using the same serologic and molecular-based protocols described for US facilities.

By March 16, 2017, trace-forward and trace-back investigations identified approximately 100 suspected facilities in 21 states. Among these, 31 facilities in 11 states had laboratory-confirmed human or rat infections, including a previously reported household in Tennessee with two confirmed human infectionsFootnote 1. Six confirmed facilities in six states (Georgia, Illinois, Missouri, South Carolina, Tennessee, and Utah) reported exchanging rats with Canadian ratteries during their trace-forward and trace-back investigations. A total of 163 persons in the US and 20 in Canada consented to serologic testing; 17 (10.4%) US residents and one (5.0%) Canadian resident had detectable IgM and IgG antibodies, indicating recent infection, and four (2.5%) US residents and two (10.0%) Canadian residents had only IgG antibodies, indicating past or convalescent infection. Among the 17 US patients with recent Seoul virus infection, eight reported recent febrile illness. Three were hospitalized, but did not develop HFRS, and all recovered. Serious illness was not reported in any Canadian patients. All strains detected in Canada and the US were indistinguishable from one another based on nucleotide sequencingFootnote 7 indicating that a single strain was responsible for the outbreak. No single facility was identified as the origin of the outbreak.

On January 24, CDC issued a Health Alert Notice to notify health departments and health care providers of the Seoul virus investigations. On February 10, the World Health Organization was notified of the US and Canadian infections and investigations as required by International Health Regulations. On January 31 and May 9, 2017, CDC and the Pet Industry Joint Advisory Council hosted calls to provide updates on the Seoul virus outbreak and to answer questions for the pet industry and fancy rat community. The CDC created a website with Seoul virus facts and frequently asked questions for the public.

Health departments notified suspected and confirmed facilities, and placed those facilities under quarantine, allowing no rats to enter or leave. Rat contact was limited to as few persons as possible to reduce transmission. In suspected facilities, CDC recommended rat testing be performed under the supervision of a public health official or licensed veterinarian. The quarantine was lifted when at least four weeks had elapsed since the newest animal was introduced, and all rats subsequently tested negative. Rats belonging to owners who refused to test their animals could remain quarantined for life or be euthanized. The CDC recommended euthanasia of all rats in confirmed facilities as the most effective method to prevent transmission, although control recommendations differed by state and country according to local policies and response capacities. If euthanasia was not possible, then owners could either quarantine all rats for life or pursue quarantine with testing and culling. The testing and culling strategy entailed testing all rats and euthanizing only infected rats. Testing and euthanasia were repeated at four week intervals until all rats tested negative and the quarantine was lifted. In Canada, public health officials opted for education and a voluntary testing and culling approach to control Seoul virus transmission.

This outbreak report, in parallel to the previously described investigation in TennesseeFootnote 1 describes the first known cases of Seoul virus infection in humans attributable to contact with pet rats in the US and Canada. Human hantavirus infections are nationally notifiable in the US and suspected cases should be reported to state or local health departments. Health care providers should consider Seoul virus infection in patients with febrile illness who report rat exposure; CDC recommends testing for any person with compatible illness and rodent contact. Testing is available at CDC and through some state and commercial laboratories. In Canada, testing is available for symptomatic persons with rat exposure, rattery owners associated with this investigation, and their rats through public health laboratories; for individually owned pet rats and ratteries not associated with the investigation, testing is available through a commercial laboratory.

Pet rat owners should be aware of the potential for Seoul virus infection. To keep themselves and their pets healthy, all persons with rodent contact should avoid bites or scratches and practice good hand hygiene, especially children and persons with compromised immune systemsFootnote 2. The CDC recommends hand washing after caring for rodents and before eating, drinking, or preparing foodFootnote 2. If a pet rat is suspected of having Seoul virus, the person cleaning the rodent environment should wear a respirator, gloves, and cover any scratches or open woundsFootnote 8. An adult should routinely disinfect rat cages and accessories, including used bedding, with a 10% bleach solution or a commercial disinfectantFootnote 8. More information about rodent contact and disease prevention is available from CDCFootnote 8Footnote 9.

Rattery owners are encouraged to quarantine any newly acquired rats for four weeks and to test these rats for Seoul virus antibodies before allowing them to comingle with other rats. Commercial laboratories can perform Seoul virus testing of rodent blood samples, and comparisons of results from shared samples have been concordant with CDC's ELISA and RT-PCR assays. To prevent transmission to humans, CDC recommends euthanasia of all rats in facilities with human or rat Seoul virus infections. Further guidance on methods to eradicate Seoul virus from infected ratteries should be obtained from local or state health departments.

No conflicts of interest were reported.