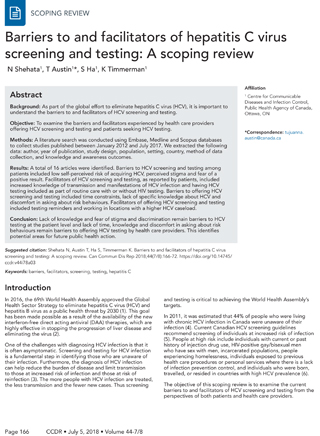 Barriers to and facilitators of hepatitis C virus screening and testing: A scoping review

Background: As part of the global effort to eliminate hepatitis C virus (HCV), it is important to understand the barriers to and facilitators of HCV screening and testing.

In 2016, the 69th World Health Assembly approved the Global Health Sector Strategy to eliminate hepatitis C virus (HCV) and hepatitis B virus as a public health threat by 2030Footnote 1. This goal has been made possible as a result of the availability of the new interferon-free direct acting antiviral (DAA) therapies, which are highly effective in stopping the progression of liver disease and eliminating the virusFootnote 2.

In 2011, it was estimated that 44% of people who were living with chronic HCV infection in Canada were unaware of their infectionFootnote 4. Current Canadian HCV screening guidelines recommend screening of individuals at increased risk of infectionFootnote 5. People at high risk include individuals with current or past history of injection drug use, HIV-positive gay/bisexual men who have sex with men, incarcerated populations, people experiencing homelessness, individuals exposed to previous health care procedures or personal services where there is a lack of infection prevention control, and individuals who were born, travelled, or resided in countries with high HCV prevalenceFootnote 6.

The objective of this scoping review is to examine the current barriers to and facilitators of HCV screening and testing from the perspectives of both patients and health care providers.

We conducted a literature search for studies published between January 2012 and July 2017 to capture the most recent studies in the changing landscape of HCV screening and testing. We searched Embase, Medline and Scopus using the search terms “hepatitis C” or “HCV” and “screen” or “test” and “barriers” or “facilitators.” (Search strategy available upon request)

Studies were included if they were published between January 2012 and July 2017; published in English or French; focused on populations other than people who inject drugs; and conducted in well-resourced countries. Letters to the editors, narrative reviews and commentaries were excluded. Key populations were not determined a priori but rather emerged from the results of the search.

Once the articles were identified, title and abstracts were screened for relevance. We extracted data on the study population, location of study, study design, outcomes and results.

Of the 126 articles identified in the search, 16 studies focused on the barriers to and facilitators of HCV screening and testing (Figure 1).

Lengthy counselling procedures also emerged as a barrier to health care providers offering HCV testing. In a study conducted in an American teaching hospital, 75% of patients in a hospital setting were not screened because the medical resident circumvented the screening processFootnote 21.

Most health care providers understand the importance of addressing risk factors and diagnosing HCV; however, many reported difficulties in raising the subject with their patientsFootnote 9. This was especially true if the patient did not have regular contact with the provider and patient–provider rapport was limited. Providers reported that they were more comfortable offering testing after they had built a rapport with their patient and had learned about patients’ history and risk factorsFootnote 8.

Lack of knowledge about HCV including risk factors, routes of transmission, manifestations and outcomes of untreated infection were frequently reported as barriers to patients seeking HCV testing. Knowledge gaps are evident among patients of all levels of risk. In addition, HIV/HCV stakeholders believed that health care providers’ reluctance to discuss HCV contributed to youth and adults’ reluctance to seek or discuss testingFootnote 18.

Lack of knowledge about HCV leads to low self-perceived risk of infection, which in turn leads to under- and undiagnosed cases of HCV infection. Patients frequently reported not being at risk for HCV infection or not having any risk factorsFootnote 11Footnote 15Footnote 19. Moreover, patients who had had a previous HCV test were more likely to not seek testing againFootnote 19.

In a Canadian qualitative study, youth and adult HIV/HCV-prevention stakeholders reported that stigmatizing perceptions and negative attitudes about HIV/HCV persist and are a significant barrier to patients seeking testingFootnote 18. Other studies have also reported patients—particularly immigrant and migrant populations—fearing a positive HCV diagnosis and the associated stigma and discrimination as barriers to HCV screeningFootnote 19Footnote 20Footnote 22.

Limited interactions with the health care system, lack of a primary care provider and an unstable socioeconomic status were all identified in the literature as barriers to HCV testing reported by patients. Adults born between 1945 and 1965 have reported cost of testing, lack of health insurance, limited access to hepatology clinics and long wait times for appointments as barriers to HCV screeningFootnote 13Footnote 19. Language barriers and lack of culturally sensitive health services limit migrant populations’ access to HCV testingFootnote 20Footnote 22Footnote 23.

Awareness and knowledge of risk factors

Awareness and knowledge of HCV risk factors can help health care providers facilitate HCV screening and testing. In a study conducted by McLeod et al. (2017) in Scotland, general practitioners reported almost always offering an HCV test to patients with abnormal liver function test results when they are aware of the risk factorsFootnote 11.

A common facilitator of offering HCV screening and testing were reminders. Such reminders could decrease missed opportunities for testing. Health care providers mentioned computerized prompts built into EMRs, based on the patient’s health history and risk factors, as a method of being remindedFootnote 8Footnote 9. This could help ensure that patients who had not been previously offered a test or who had previously declined a test not miss other opportunities for testing. Although one study described “electronic medical record flag fatigue” (where health care providers receive too many reminders)Footnote 10 other studies noted health care providers’ forgetfulness as a barrier to screening and suggest EMR flags as a solutionFootnote 8.

A key facilitator of seeking HCV testing is awareness and knowledge of HCV.

Table 1 summarizes the key barriers to and facilitators of HCV screening and testing. Details of the included studies are shown in Appendix 1.

This scoping review presents a high-level snapshot of the barriers to and facilitators of health care providers offering HCV screening and testing and of patients seeking HCV testing. Barriers experienced by health care providers included time constraints, lack of specific knowledge about HCV and lack of comfort discussing HCV. Common barriers for patients were: lack of knowledge, low perceived risk of infection, fear of a positive diagnosis, stigma and discrimination, and limited access to the health care system. Facilitators for health care providers to screen were: electronic medical record flags and awareness and knowledge of HCV. Facilitators for patients to request screening were: awareness and knowledge of HCV. Given the estimated prevalence of undiagnosed cases of HCV infection, results of this scoping review are important for raising awareness of factors that facilitate and hinder HCV testing.

This review has two limitations. First, as a result of the variation in time and place of the studies, some refer to first-generation DAAs, while others refer to second generation DAAs. Although the review focused on barriers to and facilitators of HCV testing, it is important to note the treatment landscape when interpreting findings, particularly considering that some barriers (i.e., cost of treatment, fear of a positive result) may be linked to the availability of treatment.

The results from this review align with previous research and add to the literature on HCV screening and testing, particularly the barriers and facilitators. A strength of this review is the focus on populations other than injection drug users, including other at-risk populations (i.e., migrants, and sex workers), as well as the general public. Future research could include assessing the barriers to and facilitators of hepatitis C testing in special populations (e.g., Indigenous communities, remote/isolated regions) where the diagnostic and treatment environments of testing are unique.

Understanding the barriers to and facilitators of HCV screening and testing can inform public health actions to improve risk-based screening and reduce the number of individuals unaware of their HCV infection. Informed patients and health care providers who are given the means to address stigma and discomfort around HCV could help advance the goal of HCV eradication.

We would like to thank Dr. Margaret Gale-Rowe, Dr. Jun Wu and Margaret Bodie for their contributions to the revision of this manuscript and Audréanne Garand for her support in the data curation and initial analysis.