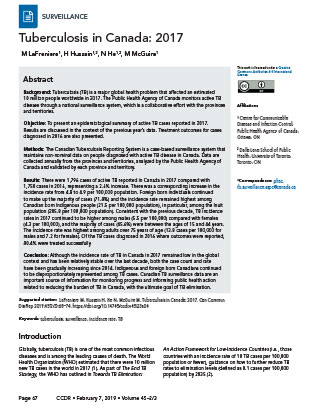 Background: Tuberculosis (TB) is a major global health problem that affected an estimated 10 million people worldwide in 2017. The Public Health Agency of Canada monitors active TB disease through a national surveillance system, which is a collaborative effort with the provinces and territories.

Objective: To present an epidemiological summary of active TB cases reported in 2017. Results are discussed in the context of the previous year’s data. Treatment outcomes for cases diagnosed in 2016 are also presented.

Methods: The Canadian Tuberculosis Reporting System is a case-based surveillance system that maintains non-nominal data on people diagnosed with active TB disease in Canada. Data are collected annually from the provinces and territories, analyzed by the Public Health Agency of Canada and validated by each province and territory.

Conclusion: Although the incidence rate of TB in Canada in 2017 remained low in the global context and has been relatively stable over the last decade, both the case count and rate have been gradually increasing since 2014. Indigenous and foreign born Canadians continued to be disproportionately represented among TB cases. Canadian TB surveillance data are an important source of information for monitoring progress and informing public health action related to reducing the burden of TB in Canada, with the ultimate goal of TB elimination.

Globally, tuberculosis (TB) is one of the most common infectious diseases and is among the leading causes of death. The World Health Organization (WHO) estimated that there were 10 million new TB cases in the world in 2017Footnote 1. As part of The End TB Strategy, the WHO has outlined in Towards TB Elimination: An Action Framework for Low-Incidence Countries (i.e., those countries with an incidence rate of 10 TB cases per 100,000 population or fewer), guidance on how to further reduce TB rates to elimination levels (defined as 0.1 cases per 100,000 population) by 2035Footnote 2.

While Canada is a low TB incidence country, TB incidence rates are consistently higher than the low incidence cut-off in certain subpopulations in the country: namely, foreign born and Indigenous CanadiansFootnote 3. A high level of TB activity in Canada’s north has been observed for many years, especially among the InuitFootnote 3Footnote 4. Tuberculosis among foreign born Canadians also represents a large burden of illness in CanadaFootnote 3. Statistics Canada has projected high growth rates in these two populations in Canada when compared with the population of Canada as a wholeFootnote 5Footnote 6, so it is especially important to diagnose and treat TB, both to address the impact of active TB disease on the affected individual and to prevent any further spread.

In Canada, national surveillance of new and re-treatment cases of active TB is conducted in partnership with all provinces and territories by the Public Health Agency of Canada (PHAC). The primary objective of the Canadian Tuberculosis Reporting System (CTBRS), Canada’s national case based surveillance system, is to monitor and report on the number of cases and on the rates of active TB in Canada. Annual reporting of TB across the country is important to better understand the epidemiology of TB in Canada over time, to inform public health action and to monitor Canada’s progress toward reducing the incidence of TB in Canada, with the ultimate goal of TB eliminationFootnote 7.

The objective of this report is to provide a descriptive overview of TB cases in Canada in 2017 by age, sex, origin, province/territory and diagnostic classification in the context of previous years’ data. Treatment outcomes for TB cases that were reported to the CTBRS in 2016 are also summarized.

The CTBRS maintains non-nominal data on people diagnosed with active TB disease in Canada. Details on the CTBRS's methods, including data collection processes, data management, data quality control and analysis, and the classification and categorization of population subgroups have been described in detail elsewhereFootnote 8. In short, provincial and territorial public health authorities voluntarily submit data on all new and re-treatment cases of active TB disease that meet the Canadian case definition for national surveillanceFootnote 8. Treatment outcome data are submitted between 12 and 18 months following the submission of the initial case report. If treatment is ongoing at the time of data submission to PHAC, the reporting jurisdiction submits an interim report followed by subsequent annual updates until the case file is closed. Updated data from previous years received after the initial submission is reflected in the most current report.

Active TB is classified as either respiratory or non-respiratory. Respiratory TB includes pulmonary TB, TB of the pleura and TB of the intrathoracic or mediastinal lymph nodes, larynx, nasopharynx, nose and sinusesFootnote 9. Primary disease is characterized by pleural effusion due to recent (i.e., within the preceding 24 months) infection with Mycobacterium tuberculosis. Non-respiratory TB refers to all other disease sites.

Original data were maintained according to PHAC’s Directive for the Collection, Use and Dissemination of Information Relating to Public Health. Data were cleaned and analyzed using SAS™ Enterprise Guide 5.1 and Microsoft™ Excel 2010. Descriptive findings are presented here. No statistical procedures were used for comparative analyses, nor were any statistical techniques applied to account for missing data. Note that in 2017, British Columbia did not submit information on Indigenous status and, therefore, cases from British Columbia were identified only as either Canadian born or foreign born. Supplementary data tables are available upon request (see Appendix for Table list).

Tuberculosis cases by sex and age

Immigration status at the time of TB diagnosis was known for 63.3% (n=816) of foreign born TB cases reported in 2017. Of these, 77.7% (n=634) were Canadian citizens or permanent residents, 9.6% (n=78) were temporary residents (including students, visitors and workers), and 5.4% (n=44) were refugees, convention refugees and refugee claimants. Immigration status was reported as ‘other’ without further details for 7.4% of cases (n=60).

TB treatment success was highest among Inuit and Métis cases, where 92.8% of Inuit cases and 88.9% of Métis cases were reportedly cured or had completed treatment. Treatment success rates were similar among First Nations (78.3%), foreign born (79.1%) and Canadian born non-Indigenous TB cases (78.0%).

Based on these surveillance data alone, it is not known why there has been an increase in the number of TB cases in Canada over the last few years, but several things may be contributing to this. The increase in both the case count and incidence rate between 2016 and 2017 reflects the increases in both the foreign born and Inuit populations during this time period. While the incidence rate of TB in the foreign born population in Canada has been stable in recent years, the case count has steadily increased. This may, in part, be explained by the overall increase in the volume of migrants to Canada in recent years. Foreign born populations in Canada with latent TB infection (not contagious) can become ill with active TB disease years after the migration process or can become infected with TB during travel back to their countries of origin. Stressful living conditions, language and cultural barriers, food and housing insecurity are all factors that can increase the likelihood of reactivating a latent TB infection after migrationFootnote 7. Increases in TB among the Inuit population are also attributable to an increased risk in this population of progressing from latent TB infection to active TB disease and to ongoing transmission of active TB, related to inequitable access to health care and the social determinants of healthFootnote 4Footnote 7. As well, advances in TB detection, diagnosis and treatment have all recently been reported in Canada’s north, which may be contributing to an increase in detection of TB cases among the InuitFootnote 4.

The limitations of the CTBRS have been described in detail previouslyFootnote 8. The CTBRS is a passive surveillance system and relies on receiving reports of active TB cases in Canada that are diagnosed by health care providers across the country and reported to provincial health authorities, and in turn, reported to PHAC. Completeness of case ascertainment and reporting delays are potential issues with this system; however, the WHO estimates that Canada's surveillance system has a case detection rate of 92%Footnote 12.

Finally, it is important to recognize that the data in this report are considered provisional and, as it continues to be updated annually, it are subject to change in future TB surveillance reports. If there are discrepancies between the data summarized in this report and provincial and territorial reports, the most recent provincial and territorial report should be used because updated national data may still be pending.

Tuberculosis surveillance data from 2017 continue to highlight well known trends in the epidemiology of TB in Canada; namely, that Indigenous and foreign born Canadians continue to be disproportionately represented among cases. Annual reporting of Canadian TB surveillance data is an important tool for informing TB prevention and control efforts and for monitoring progress on initiatives related to reducing the burden of TB in Canada, with the ultimate goal of TB elimination.

The Public Health Agency of Canada would like to acknowledge the following individuals from the provincial and territorial programs for their contribution to and participation in the CTBRS: