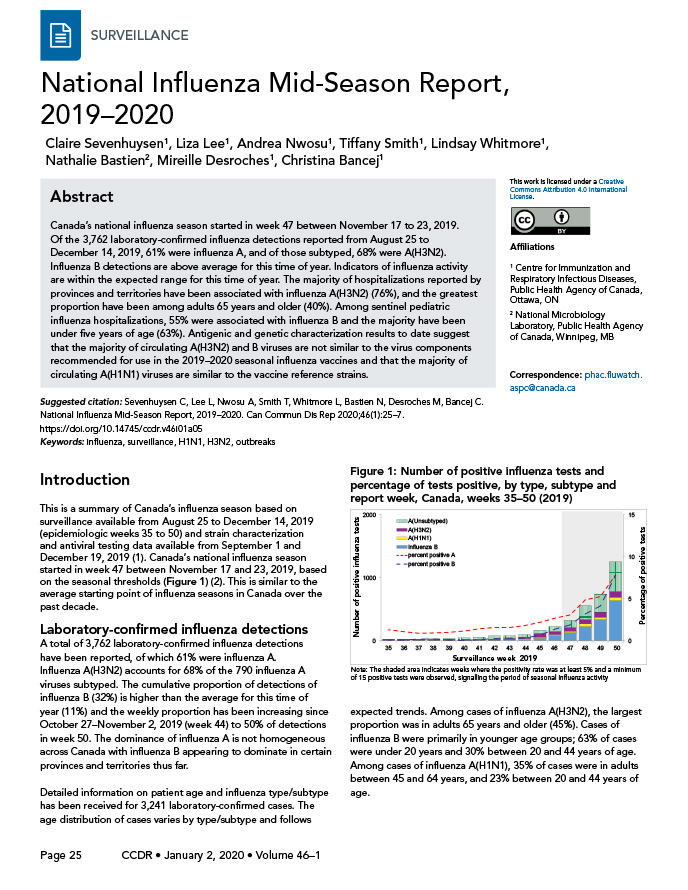 Canada’s national influenza season started in week 47 between November 17 to 23, 2019. Of the 3,762 laboratory-confirmed influenza detections reported from August 25 to December 14, 2019, 61% were influenza A, and of those subtyped, 68% were A(H3N2). Influenza B detections are above average for this time of year. Indicators of influenza activity are within the expected range for this time of year. The majority of hospitalizations reported by provinces and territories have been associated with influenza A(H3N2) (76%), and the greatest proportion have been among adults 65 years and older (40%). Among sentinel pediatric influenza hospitalizations, 55% were associated with influenza B and the majority have been under five years of age (63%). Antigenic and genetic characterization results to date suggest that the majority of circulating A(H3N2) and B viruses are not similar to the virus components recommended for use in the 2019–2020 seasonal influenza vaccines and that the majority of circulating A(H1N1) viruses are similar to the vaccine reference strains.

A total of 3,762 laboratory-confirmed influenza detections have been reported, of which 61% were influenza A. Influenza A(H3N2) accounts for 68% of the 790 influenza A viruses subtyped. The cumulative proportion of detections of influenza B (32%) is higher than the average for this time of year (11%) and the weekly proportion has been increasing since October 27–November 2, 2019 (week 44) to 50% of detections in week 50. The dominance of influenza A is not homogeneous across Canada with influenza B appearing to dominate in certain provinces and territories thus far.

Detailed information on patient age and influenza type/subtype has been received for 3,241 laboratory-confirmed cases. The age distribution of cases varies by type/subtype and follows expected trends. Among cases of influenza A(H3N2), the largest proportion was in adults 65 years and older (45%). Cases of influenza B were primarily in younger age groups; 63% of cases were under 20 years and 30% between 20 and 44 years of age. Among cases of influenza A(H1N1), 35% of cases were in adults between 45 and 64 years, and 23% between 20 and 44 years of age.

The transmissibility of influenza this season was characterized as low in week 50, which is typical for this time of year. Seasonal intensity thresholds are calculated based on the percentage of tests positive during the peak weeks of previous seasons using the Moving Epidemic MethodFootnote 3Footnote 4Footnote 5.

Based on influenza-associated hospitalizations across all age groups (n=274) reported by participating provinces and territories (Alberta, Manitoba, New Brunswick, Newfoundland and Labrador, Northwest Territories, Nova Scotia, Prince Edward Island and Yukon), the majority of cases requiring hospitalization had influenza type A (68%). Of those with subtype information (n=164), influenza A(H3N2) was the most common subtype (76%). The greatest proportion of hospitalized cases were adults 65 years and older (40%).

Among pediatric hospitalized cases reported by the Canadian Immunization Program Active (IMPACT) (n=69), 55% were influenza B and 45% were influenza A. The largest proportion of pediatric hospitalized cases have been among children under five years of age (63%). The number of cases reported to date is within the expected range for this time of year based on the previous five seasons.

The National Microbiology Laboratory (NML) has characterized 159 influenza viruses (78 A(H3N2), 45 A(H1N1) and 36 influenza B) that were received from Canadian laboratories.

A total of 78 A(H3N2) viruses were genetically characterized and 96% belonged to genetic group 3c.2a1b based on sequence analysis of the hemagglutinin (HA) gene. This is a different genetic group from the HA gene of the A(H3N2) component of the 2019–2020 Northern Hemisphere influenza vaccine (3C.3a).

A total of 36 influenza B viruses have been antigenically characterized; all belonged to the B/Victoria lineage and 22% were similar to the cell culture-propagated reference virus used in the production of the 2019–2020 Northern Hemisphere quadrivalent influenza vaccine. All viruses tested for antiviral resistance by the NML to date were sensitive to oseltamivir and zanamivir and resistant to amantadine.

The Canadian influenza season started in mid-November which was within an expected time frame based on previous seasons over the past decade. Viral typing and subtyping data available to date are signaling a mixed season. While A(H3N2) is the predominant strain nationally, A(H1N1) viruses represent one third of subtyped influenza A detections and B detections have been increasing in recent weeks and are above average for this time of year. Moreover, the dominance of influenza A is not homogeneous across all provinces and territories. The percentage of test positives for influenza B to date this season is following a similar trend to the 2017–2018 season when influenza A and B circulated in almost equal proportions. At this time, surveillance data suggest that the transmissibility of influenza during the 2019–2020 season is low compared to the peak of the season which is expected in the early stages of the seasonal influenza epidemic. Given that it is still the early part of the influenza season, increasing activity is expected into the new year. In general, the peak of the season, based on laboratory detections, occurs in the first few weeks of January. High levels of influenza activity usually persist through February and March.

Worldwide, results from World Health Organization’s Global Influenza Surveillance Response System laboratories are similar to those reported in CanadaFootnote 6. Influenza A viruses are predominant, with approximately 70% being A(H3N2) among subtyped detections. Nearly all influenza B viruses circulating belong to the B/Victoria lineage. Among other regions of the Northern Hemisphere, the influenza seasons have also begun in the United States and in the European Region.

Antigenic and genetic characterization results to date suggest that the majority of circulating A(H3N2) and B viruses are not similar to the components recommended for use in the 2019–2020 seasonal influenza vaccines, and that the majority of circulating A(H1N1) viruses are similar to the recommended componentsFootnote 7. This may be indicative of low level protection of the vaccine against the A(H3N2) and B strains. However, it is important to note that the effectiveness of influenza vaccines depend on several factors and cannot be predicted based solely on the similarity of currently circulating viruses relative to the vaccine reference viruses.

The Association of Medical Microbiology and Infectious Disease Canada (AMMI) recently released updated guidelines related to use of influenza antiviral medication for the 2019–2020 influenza seasonFootnote 8. The guidelines underscore that given the potential for suboptimal vaccine effectiveness this season, antiviral therapy may be more important for individuals with suspected influenza illness, notably those in high-risk groups, even with documentation of having received the 2019–2020 influenza vaccine.

Estimates of vaccine effectiveness and coverage for this season are expected in March and will be included in the FluWatch report when available. The weekly FluWatch reports are available on the Weekly Influenza Reports webpageFootnote 1.

The FluWatch team in the Centre for Immunization and Respiratory Infectious Diseases developed the first draft collaboratively; all authors contributed to the conceptualization, writing and revision of the manuscript.

Many thanks to all those across Canada who contribute to influenza surveillance.

FluWatch surveillance is funded by the Public Health Agency of Canada

World Health Organization. Pandemic Influenza Severity Assessment (PISA) - A WHO guide to assess the severity of influenza in seasonal epidemics & pandemics. May 2017. https://www.who.int/influenza/surveillance_monitoring/pisa/guidance/en/