COVID-19 and length of illness 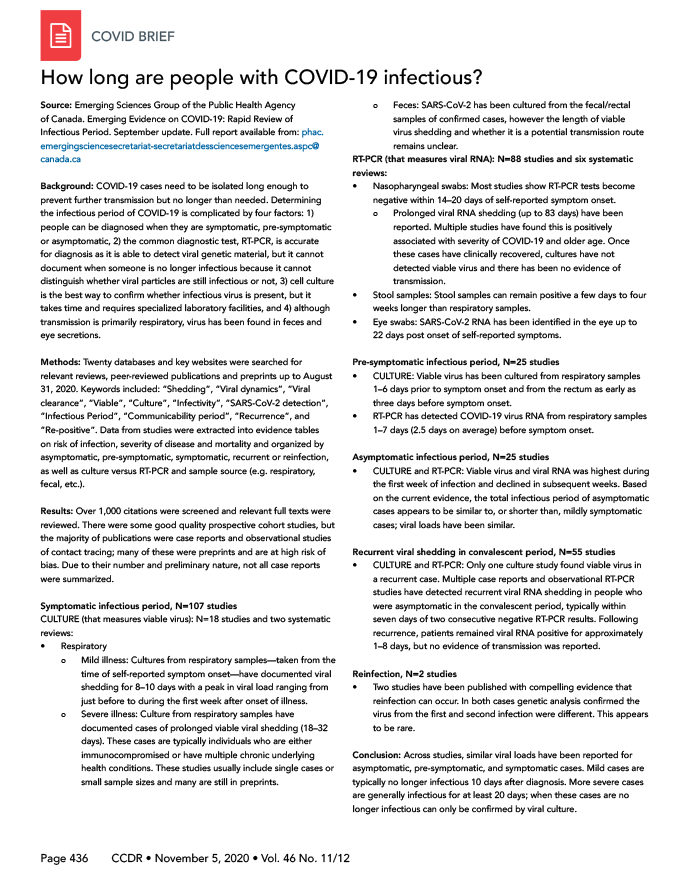 How long are people with COVID-19 infectious?

Background: COVID-19 cases need to be isolated long enough to prevent further transmission but no longer than needed. Determining the infectious period of COVID-19 is complicated by four factors: 1) people can be diagnosed when they are symptomatic, pre-symptomatic or asymptomatic, 2) the common diagnostic test, RT-PCR, is accurate for diagnosis as it is able to detect viral genetic material, but it cannot document when someone is no longer infectious because it cannot distinguish whether viral particles are still infectious or not, 3) cell culture is the best way to confirm whether infectious virus is present, but it takes time and requires specialized laboratory facilities, and 4) although transmission is primarily respiratory, virus has been found in feces and eye secretions.

Results: Over 1,000 citations were screened and relevant full texts were reviewed. There were some good quality prospective cohort studies, but the majority of publications were case reports and observational studies of contact tracing; many of these were preprints and are at high risk of bias. Due to their number and preliminary nature, not all case reports were summarized.