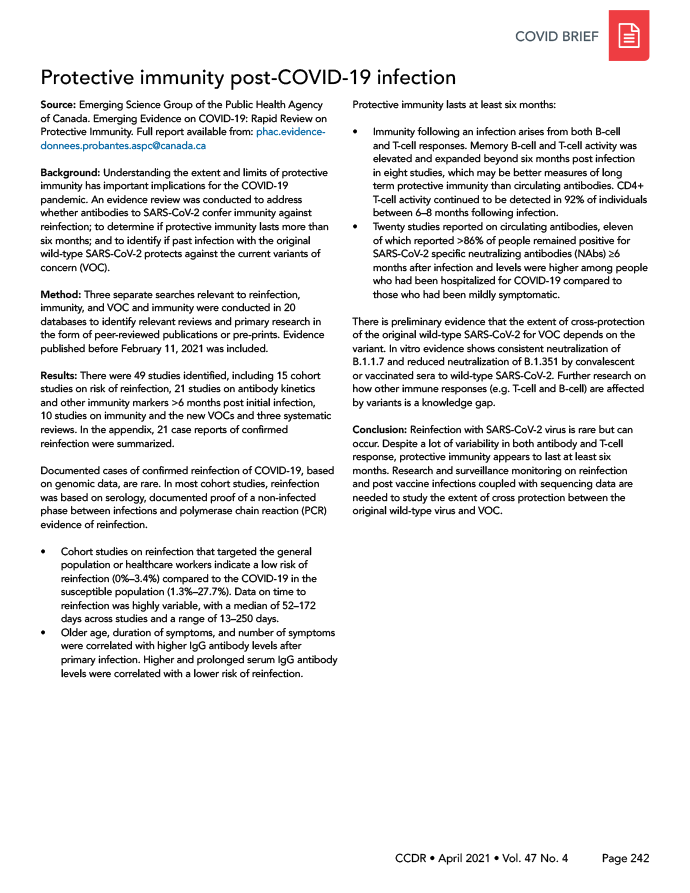 Background: Understanding the extent and limits of protective immunity has important implications for the COVID-19 pandemic. An evidence review was conducted to address whether antibodies to SARS-CoV-2 confer immunity against reinfection; to determine if protective immunity lasts more than six months; and to identify if past infection with the original wild-type SARS-CoV-2 protects against the current variants of concern (VOC).

Method: Three separate searches relevant to reinfection, immunity, and VOC were conducted in 20 databases to identify relevant reviews and primary research in the form of peer-reviewed publications or pre-prints. Evidence published before February 11, 2021 was included.

Results: There were 49 studies identified, including 15 cohort studies on risk of reinfection, 21 studies on antibody kinetics and other immunity markers >6 months post initial infection, 10 studies on immunity and the new VOCs and three systematic reviews. In the appendix, 21 case reports of confirmed reinfection were summarized.

Documented cases of confirmed reinfection of COVID-19, based on genomic data, are rare. In most cohort studies, reinfection was based on serology, documented proof of a non-infected phase between infections and polymerase chain reaction (PCR) evidence of reinfection.

There is preliminary evidence that the extent of cross-protection of the original wild-type SARS-CoV-2 for VOC depends on the variant. In vitro evidence shows consistent neutralization of B.1.1.7 and reduced neutralization of B.1.351 by convalescent or vaccinated sera to wild-type SARS-CoV-2. Further research on how other immune responses (e.g. T-cell and B-cell) are affected by variants is a knowledge gap.

Conclusion: Reinfection with SARS-CoV-2 virus is rare but can occur. Despite a lot of variability in both antibody and T-cell response, protective immunity appears to last at least six months. Research and surveillance monitoring on reinfection and post vaccine infections coupled with sequencing data are needed to study the extent of cross protection between the original wild-type virus and VOC.