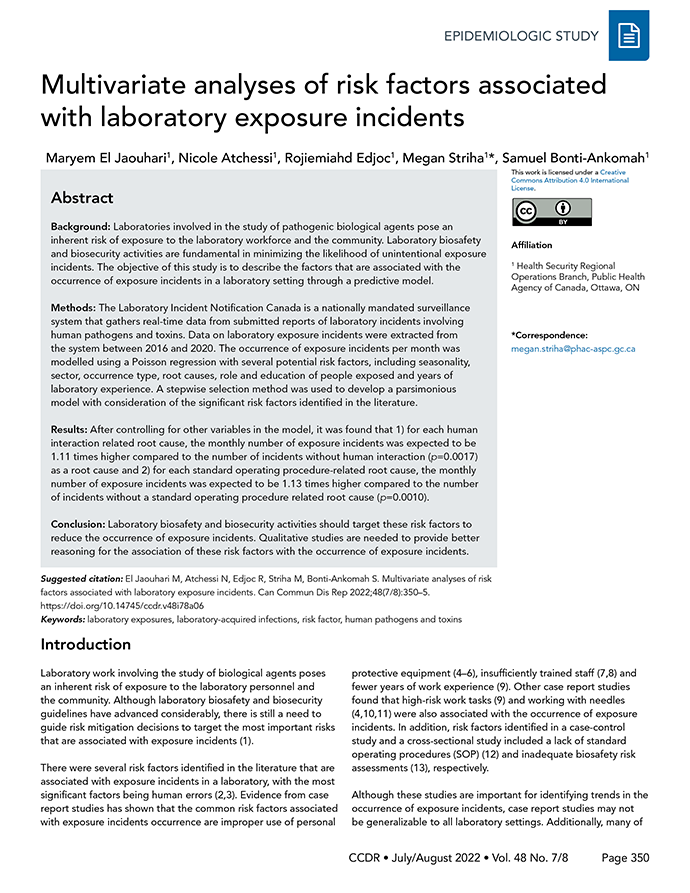 Background: Laboratories involved in the study of pathogenic biological agents pose an inherent risk of exposure to the laboratory workforce and the community. Laboratory biosafety and biosecurity activities are fundamental in minimizing the likelihood of unintentional exposure incidents. The objective of this study is to describe the factors that are associated with the occurrence of exposure incidents in a laboratory setting through a predictive model.

Methods: The Laboratory Incident Notification Canada is a nationally mandated surveillance system that gathers real-time data from submitted reports of laboratory incidents involving human pathogens and toxins. Data on laboratory exposure incidents were extracted from the system between 2016 and 2020. The occurrence of exposure incidents per month was modelled using a Poisson regression with several potential risk factors, including seasonality, sector, occurrence type, root causes, role and education of people exposed and years of laboratory experience. A stepwise selection method was used to develop a parsimonious model with consideration of the significant risk factors identified in the literature.

Laboratory work involving the study of biological agents poses an inherent risk of exposure to the laboratory personnel and the community. Although laboratory biosafety and biosecurity guidelines have advanced considerably, there is still a need to guide risk mitigation decisions to target the most important risks that are associated with exposure incidentsFootnote 1.

There were several risk factors identified in the literature that are associated with exposure incidents in a laboratory, with the most significant factors being human errorsFootnote 2Footnote 3. Evidence from case report studies has shown that the common risk factors associated with exposure incidents occurrence are improper use of personal protective equipmentFootnote 4Footnote 5Footnote 6, insufficiently trained staffFootnote 7Footnote 8 and fewer years of work experienceFootnote 9. Other case report studies found that high-risk work tasksFootnote 9 and working with needlesFootnote 4Footnote 10Footnote 11 were also associated with the occurrence of exposure incidents. In addition, risk factors identified in a case-control study and a cross-sectional study included a lack of standard operating procedures (SOP)Footnote 12 and inadequate biosafety risk assessmentsFootnote 13, respectively.

In this report, surveillance data were analyzed and a mathematical model that predicts the risk factors that are associated with exposure incidents was developed. This model could inform licensed facilities to prioritize laboratory biosafety and biosecurity activities on important risk factors to reduce the occurrence of exposure incidents in the future.

The Laboratory Incident Notification Canada (LINC) surveillance system collects real-time data from licensed laboratory incidents involving human pathogens and toxins. It is the only mandated surveillance system that is required to collect exposure incidents from licensed laboratories across Canada. Notification and follow-up reports of laboratory incidents are received through the Biosecurity Portal and then captured by the internal Customer Relationship Management system.

Data were extracted from this system on the exposure incidents that took place from January 1, 2016, to December 31, 2020. Incidents that did not have a known occurrence date were also included if they were reported during this period. Data of the most recent follow-up reports were used for analysis, while the data of initial reports were used where corresponding follow-up reports and/or data were not present as of the data extraction date, February 8, 2021. The extracted data were cleaned and inspected for any missing values, duplicate entries and/or outliers.

The data from the LINC surveillance system was imported into SAS EG 7.1 to perform data manipulation and multivariate analyses. The original database contained 284 rows collected over five years, where each row contained one incident. One incident can involve multiple occurrence types and more than one root cause can be identified for one incident. Data were transformed to obtain a monthly count of exposure incidents and to examine their seasonality occurrence over five years. In this transformation, 284 individual exposure incidents were grouped by month to give 60 monthly observations. The sample size was smaller due to the transformation from reported incidents per row to reported incidents per month per row. Three months were excluded from our sample because there were no incidents reported. The final dataset had 57 observations.

Both univariate and bivariate analyses were first conducted to explore the associations between the predictive independent variables and the outcome variable of interest. Independent significant parameters identified in the bivariate analyses were included in the multivariate Poisson regression analysis. A p-value of 0.05 was chosen as the cut-off point for entry and exit into the stepwise procedure. Stepwise selection of variables was conducted by groups of variables to identify factors associated with the occurrence of exposure incidents because of the high number of variables and small sample size.

From 2016 to 2020, there were 614 individuals exposed in the 284 confirmed exposure incidents reported to LINC. The average monthly occurrence of incidents was 4.98. Laboratory characteristics of the exposure incidents can be found in Table 1. In this dataset, the median years of laboratory experience was 7.25. Most exposed individuals had a technical/trade diploma (66.3%) or a bachelor's degree (25.5%) and belonged in the hospital sector (57.5%), academic (17.7%) or private (11.2%) sectors. Most individuals exposed were technicians/technologists (74.9%). Among exposed individuals, the most common route of exposure to human pathogens and toxins was through inhalation (62.2%) or inoculation (14.2%). The most commonly reported occurrence types were procedural (23%) and sharps-related (22.0%). Standard operating procedures (25.6%) and human interactions (19.4%) were the most commonly cited root causes. Additional descriptive data on exposure incidents may be found in our annual reports between 2016 and 2020Footnote 2Footnote 16Footnote 17Footnote 18Footnote 19.

Bivariate regression analysis results can also be found in Table 1. The relationship between the outcome of interest (number of exposure incidents per month) and each independent variable was determined through Poisson regression. The exponents of the estimated regression coefficients and the p-values are listed in Table 1.

Bivariate Poisson regression analyses for the association between the number of exposure incidents and seasonality in Table 3. The exponents of the estimated regression coefficients and the p-values are listed in Table 3. The analyses revealed that the month of June was significantly associated with less occurrence of exposure incidents when compared with December (p=0.0286).

Through descriptive analysis, previous studies identified 1) lack of awareness of or compliance with SOP and 2) human interactions as leading root causesFootnote 2Footnote 3Footnote 12; however, our study provided adjusted estimates that quantify and confirm the contribution of these causes to the increase in exposure incidents. Human interaction was commonly described as, but not limited to, a violation (cutting a corner, not following correct procedure, deviating from SOP) or an error (a mistake, lapse of concentration, or slip of some sort)Footnote 18. Standard operating procedure-related issues were described as documents not being followed correctly for the task, or as SOP not being in placeFootnote 18.

Technicians and technologists were commonly identified as those more often involved in exposure incidents when compared with other individuals in the laboratoriesFootnote 2Footnote 3Footnote 20. These previous findings were based on descriptive statistics and might be explained by the high number of technicians and technologists working in laboratory settingsFootnote 2Footnote 3Footnote 20; however, the multivariate model of our study highlighted that the contribution of the role of technicians to the increase in exposure incidents was not significant, when the other variables remain constant. Risk mitigation decisions in licensed facilities should mainly target human interaction and lack of compliance to SOP, to prevent the occurrence of exposure incidents.

The most significant limitation of this study was the low sample size due to the transformation of the data into monthly data, which was required to conduct the multivariate analyses and to examine the seasonality. In addition, the LINC surveillance system only captures the information on the affected people and not for the entire laboratory workforce. The information on the entire laboratory workforce could be valuable to compare the characteristics of those who are exposed and those who are not. Furthermore, the surveillance system does not collect sufficient data on all potential predictive variables. For example, the system collects data on management oversight; however, additional information on the role of management oversight in controlling biosafety and biosecurity risks in the laboratories could be valuable.

This study found that human interactions and SOP-related issues were significantly associated with the occurrence of exposure incidents. These findings are also consistent with the literature, which emphasizes the need for licensed facilities to examine current safety protocols regarding compliance to SOP and human interactions. Additional research, such as qualitative studies, is needed to provide better reasoning for the association of these risk factors with the occurrence of exposure incidents.