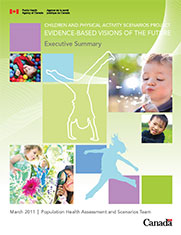 In 2007 the Chief Public Health Officer initiated the Public Health Scenarios Development Project. The intent was to develop scenario expertise within the Public Health Agency of Canada as a means to assist with long-term strategic thinking around complex population and public health issues.

Planning through the use of scenarios can be used to great effect by private and public sectors within Canada and internationally to anticipate possible alternative futures and for strategizing in the context of uncertainty. Scenarios present possible futures in response to a defined issue or problem, and can be used to explore, debate and deliberate complex public health issues ranging from health outcomes to determinants of health. This approach is used to expand traditional decision making and planning horizons.

Scenarios can be described as sets of relevant and credible stories about the future (or the past), and can be used to learn about the integration of multiple perspectives or epistemologies. They combine experiential knowledge with scientific information, as well as integrate social and natural sciences. These plausible futures are not predictive, nor does this process define strategies. Instead, these resultant scenarios are more like hypotheses that ask “what if” in a disciplined way, forcing acknowledgement of new and unforeseen opportunities or challenges for an organisation. Scenarios are built on the foundation of exploring uncertainty and impact among many environments that influence an issue.

As one of a series of Public Health related scenarios to be developed by the Public Health Agency, the Children and Physical Activity Scenarios Project was designed to explore alternative physical activity futures among 5-12 year old children in Canada over the next 50 years.

The Children and Physical Activity Scenarios Project was a multi-method exploration and analysis of alternative physical activity futures among 5-12 year old children in Canada over the next 50 years. Participation in physical activity by children was identified as appropriate for scenario development since the aetiology and consequences of the increasing rates of childhood sedentariness are highly complex, and comprehensive population health solutions remain elusive in spite of earnest individual and collective efforts.

This project was comprised of five phases. The first phase, ‘Identifying Drivers and Trends’ was a literature review to determine major drivers, and trends associated with children’s activity and inactivity. Major drivers and trends explore what forces are impacting our current environment and what is coming on the horizon that may change those environments which may impact an issue. In order to capture a comprehensive and diverse range of influences on physical activity and inactivity in children, this project explored the social, technological, educational, emerging/re-emerging conditions; environment (physical); population; political, economic, and regulatory environments to identify the major drivers and trends. This project identifies the key drivers of change shaping the wider context of physical activity and children.

The second phase, ‘Exploring Uncertainty’, involved interviews with 29 Canadian and international health, activity, education, technology, social science and built environment experts who were asked to articulate those drivers and trends associated with children’s physical activity that had yet to be published in the scholarly literature, or were emerging in their fields.

The third phase, ‘Scenario Logics’, involved the identification of the logics or core relationships between the variability and uncertainties associated with major drivers of activity and inactivity as identified both through literature review and interviews. These logics were found to focus on:

The fourth phase, ‘Scenario Narratives’, was the last of the predominantly qualitative components to this process. This phase involved developing and expanding the logics and their interrelationships into four plausible and distinct future scenarios of children’s physical activity. These scenario narratives were entitled: ‘À la Carte’; ‘Cocoon’; ‘No Child Left Inside’; and ‘Smart Complex’.

In describing the four scenario narratives, we first encounter ‘À la Carte’, a Canadian society which is characterized by: daily dependence on “small ‘t’” technology; a mix of moderate cocooning and community cohesion; short-term multi-sectoral partnerships; and moderate government influence. This scenario attempted to reflect experts’ concerns with the constraints that exist at the level of individual and family decision-making in the area of physical activity. Specifically, the constitution of ‘choice’ of activity and inactivity reflects the dynamic between societal, consumer and parental preferences and behaviours, and the external community and policy environment.

The ‘Cocoon’ scenario shows Canadians living in a society in which the pervading atmosphere is that of insularity, cautiousness, and fondness of the familiar. Cocooning, both socially and in the built environment, is associated with achieving personal and family security. However, the same behaviours preclude neighbourhood interaction and inhibit a broader sense of community belonging. Government influence is strong, through physical activity monitoring and regulation, liberal tax incentives, and sponsored initiatives. These multiple efforts by government to provide a range of options to citizens is in keeping with a consumerist approach that privileges purchasing power and materialism.

In the scenario ‘No Child Left Inside’, Canadians live and work in a built environment that fosters children’s physical and emotional well-being through a heightened connection with nature. This enables community cohesion through pedestrian- and all-ages friendly urban design, and where broad ecological protection is elicited through an emotional attachment to place. The most apparent social and political trends of this society include consumer-driven demands for healthy and organic products, strong and trusted government leadership in the areas of healthy and sustainable lifestyle, and genuine engagement in corporate good citizenship by private industry and not-for-profit organizations.

‘Smart Complex’ is a scenario in which Canadians are provided with opportunities for public engagement throughout the life-course through purposive urban design that includes a comprehensive school health model. The Smart Complex scenario is characterized by committed, strategic partnerships among diverse sectors and the use of built environment design properties to fulfil public health goals. This scenario was grounded in experts’ concerns with Canada’s aging demographics, the need for the maintenance of physical activity for all ages, and the necessity of broad-based coalitions to effectively address the education, health and social needs of future generations.

The fifth and final phase is a quantitative exploration of the potential impact on population health, setting parameters for selected major drivers and how they might change in specific environments. It is important to recognise that a limited number of variables can be explored in a quantitative setting, and thus outcomes will vary with the choice of variables and factors considered. Thus, these models can bring alternative perspectives to the consideration of plausible futures and specifically here to the four scenario narratives, but these outcomes will depend on the inherent assumptions of the modelling process and available data. This process involved the investigation of different forms of micro-simulation modelling to illustrate potential individual, population, and systems impacts related to physical activity and health. These techniques helped to quantify how the intensity and duration of physical activity in children might play itself out with regards to morbidity (Total Years Disabled) and mortality (Total Years Life Lost) chronic conditions such as ischemic heart diseases, stroke, hypertension, colon cancer, breast cancer, diabetes type II, and osteoporosis.

First, a Static Model approach was used to look at the implications of physical activity levels that would be suggested by the four scenario narratives presented in Phase IV. In this case, transition matrices were used to quantify comparisons in the relative levels of activity for children living within each of the four plausible futures. Children’s activity levels were classified as ‘inactive’, ‘low’, ‘moderate’ and ‘high’ intensity on the basis of the Metabolic Equivalent of Task (MET). Hours per day spent at each of these four levels were estimated based on the description of the future worlds presented in the À la Carte, Cocoon, No Child Left Inside and Smart Complex narratives. The models were limited by the currently available data on physical activity, the outcomes considered (Life Expectancy and Mortality) and by a number of assumptions that were required for the modelling process. The potential impacts that were suggested through this type of modelling indicated that the cohort of children in the scenario depicted by No Child Left Inside had the highest life expectancy, and lowest mortality of the four narratives. Life expectancy and mortality due to levels of physical activity were similar for the Smart Complex and À La Carte scenarios. Finally, the Cocoon scenario produced the lowest life expectancy and highest mortality of the four narrative constructs used in this modelling exploration. The modelling outcomes did suggest that an increase in both moderate and high intensity level activity has a positive effect on the health outcomes measured.

Secondly, a non-stochastic Compartmental Model was used to investigate what was described as a ‘backlook’ scenario in order to explore how the environment has changed in its impact on physical activity in children over the past 50 years. The question driving the modelling was posed as: “If Canadian children in 2000 have the same level of physical activity (PA) as those in the 1950s, to what extent would the health outcomes for these children change?” In response, models were created under the assumption that children in the 1950s could have had 10% to 25% higher levels of activity than children in 2000. In taking a cohort of 5-12 year old children in 2000 and carrying them forward 78 years with increases in their activity levels of 10% and 25% , general findings showed that this:

Thus these analyses suggest that if Canadians adopted the assumed physical activity levels of individuals who were 5-12 during the 1950s, there would be a decrease in disease morbidity, disability and mortality levels across all diseases under consideration in this study (related to physical activity/inactivity).

Scenarios provide public health planners and decision-makers with alternate visions of the future. These are designed to promote debate and visioning, and thereby elicit thoughtful planning for a range of possible, plausible outcomes. Effective, nimble responses founded on collaborative and diverse strategic thinking are the key to positive futures in public health. There is no paucity of information on public health issues, however there is a need to develop and support innovative processes such as scenario analysis that utilise, challenge, and engage a variety of stakeholders with a variety of perspectives at different levels both nationally and globally. Scenarios can support a role in both generating and testing strategies on specific issues in an organization. Through the generating and testing of strategies, an organization can identify potential risks and further mitigation strategies.

For the full report, or more information on the Population Health Assessment and Scenarios Team, please contact: phas_esps@phac-aspc.gc.ca