This article has been peer reviewed.

Purpose: To determine the percentage of Canadian youth meeting screen-time guidelines and to identify characteristics associated with different screen-time behaviours.

Conclusion: Developing a better understanding of the factors associated with more hours of screen time is required to develop and target interventions that reduce screen-time behaviours.

Screen-based sedentary behaviours likely have a negative impact on many different aspects of youth health and development.(1-2)For instance, the increasing trend in youth obesity in North America coincides with an increasing prevalence of youth reporting over 3 hours of screen time per day.(3) The American Academy of Pediatrics(4) has developed guidelines that recommend limiting children’s total entertainment screen time to no more than 1 to 2 hours of quality programming per day. Considering that few Canadian youth currently meet these recommendations,(5-6) activities designed to reduce sedentary screen time among youth should be a public health priority.

A substantial body of research has examined characteristics associated with watching television (TV).(3,6-8) More recently, other types of sedentary screen-time behaviours have also garnered attention, for example, playing video games and using computers.(5,6,8) It seems that youth are more likely to spend time in these types of screen-based behaviours if they are male,(5,6,9-11) older,(5,9,11) from a low income family(9) or if they engage in risk behaviours such as smoking.(12) Given that this is also a developmental period when youth’s self-esteem is associated with the likelihood of their engaging in health-promoting or inhibiting behaviours,(13) it is important to determine if screen time is associated with self-esteem. Considering that excessive screen time is associated with an increased risk of obesity(1,3)and engaging in other risk behaviours,(5) a better understanding of different screen-time behaviours would provide valuable insight for targeting or tailoring interventions to prevent or reduce screen time among youth populations.

The purpose of our study was to determine the percentage of Canadian youth who exceed the recommended screen time guideline and to identify characteristics associated with different screen-time behaviours.

Our study used nationally representative data collected from 51 922 students in grades 6 to 12 as part of the 2008/2009 Canadian Youth Smoking Survey (YSS).(14) In brief, the target population for this study consisted of all young Canadian residents in grades 6 to 12 attending public and private secondary schools in 10 Canadian provinces. The YSS was administered to students during class time, and participants were not compensated. To reduce demands on schools and to increase student participation rates, the YSS used active information with passive consent.

The YSS asked respondents to report the average number of hours per day that they spent (a) watching TV or videos,[*] (b) playing video games and (c) playing games or surfing the Internet on a computer. Respondents could choose from “none,” “less than 1 hour a day,” “1 to 2 hours a day,” “more than 2 hours a day but less than 5 hours a day,” or “5 or more hours a day” for each behaviour. Consistent with existing research(8,15)and guidelines,(4) we grouped responses for each construct into two categories (≤ 2 hours/day, > 2 hours/day) for each individual activity and for the total screen time. We calculated a conservative estimate of the mean screen time per day based on the lowest value of each response category reported. The YSS also collected information on demographics, cigarette smoking behaviour, weekly spending money and self-esteem. Specific details on these measures are available elsewhere.[†]

We examined descriptive analyses of our three sedentary behaviour constructs as well as cigarette smoking behaviour, weekly spending money, self-esteem, region and grade by sex. We then conducted four logistic regression models to examine factors associated with watching TV or videos, playing video games, and playing or surfing on a computer for more than 2 hours a day per each behaviour as well as total screen time for more than 2 hours a day. Survey weights for descriptive statistics were used to adjust for differential response rates across regions or groups; the statistical package SAS version 8.02 was used for all analyses.(16)

[*] Video time refers to TV series or movies watched at home, on video tape, DVD or Blu-ray. In our preliminary research validating the comprehension of these measures with youth populations, the youth we sampled interpreted the term “video” to refer to any type of movie or TV series watched at home. 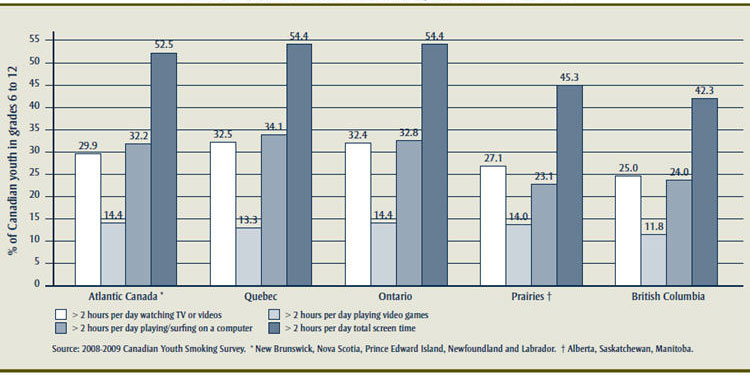 Figure 2
Model-based odds ratios for spending more than 2 hours per day watching TV, playing video games, or playing/surfing on a computer as a function of self-esteem among students in grades 6 to 12, Canada, 2008/2009 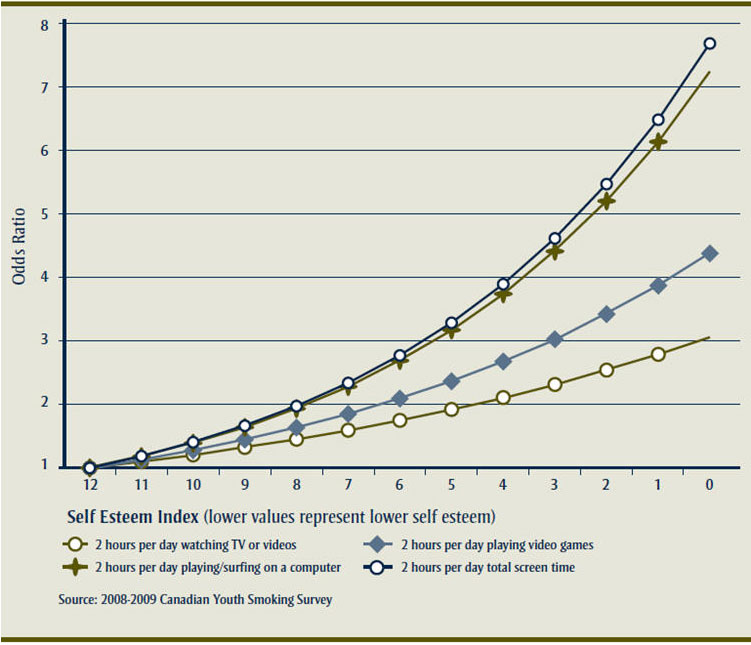 Developing a better understanding of screen-time behaviours and the factors associated with them can be used to inform the development of prevention programming among youth populations. This study showed that grade 6 to 12 students in our nationally representative sample are very involved in screen-time behaviours; these data also support the recommendation that intervention efforts to reduce screen time must begin prior to adolescence.(17) Given that our sample demographics are consistent with other North American youth populations,(18,19) these findings are fairly representative within that context.

Our study showed that the majority—over 1.4 million—of Canadian youth in grades 6 to 12 exceeded the recommended guidelines of less than 2 hours of screen time per day.(4) Even when using a conservative estimate of average screen time, the youth in our sample exceeded existing guidelines by over 5 hours per day; the daily average time for each individual screen-based behaviour also exceeded recommendations for total screen time. A substantial number of youth exceeded the guideline recommendations based on their daily time spent in a single screen-time behaviour, consistent with previously published Canadian data from 2001/2002.(6) This suggests that there is substantial room for decreasing screen time by at least 90 minutes per day as recommended by Canada’s Physical Activity Guides for Children and Youth.(20) However, considering that screen time is a behaviour distinct from a lack of physical activity(15,21,22) and that many youth with high levels of screen time are also highly active,(21) those behaviour-specific interventions that are designed to reduce screen time by promoting physical activity may be inadequate.

To the best of our knowledge, this is the first study to identify a significant association between self-esteem and screen-time behaviour, contradicting previous research that suggested self-esteem was not associated with sedentary behaviour.(11) Since youth who are involved in sports and clubs after school have higher self-esteem than those who are not engaged in such activities,(13) and rates of screen-time behaviours are highest after school,(23) interventions should be designed to engage students in extracurricular activities that could reduce their screen time after school and improve their self-esteem. If effective, such interventions could be very important as low self-esteem and screen time have both been linked to numerous negative health outcomes among youth, such as smoking and other substance abuse.(12,13)

Earlier research suggested that youth with lower income parents are more likely to report more than 2 hours of screen time per day than youth with higher income parents.(9) We found that the disposable income of students is associated with time spent in all three screen-based behaviours, but the direction of the association is not the same across all behaviours. This suggests that a tailored approach to reducing screen time may be required for youth populations based on their disposable income. Consistent with previous research,(12) we also found that current smokers tended to spend more time watching TV and videos and playing video games. It would be useful to evaluate the impact of reducing sedentariness on the smoking behaviour of this sub-population of at-risk youth.

This study had several limitations. Since no data on physical activity or obesity exist among the YSS measurement tools, we were unable to examine the association between screen time and these correlates. The measure used for sedentary behaviour in the 2008/2009 YSS do not allow us to calculate respondents’ total sedentary time, or to determine the time spent in different sedentary behaviours on weekdays versus weekends. Although the 2008/2009 YSS collected a measure of time spent reading for fun, we did not include this in our research because education stakeholders consider reading for fun constructive due to its positive impact on educational performance rather than lacking a health benefit for youth. Further, causal relationships cannot be inferred from these cross-sectional data. Data were also based on self-reports so the validity of the responses may be questionable; however, honest reporting was encouraged by ensuring confidentiality during data collection.

With the high prevalence of Canadian youth exceeding recommended guidelines for screen time, we need to improve our understanding of the reasons for these sedentary behaviours and their correlates. This may be especially pertinent if the rise in obesity among youth populations is in fact influenced by an overall decrease in energy expenditure due to increased sedentary behaviour. Considering that most nationally representative surveillance data do not monitor different sedentary behaviours,(24) the insight gained from this study provides a better understanding of the prevalence of different screen-time behaviours among Canadian youth as well as insight for tailoring future screen-time reduction interventions.

Dr. Scott Leatherdale is a Cancer Care Ontario Research Chair in Population Studies. The 2008/2009 Youth Smoking Survey is a product of a pan-Canadian capacity building project that includes Canadian researchers from all provinces and provides training opportunities for university students at all levels. Production of this paper was made possible through a financial contribution from Health Canada. The views expressed herein do not necessarily represent the views of Health Canada.