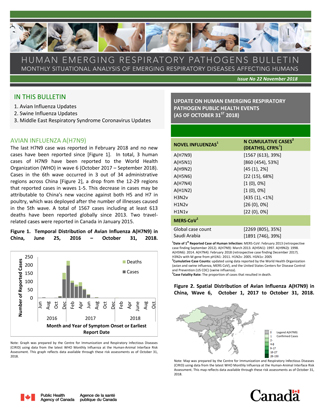 The last H7N9 case was reported in February 2018 and no new cases have been reported since [Figure 1].  In total, 3 human cases of H7N9 have been reported to the World Health Organization (WHO) in wave 6 (October 2017 – September 2018). Cases in the 6th wave occurred in 3 out of 34 administrative regions across China [Figure 2], a drop from the 12-29 regions that reported cases in waves 1-5. This decrease in cases may be attributable to China’s new vaccine against both H5 and H7 in poultry, which was deployed after the number of illnesses caused in the 5th wave. A total of 1567 cases including at least 613 deaths have been reported globally since 2013. Two travel-related cases were reported in Canada in January 2015.

On February 14, 2018, the WHO was notified of the first known human case of Avian Influenza A(H7N4). No new cases have been reported since.

In October 2018, one new case of H5N6 was reported. The case is a 44 year old male from Guangxi, China, who denied contact with live poultry before symptom onset. The case died on October 27, 2018. There have been a total of 22 cases, including 15 deaths, reported globally since 2014, with all cases occurring in China.

In October 2018, no new cases of H3N2v were reported to the WHO. The Indiana State Department of Health reported the first case of H3N2v this year in the United States in a county fairgoer who had been in close proximity to swine. The case is a child (<12 years old) who developed symptoms on June 18 and has since fully recovered. One locally-acquired case of H3N2v was reported in Canada in December 2016.

In October 2018, no new cases of H1N2v were reported to the WHO.  Since 2005, there have been a total of 26 confirmed cases of H1N2v in the United States. Most of the reported cases resulted in mild illness.