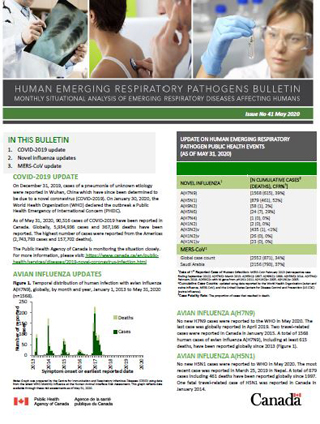 On December 31, 2019, cases of a pneumonia of unknown etiology were reported in Wuhan, China which has since been determined to be due to a novel coronavirus (2019-nCoV). On January 30, 2020, the World Health Organization (WHO) declared the outbreak a Public Health Emergency of International Concern (PHEIC).

Two new cases of H9N2 were reported in May 2020, both from China. The first case was a 6 year old boy from Weihai City, Shandong Province. The second case was a 10 month old boy from Xiamen, Fujian Province. Both cases had exposure to poultry or a live bird market, mild illness, and have recovered. Globally, 58 human cases, including one death, have been reported since 1998.

No new cases of H7N4 were reported to the WHO in May 2020. On February 14, 2018, the WHO was notified of the first known human case of H7N4. The case was associated with poultry exposure. No cases have been reported since.

The most recent case of swine origin influenza H3N2v was reported in June 2018 in the United States. The case reported exposure to swine at an agricultural fair. A total of 435 cases, including 1 death, have been reported globally since 2011. One locally-acquired case of H3N2v was reported in Canada in December 2016.

The most recent case of swine origin influenza H1N1v was reported in May 2019 in the United States. The case was over 65 years old, had no history of swine exposure, and has fully recovered. A total of 23 cases have been reported globally since 2005. To date, the reported H1N1v infections have been associated with mild illness.