In Canada and abroad, the impacts of climate change are becoming evident. Impacts such as coastal erosion; thawing permafrost; increases in heat waves, droughts and flooding; and risks to critical infrastructure and food security are already being felt in Canada. The science is clear that human activities are driving unprecedented changes in the Earth’s climate, which pose significant risks to human health, security, and economic growth.

Taking strong action to address climate change is critical and urgent. The cost of inaction is greater than the cost of action: climate change could cost Canada $21-$43 billion per year by 2050, according to 2011 estimates from the National Round Table on the Environment and the Economy. Businesses and markets are increasingly considering climate risks. In recent years, severe weather events have cost Canadians billions of dollars, including in insured losses. Indigenous Peoples, northern and coastal regions and communities in Canada are particularly vulnerable and disproportionately affected. Geographic location, socio-economic challenges, and for Indigenous Peoples, the reliance on wild food sources, often converge with climate change to put pressure on these communities. Much has been done to begin addressing these challenges, including by Indigenous Peoples.

Acting on climate change will reduce risks and create new economic opportunities and good jobs for Canadians. There is already a global market for low-carbon goods and services worth over $5.8 trillion, which is projected to keep growing at a rate of 3 percent per year. Clean growth opportunities will benefit all sectors and regions. Canada will remain globally competitive through innovation, including through the development and promotion of innovative technologies with the potential to address climate change globally. This includes clean technology to enable the sustainable development of Canada’s energy and resource sectors, including getting these resources to market, as Canada transitions to a low-carbon economy. Innovation can help further reduce emissions and the cost of taking action at home. Canadian technologies and solutions can also be exported abroad and deployed around the world, creating new markets and partners for Canadian businesses and supporting global action to reduce emissions.

The federal government will continue to work in close collaboration with other countries on climate solutions, including with partners across North America. A number of provinces and territories have already joined or are exploring entry into regional and international efforts to reduce GHG emissions. Canadian municipalities will also continue to be important partners in developing and implementing climate solutions locally, as well as through international collaboration with other municipalities around the world.

The international community has agreed that tackling climate change is an urgent priority and also an historic opportunity to shift towards a global low-carbon economy. The adoption of the Paris Agreement in December 2015 was the culmination of years of negotiations under the United Nations Framework Convention on Climate Change. The Paris Agreement is a commitment to accelerate and intensify the actions and investments needed for a sustainable low-carbon future, to limit global average temperature rise to well below 2 °C above pre-industrial levels, and to pursue efforts to limit the increase to 1.5 °C. This will require taking action on long-lived GHGs such as carbon dioxide and short-lived climate pollutants such as methane, hydrofluorocarbons and black carbon.

As a first step towards implementing the commitments Canada made under the Paris Agreement, First Ministers released the Vancouver Declaration on Clean Growth and Climate Change on March 3, 2016.

How we developed the Framework

The development of the Pan-Canadian Framework was informed by input from Canadians across the country, who made it clear that they want to be part of the solution to climate change. Under the Vancouver Declaration, First Ministers asked four federal-provincial-territorial working groups to work with Indigenous Peoples; to consult with the public, businesses and civil society; and to present options to act on climate change and enable clean growth. The working groups heard solutions directly from Canadians, through an interactive website, in-person engagement sessions, and independent town halls.

Representatives of Indigenous Peoples contributed their knowledge and expectations for meaningful engagement in climate action and provided important considerations and recommendations either directly to working groups or to ministers, which helped shape this framework.

Ministers also reached out to Canadians, businesses, non-governmental organizations, and Indigenous Peoples to hear their priorities. In addition, ministerial tables were convened to provide their advice, including the Canadian Council of Ministers of the Environment, Ministers of Innovation, Ministers of Energy, and Ministers of Finance.

Engaging Canadians: The Let’s Talk Climate Action website was launched on April 22, 2016 to gather ideas and comments from Canadians about how Canada should address climate change. By the submission deadline of September 27, 2016, over 13,000 ideas and comments were received. In addition, consultations by governments and working groups on clean growth and climate change were held across Canada.

Pillars of the Framework

The Pan-Canadian Framework has four main pillars: pricing carbon pollution; complementary measures to further reduce emissions across the economy; measures to adapt to the impacts of climate change and build resilience; and actions to accelerate innovation, support clean technology, and create jobs. Together, these interrelated pillars form a comprehensive plan.

Pricing carbon pollution is an efficient way to reduce emissions, drive innovation, and encourage people and businesses to pollute less. However, relying on a carbon price alone to achieve Canada’s international target would require a very high price.

Complementary climate actions can reduce emissions by addressing market barriers where pricing alone is insufficient or not timely enough to reduce emissions in the pre-2030 timeframe. For instance, tightening energy efficiency standards and codes for vehicles and buildings are common sense actions that reduce emissions, while also helping consumers save money by using less energy.

Canada is experiencing the impacts of climate change, so there is also a need to adapt and build resilience. This means making sure that our infrastructure and communities are adequately prepared for climate risks like floods, wildfires, droughts, and extreme weather events, including in particularly vulnerable regions like Indigenous, northern, coastal, and remote communities. This also means adapting to the impacts of changes in temperature, including thawing permafrost.

A low-carbon economy can and will be a strong and thriving economy. Taking action now, to position Canada as a global leader on clean technology innovation, will help ensure that Canada remains internationally competitive and will lead to the creation of new good jobs across the country. Investing in clean technology, innovation, and jobs will bring new and in-demand Canadian technologies to expanding global markets. These investments will help improve the efficiency and cost-effectiveness of mitigation and adaptation measures and will equip Canada’s workforce with the knowledge and skills to succeed.

In implementing the Pan-Canadian Framework on Clean Growth and Climate Change, federal, provincial and territorial governments will review progress annually to assess the effectiveness of our collective actions and ensure continual improvement. First Ministers commit to report regularly and transparently to Canadians on progress towards GHG-reduction targets, on building climate resilience, and on growing a clean economy.

Our governments will continue to recognize, respect and safeguard the rights of Indigenous Peoples as we take actions under these pillars.

The Pan-Canadian Framework reaffirms the principles outlined in the Vancouver Declaration, including

Governments recognize the unique circumstances of the North, including disproportionate impacts from climate change and the associated challenges with food security, emerging economies, and the high costs of living and of energy.

Federal, provincial, and territorial governments will work collaboratively to grow the economy, create good-paying and long-term jobs, and reduce GHG emissions in support of meeting or exceeding Canada’s 2030 target. These actions will be supported by strong, complementary adaptation policies to build climate resilience. Indigenous Peoples will be important partners in developing real and meaningful outcomes that position them as drivers of climate action in the implementation of the Pan-Canadian Framework. All governments across Canada are committed to ambitious and sustained action on climate change, building on current actions and future opportunities.

The federal government’s renewed relationship with Indigenous Peoples: The federal government also reiterates its commitment to renewed nation-to-nation, government-to-government, and Inuit-to-Crown relationships with First Nations, the Métis Nation and Inuit, based on the recognition of rights, respect, cooperation, and partnership, consistent with the Government of Canada’s support for the United Nations Declaration on the Rights of Indigenous Peoples, including free, prior and informed consent.

The graph below highlights that total Canadian GHG emissions are projected to be 742 Mt in 2030 under the December 2016 emissions projections (Environment and Climate Change Canada)Footnote 1. Canada’s target is 523 Mt.

Projections from the December 2016 emissions projections include revised forecasts for GDP and oil and gas prices and productionFootnote 2. Also incorporated are new federal, provincial and territorial government measures that have legislative or funding certainty as of November 1st, 2016 and were not included in the 2015 emissions projections. These include: federal measures for increasing energy efficiency of equipment in buildings; Ontario’s commitment to join the Western Climate Initiative cap-and-trade system; Alberta’s coal phase-out, carbon levy and oil sands emissions cap; Quebec’s regulations for new high-rise buildings; and, British Columbia’s low carbon fuel standard. 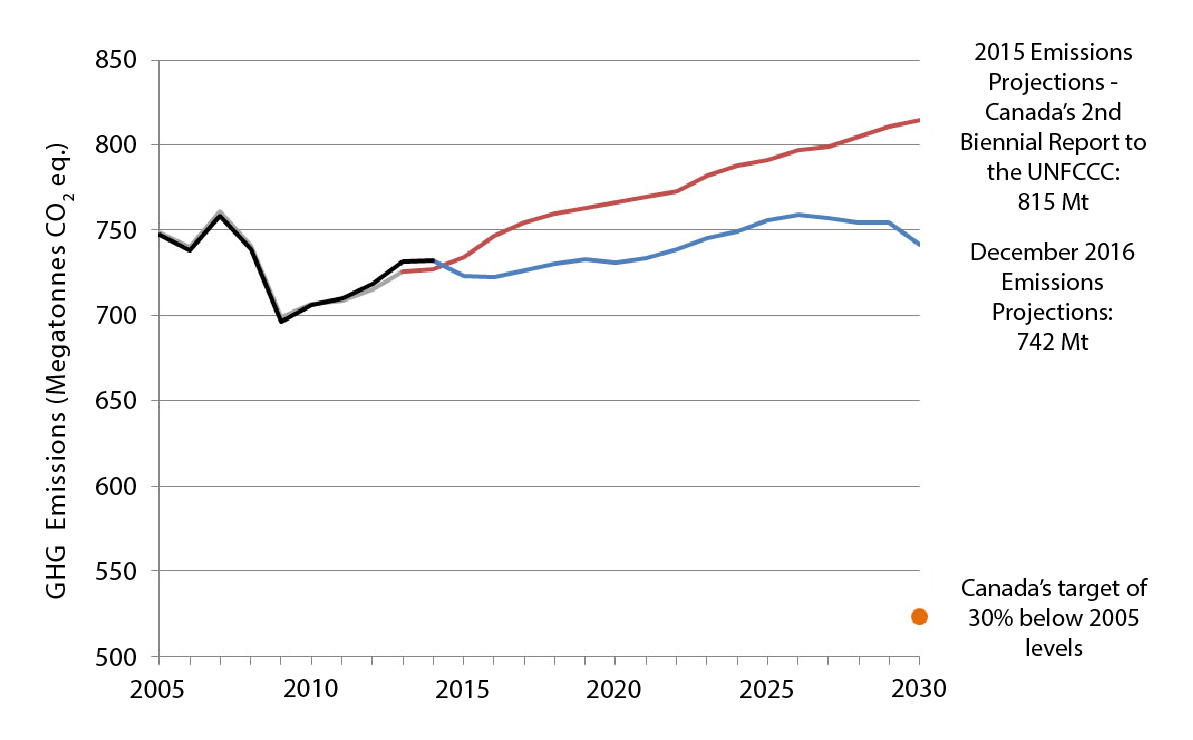 Canada’s 2016 greenhouse gas emissions projections to 2030 will be released by Environment and Climate Change Canada in December 2016.