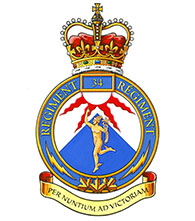 The 34 Signal Regiment is an Army Reserve unit belonging to the 34 Canadian Brigade Group and is based in Westmount, Quebec. Its mission is to ensure fast and secure IT services in support of other 34 Canadian Brigade Group units, in order to provide commanders with effective command and control capabilities. To accomplish its mission, the 34 Signal Regiment operates modern communication systems, including secure digital High Frequency and Very High Frequency radio systems, land-based satellite systems, computer networks, and fiber optic and copper wire line systems.

The unit is composed of Army communication and information system specialists and signal officers, supported by a team of logistic officers, clerks and supply technicians. With a wide variety of backgrounds, our members include professionals, students, public servants, tradespeople, businesspeople and academics. Their combined range of experience and expertise contributes to the success of our mission.

The 11th Signals Regiment R.C.C.S. was renamed the "15th Independent Squadron R.C.C.S." in 1965; following the unification and reorganization of the Canadian Forces, it became, on April 1st 1970, the "712 (Montreal) Communication Squadron". On May 8th 1976, the "712 (Montreal) Communication Squadron" officially changed the royal Corps of signals representative insignia at an official parade, adopting the new communication and electronics Branch insignia.

In October 2010, the “712 (Montreal) Communication Squadron” is officially renamed the 34 Signal Regiment.